Borrowing heavily from Stronghold and RimWorld, Going Medieval attempts to commingle those influences within its own authentic framework of survivalism, hardship, and progress. The game had only recently started its journey through the early access phase on Steam and Epic store, and for a moment, it looked like we had one more viral hit on the orbital trajectory. But asking for another Valheim-type phenomenon would be super unrealistic since Going Medieval is still in its „bare-bones but lots of promises“ phase. An extensive roadmap is accessible from the main menu, which illustrates a very long path that developer is yet to take. Still, the game shows solid potential. 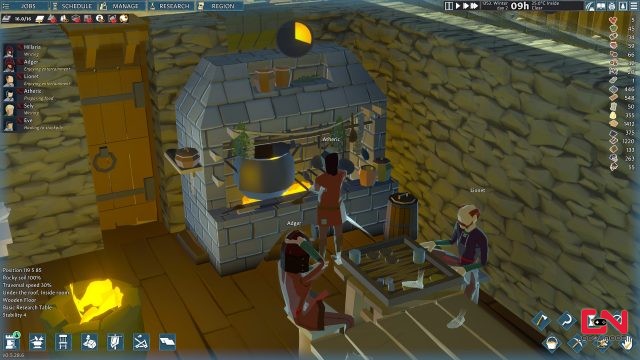 Going Medieval is a village builder game set in the late Medieval period of Britannia. Running away from the Black Death, a small group of refugees banded together and decided to establish a community far from the cities ridden with the Bubonic plague. With only the clothes on their back, some essential tools, a and small quantity of supplies, our commoner heroes proudly taketh the reins of destiny in their own hands.

„Ninety percent of living is logistics“, the maxim applicable for both modern and medieval times, is the gameplay staple of almost every colony simulator on the market. Our settlers will need to work hard to survive the harsh conditions of their new home – sowing, reaping, logging, mining, hunting, cooking, smelting, and lots of other chores will help their fragile community avoid starvation or freezing to death in the winter. They will also need to defend themselves from bandits and various other militants that will occasionally raid their village. Even the wolves will make their existence miserable from time to time. 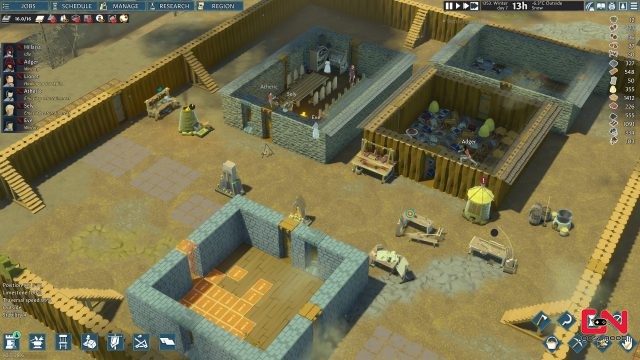 But taking care of the food and shelter will be the first and the last thing on your mind. The game is doing an excellent job simulating the seasons, availability of crops, and food perishability ratings. During the summer, raw, unprocessed food spoils quickly, forcing you to stockpile it underground or preserve it if you had the means. Researching the „technologies“ such as smoking the meat or making the pickled vegetables with vinegar are the smart options for those long, lazy summer siestas. How cool is that? Not many similar games attempted this hard-core, realistic approach to taking care of the food supplies. 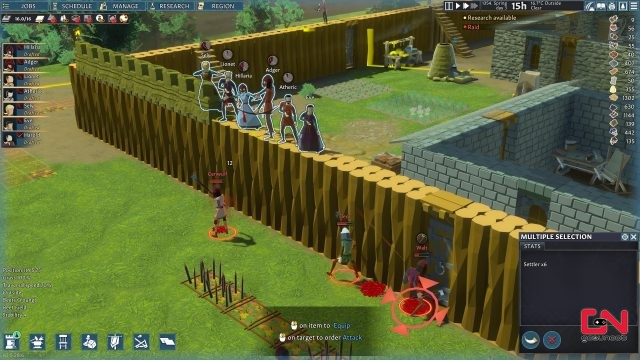 Eventually, you will outfit your people with the clothes, armor, and arms you either loot from the dead bodies or craft yourself, completing a chain of supplies, crafting stations, and know-how. All the labor is automatic and can be finely tuned and scheduled with the system of priorities. Interface for setting those is elegant, simple, and essential for adequately utilizing the talents of each settler. Those talents are randomized at the start of each game, and every newcomer in your community will have his or her unique ratings for each supported activity. Good archers and intellectuals are premium, though, as most of the other stuff such as cooking, mining, and plant-tending can be quickly leveled up just by repeatedly doing it.

Going Medieval currently has several gameplay modes, including a non-violent one where you don’t need to worry about the raiders. Games can be further customized by deciding about the locale for the village (valley, hillside, or the mountains) – some important features and resources, mainly the amount of fertile soil and availability of minerals, will depend on that. There are traces of the campaign narrative, but most of the content is currently missing, or it’s filled with placeholders.

Of all the things that are still need to be implemented, animal husbandry is my number one priority. I don’t know about you, but I’m having a hard time experiencing a medieval village without chickens running around or cows grazing peacefully on the nearby meadow. Also, homes don’t have chimneys. Who lives like that? 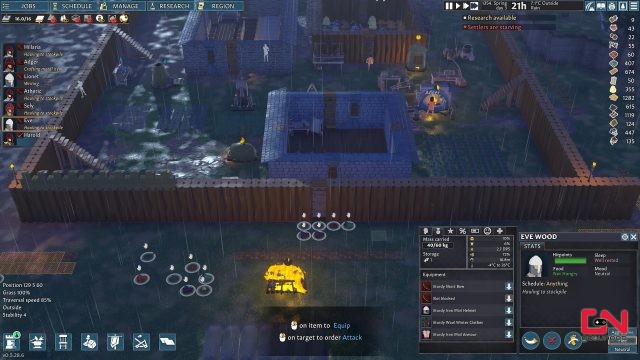 Generally speaking, stuff still under development and waiting its turn to be added makes a very looong list. Colonists still do not interact with one another apart from automatically tending the wounded person – there is no talk, no romance, nothing that would suggest that we’re dealing with the real people. Since there is no mating and sex, there is no child-bearing or caring for the young. In rare instances when RNG “allocates” you the child, as I had experienced in one of my games with the kid refugee who joined the community, the game treats it like any other adult. I promptly outfitted him with armor and crossbow and put him on defense when its pursuers came knocking. Religion and leisure are still bare and exist in praying to the wooden idol and playing backgammon. Also, many things regarding regional relations are simply not there; there is no trade with the nearby communities, no diplomacy or interaction of any kind save for becoming the target of their raiding party.

Medieval times are universally romanticized as an age of heroism, piety, and great deeds, but Going Medieval tries and mostly succeeds in depicting the grim reality of logistical challenges related to pure survival. The game is not overly depressing as Banished was, as we still don’t have children dying from dysentery in this one, but only time will tell how the overall tone will develop. 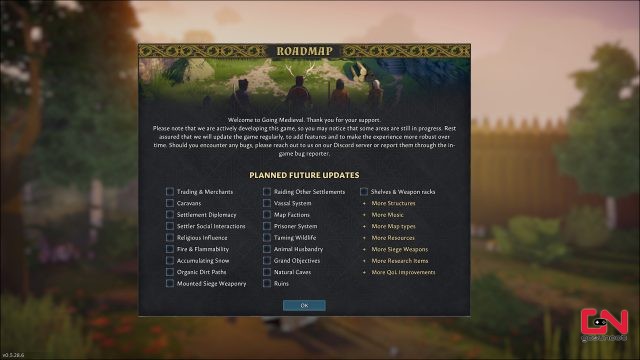 From the standpoint of the average player, there are a ton of fully realized, completed city-building games out there, so you must take it on faith that the developers will respect their own roadmap and deliver the complete product worthy of your time and effort. For now, Going Medieval proper exists only as a promise of things to come.