Treasure hunt is an optional objective in Prey. It involves finding four treasure maps given to members of the Fatal Fortress gaming group lead by Abigail Foy. Each map holds a clue – when you find out what they point to and visit the locations, you’ll be able to get your hands on a special reward. The maps aren’t easy to find, but deciphering the clues is even harder. In this guide, we’re going to help you complete the Treasure Hunt optional objective, by showing you all Prey treasure map locations, explaining the clues and helping you piece together the key.

To start the quest, you’ll have to check out Danielle Sho’s computer in the Crew Quarters. There’s an email called “Treasure Hunt” there, which explains the backstory and adds the objective to your quest log. 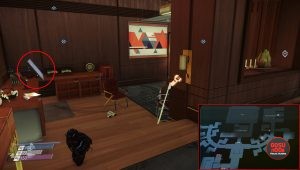 Note: The first portion of each section will point to where the map is hidden, while the second will show you where the map points to. If you want to crack the maps yourself, avoid the second pair of pictures in each part.

Location: This map can be found in the Arboretum. It’s on the first floor, near the airlock. You can get there by taking the Deep Storage elevator from the main floor. Once you get there, you’ll find the body of Zachary West. Loot his corpse to get the map. The clue points towards a room with three circular objects in the middle of it.

Solution: The solution is in the Life Support area. There’s a water treatment facility on the second basement level (B2). The location the map points is a wall with a large number 3 written on it. Zoom in on the number until the piece is registered in your quest log.

Location: Elias’ map can be found in the Crew Quarters. It’s in the recreation center, on level 2. Once you get there, you’ll see a large table with a giant Fatal Fortress screen above it. The map is on the table, next to Captain Stabfellow’s character sheet.

Solution: The solution to Stabfellow’s map is right there in the Crew Quarters. Go to the recycler room on level 2, west of the Yellow Tulip. When you enter it, you’ll see a large 6 on the wall, next to the recycler. Scan it so that you complete the objective.

Location: Emma has her map on her person. She’s still alive, and you can find her on the first level of the Crew Quarters, in the hallway in front of the fitness center locker room. Sadly, she’s being mind-controlled, so you’ll have to deal with her on way or another.

Solution: To find Rosalyn’s clue, you’ll have to go to the Cargo Bay. Once there, get to level 1, and head for the GUTS loading bay, in the southwestern corner of the map. You’ll find the number 5 on the wall near a container. Scan it to register the clue.

Location: Danielle’s map is on her workstation, on level 2 of Deep Storage. It’s in the command center, but it’s guarded by a thermal phantom and several mimics. There’s a turret nearby that can help you out.

Solution: Melindra’s map points to the GUTS. Her clue is in the Fuel Storage, right next to the elevator and the entrance to Shuttle Bay. Zoom in on the number 1 written on the wall, until your quest log registers it.

After solving all the puzzles, return to Crew Quarters. You’ll get your reward in Abigail Foy’s cabin. We managed to open the “safe” with the following combination 3165. However, the game seems to randomly piece together the keycode from the numbers you find on the walls as clues – etiher that, or there’s a bug. You’ll probably have to try more than one combination before you unlock the treasure.


Important Note: Don’t try to cheat! If you try to enter the code without solving all treasure maps you’ll get a chip blueprint with a debuff that reduces crawling speed and the intensity of the flashlight.

NEXT POSTPrey for the Gods becomes prey of the trademark law