RE3 Railway puzzle is one of the challenges you’ll face in Resident Evil 3 Remake. It requires you to enter a sequence of letters and numbers into a strange machine, in order to guide the train from Redstone Street to Fox Park, past blocked tunnels and closed platforms. If you’re having trouble with it, this guide will show you the subway train route puzzle solution in RE3 remake.

How to solve Railway puzzle?

You need to guide the train from Redstone Street, through Faust Avenue, Raccoon Central Station and Saint Michael’s Clock Tower, into Fox Park. The closed tunnels (marked red on the screen and with Xs on the map) will determine the platforms you need to use.

With that in mind, the solution is (from top to bottom) RE 01, FA 02, RA 03, SA 02, FO 01. Once you’ve entered the combination, press the green button below the dials, and you’ll get confirmation that everything is working from Carlos. 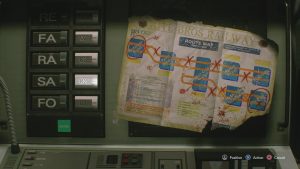 It’s a simple puzzle, once you’ve grasped the concept. It’s quite obvious that the letters represent station names, but the second dial is where you might get stuck. Especially if you focus on the poster, which lacks clear markings for them and is much more muddled than the big mechanical display on the wall. If we’re being honest, that was probably the whole point – they knew most players would rely on the poster, since it’s visible when you’re using the dials.