Resident Evil 7 Biohazard is out, and as any big game does, it’s already causing problems. Players are reporting crashing, framerate issues, network problems and more. Some of these are a cakewalk, only a few clicks away from a fix. Others are more serious, and will have you waiting for a patch. In this guide, we’re going to show you a list of known errors & problems in Resident Evil 7, how to avoid or solve them.

Some players have been having issues with streaming their RE VII experience via the PlayStation 4. Trying to usually ends with the “Cannot use the selected feature with this application” error message popping up, even when all other games stream just fine.

Unfortunately, it seems the issue is that North Americans are still blocked from streaming Resident Evil 7. Fortunately, there might be a work-around for it. What you need to do is record your gameplay through the standard PS 4 share feature (double-tap Share). Then, open the SHAREFactory app and import your gameplay video. Play the video and press L2 to make the video full screen, then double tap the Share button. Basically, you’ll be recording your recording. Let it play from start to finish, and you’re good to go.

If this is too much hassle, you can just wait for Capcom to fix the issue. They’ll probably get to it soon.

Resident Evil 7 Not Launching on Windows 10

Although Resident Evil 7 should be a Play Anywhere title, some people are reporting problems with the game not launching on Windows 10, although it is downloaded and your Windows is updated. There seems to be an issue with the contact between the game and the DRM servers in North America currently. Several people contacted Microsoft support to no avail.

Your best bet is to wait it out until the issues are handled on Microsoft’s side, but in the meantime, you can play the game on Xbox One if you have it. Once the issue is resolved, you can continue playing on your Windows 10 PC, because your save will get transferred between the two systems.

Season Pass Redeem on Xbox One – Not Showing up in Purchased

Several people have reported that they have redeemed their physical copy season pass codes in the Xbox store, but it does not show up in their game library or as purchased. Check if you can go to the Xbox store and find the RE7 Season Pass. If it shows up as purchasable (you can see the price and continue to the purchase screen), you might have this issue.

For now, we recommend you avoid redeeming the season pass code until Microsoft resolves the issue, but if you did do it already and are having the problem, please get in touch with MS support. They should be able to help you out.

Once you install Resident Evil 7 Biohazard on Steam and try to launch it, you might get the “Preparing to launch” screen and then nothing happening. There are several problems that might cause this. First, try doing the following. In your Steam library, right-click on Resident Evil 7 and pick Properties in the menu that shows up. Go to the Local Files tab and click on the Browse Local Content button. This should take you to the folder where RE7 is installed. There should be a file there with a different icon named re7.exe (you might not see the exe at the end if file extensions are hidden on your PC). Double click it to start the game that way.

If it reports that some dll files are missing and it can’t launch the game, you are probably missing one of the Windows updates. Google the specific missing dll to see which update contains it. In all likelihood, it is one of the Visual Studio C++ redistributable packages that you need to update. Try finding it on Microsoft’s support website or check out this page with a list of redistributables (Microsoft support page as well). 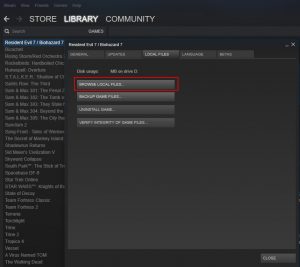 You can also find the redistributables in the game’s folder. Go to the game’s folder as described above and there should be a folder there called _CommonRedist. There should be a DirectX installer there. Feel free to run it to update your DirectX installation (this won’t break anything – just update your system). Same goes for files in vcredist folder – you have the Windows 64-bit version installer (vc_redist.x64.exe) or the 32-bit one (vc_redist.x86.exe), so run the one appropriate for your Windows version (again, these are official Microsoft files you can find on the Internet as well, but are provided with the game and might not have installed properly during your Steam install).

If you are not getting the error about missing dlls or the game launches briefly and then crashes, you can try another trick. Right-click on the executable in the game’s folder (the text above describes how to find the game’s folder and its executable) and you should be able to Run as Administrator. If that does not help, try right-clicking on the executable and going to Properties. Go to the Compatibility tab and check the “Run this program as administrator” checkbox, then click Apply and OK. Try running now to see if it helps.

Some PC players have been experiencing issues with the game freezing for a second or two every so often. It happens usually just before some kind of event is supposed to happen, like Jack jumping out at you. The game runs fine otherwise, but it ruins the moment, since those players always know something is coming when the game freezes. It’s more of an annoyance than a serious issue.

One thing that might help is disabling the shadow cache, but it’s not a surefire fix. Otherwise, you can only wait for Capcom to fix this issue.

A few players have been reporting the game looking blurry for them. For some, it seems that it happens only outdoors. For others, it only happened at the start in the car, and for the really unlucky, it looks blurry all of the time. This happens even at Scale 1. It seems to happen a lot on 1920×1080 screens.

There’s no definite fix for this issue, but playing around with the settings might help. First, make sure that your resolution is set to default. Also, try turning motion blur off, as well as Fxaa/Taa, and anything else that might soften the image. Interlaced rendering might also cause some blurriness, so try switching that to a different setting. Hopefully, one combo of these settings will make the game sharper for you.

NEXT POSTResident Evil 7 How to Defeat Multiple Molded Guide