There are eight (8) Tower Emblems in Episode One of Resident Evil: Revelations 2. The Emblems are shiny, round coins scattered around the area that you acquire by shooting them. Once you destroy them, you’ll receive acknowledgment of your achievement. Four of them are found in the Claire and Moira scenario, and the other four are in the Barry and Natalia scenario. Collecting all Tower Emblems gives you the Secret File No. 1, as part of the Record called Collector (Episode One). This reward costs 500 BP and it gives access to the secret file Stuart’s Memo – Claire and Moira 1.


Claire and Moira Scenario
This scenario is the first part of Episode One. You can collect four Tower Emblems during this part. Three of them are inside the facility you find yourself in, while the last one is in the open, near the end of this part of the game.

Following the mission path, you’ll end up in an area where you have to collect the Experiment Block Key from the dead policeman who had fallen down from the hook. Ladders that take you in and out of this area are where the first tower emblem is found. It is located behind this ladder, but in order to collect it you have to go back to where you came from, to a higher platform, above this area. Only then can you have a clear shot with Claire.

Further into the story you reach the part of the facility where the first Workbench is. In the room next to it is a cogwheel next to the dead body, under a torture device with a large number of spikes. The cogwheel is essential for completing this part, as it opens the main door later on. The Tower Emblem in this room is found just on top of the torture device. You have to climb the nearby platform in order to see it.

The next piece is found just above the Gear Kog mechanism where the cogwheel is needed. You have to look up in order to notice it, as it is high up on the ceiling.

The last part is found on the side of the bridge that connects the main facility with the radio tower. Once you walk over the bridge turn left and look at its side. It hides the Tower Emblem.
Barry and Natalia Scenario
This scenario is the second part of Episode One. It contains four new Tower Emblems. If you have missed Tower Emblems from the first part, you can also collect some of them now. Two of the new trinkets are found inside the facility, while the last two are found in the open, later on.

Just as you start this part of the scenario, you and your follower will climb up to the facility area. Don’t go into the facility yet, but look for a gate with two large metal boxes nearby. Behind these boxes is the first Tower Emblem.

Further into the facility, you find out about Natalia’s ability. This is where she notices the large group of enemies nearby. Once you clear them, you can collect the Tower Emblem found just next to the locked door, on the metal shelf.

The bridge that your previous part protagonists used for crossing over to the radio tower is broken now, and you have to go through the woods. Soon enough you stumble upon a new enemy. As you leave the house where he spawns you should see a lamp post. The light from this lamp post reveals the location of the next Tower Emblem. It is hidden behind the metal barrels and the bushes that the lamp post’s light shines upon.

The large metal gate that leads to the radio tower is locked, and you have to power up the nearby crane to break through. This area is where the last Episode One Tower Emblem is found. It is located in the eastern part of the lumber yard, next to the pile of lumber and three metal bars. In order to acquire the Emblem, use Natalia’s ability to throw bricks. Aim toward its location and throw the brick. If you are precise enough you should get it. If not, try again with another brick.
Stuart’s Memo – Claire and Moira 1
Once you exchange 500 BP for this reward you can check it out from the Gallery / Secret Files section of the game. If you want to avoid spoilers be sure not to read the text in the picture below! 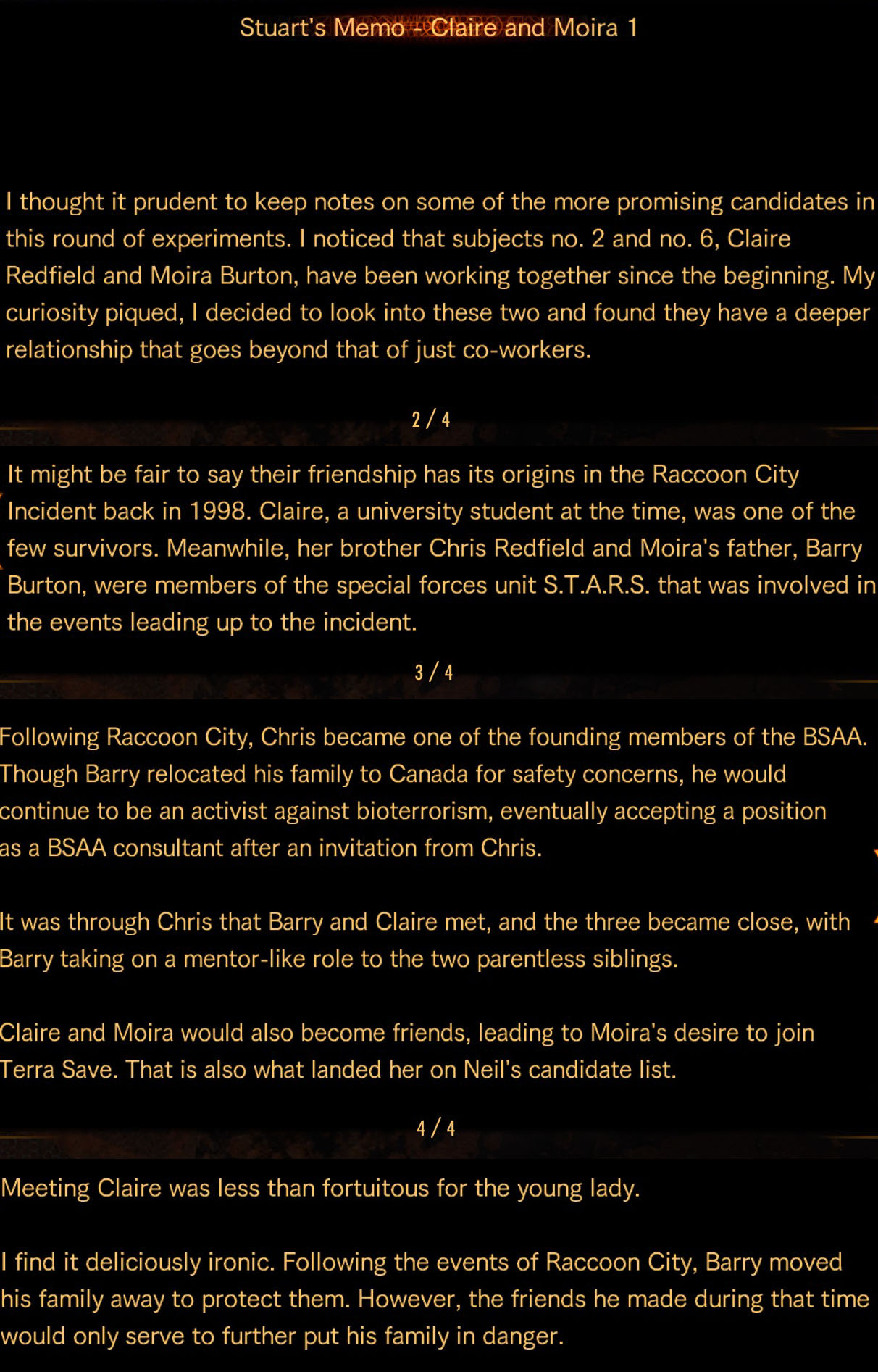