While watching the 1978. World Cup, Yoichi Takahashi came up with the character of Captain Tsubasa, a manga hero who, in an unbreakable synergy with his friends and teammates, goes through a wide variety of situations on the soccer pitch. The comics sold like hot cakes (over eighty million copies), so Captain Tsubasa quickly became one of the most popular mangas, earning an anime adaptation. One of the factors behind the success was the rising popularity of soccer in Japan.

When it comes to video games, Captain Tsubasa titles only became popular in the nineties, and the last game in the series (not counting mobile games) came out ten years ago. As a result, fans have been waiting for Rise of New Champions with growing impatience…

Realism Need Not Apply – How the Game Feels

Unlike classic Japanese RPGs, Rise of New Champions has nothing to do with magic, pets, and fantastical environments. For the most part. Namely, even though this is a unique representation of soccer, players have access to superpowers. These include kicks, precise passes, or epic saves by the goalie. Furthermore, aside from Stamina bars, players also have Spirit bars. Filling these up unlocks special moves, tricks, and speed boosts. Regular moves amount to jack squat, so it’s of vital importance to chain mean dribbles, literally snatch the ball from opponents with sliding tackles, and executing passes with utmost precision. You’ve probably guessed by now, but it bears repeating – Rise of New Champions is not a simulation; it is an arcade games with shades of strategy and, of course, role-playing elements. 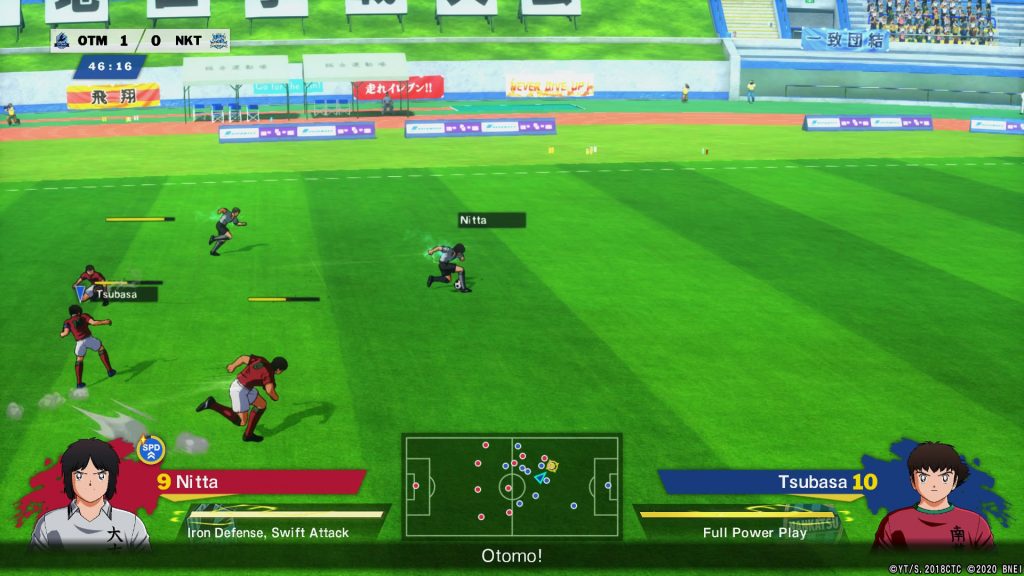 On the one hand, the game’s handling feels very slow. It feels like players take forever to overcome empty spaces, almost like they’re running in place. Movement animation is rudimentary, which adds to the impression of sluggishness, but does lend the game that necessary anime look and feel. Duels with opponents are everything; you have to use the dribble button when attacking, while sliding tackles are essential while playing defense. You don’t want to give opponents too much space on the pitch. Moves can be chained; combo dribbles not only grant speed boosts, but fill your kick strength scale faster. Some players have a higher class of kicks, so you have to fill the scale twice. Even that doesn’t guarantee a goal, because goalies “suck out” the spirit scale. You constantly have to put them to the test until they finally relent.

Simple Does Not Mean Easy – The Deceptive Difficulty

If you come into Tsubasa expecting a classic sports game, you won’t get far. At first, you’ll be delighted at the uncomplicated controls and the laws of the pitch, but that comes at a great cost. Rise of New Champions is so difficult that you’ll be spending hours and hours trying to get the ball behind the goalie. This happens even on the easiest difficulty setting! Since there are no fouls, the opponents will pummel you with rough tackles, after which you have to scramble to defend your goal and start planning your attack from scratch. You’ll lose the ball easily, and if you don’t manage to power your shot up in time, you have no hope of scoring. 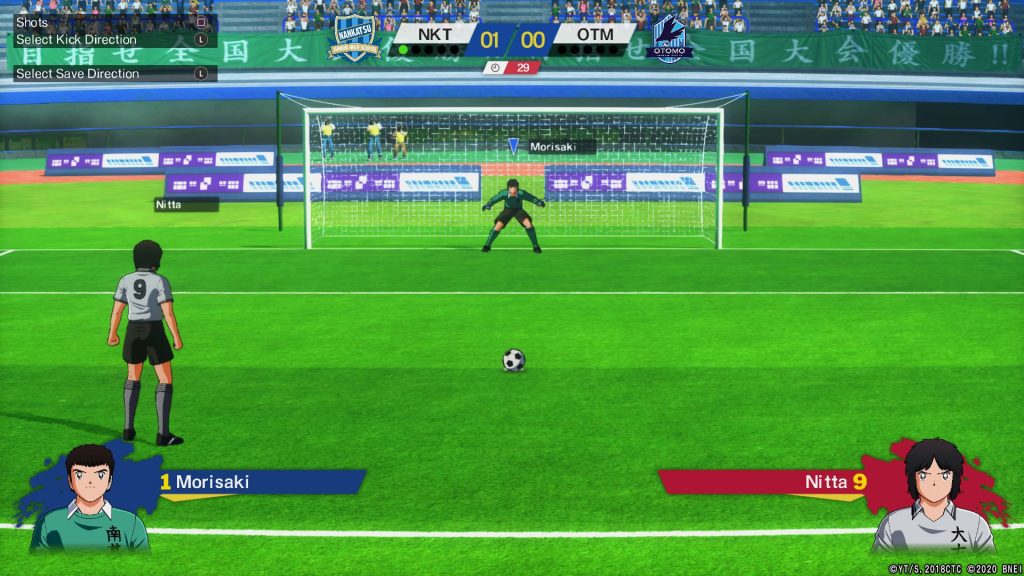 In case of a draw, the game goes into a penalty shootout, which uses a pretty straightforward mechanic. You choose between one of the available targets that you can shoot at and press a button. It gets even more direct when you come close to the goal, since you don’t even have to press anything to shoot.

The Two Story lines of the Single Player

You should complete the offline campaign before you get into online matches. The single player has two episodes, one of which takes you through the adventures of Captain Tsubasa and crew. This is the recommended starting point. Here, you’ll be able to control ready-made players and follow the incredibly well-written story. You can’t really affect its course, and have to win in order to continue it. We should add that the original voiceover is fantastic. In combination with the cutscenes, it really gives the impression of enjoying an interactive anime. 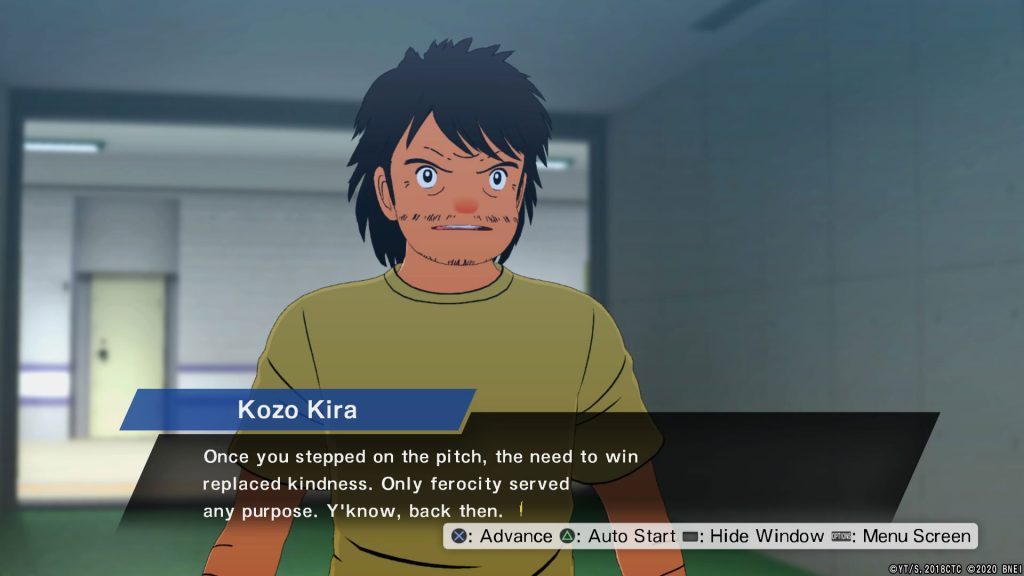 The second episode puts you in the shoes of a fresh-faced wunderkind, whom you’ll have to mold yourself. This includes choosing which position you want to play. Although the content here is richer, your avatar’s lack of training, which you’ll be working on from match to match, will drag you down.

From its technical characteristics and story to the unusual approach to the unfolding of a “regular” soccer match, Rise of New Champions is simply brilliant. If you love anime, especially Captain Tsubasa, getting this game is a no-brainer. You will blow through hours and hours playing it and enjoying the many dialogues and twists. The visual presentation is excellent, rivaling the TV show. However, all that will mean very little if you’re a mainstream player.

Ignoring the fact that the game is difficult to master, after a while, you’ll notice that you have to rinse and repeat the same group of actions, and that there’s not much room for improvisation. You won’t be able to get into playing without diving deep into the uniqueness of each character; if you’re not a fan of anime, the job becomes that much harder. The game lacks that “special something” to become a big hit, that “X” factor that “regular” players just won’t see. 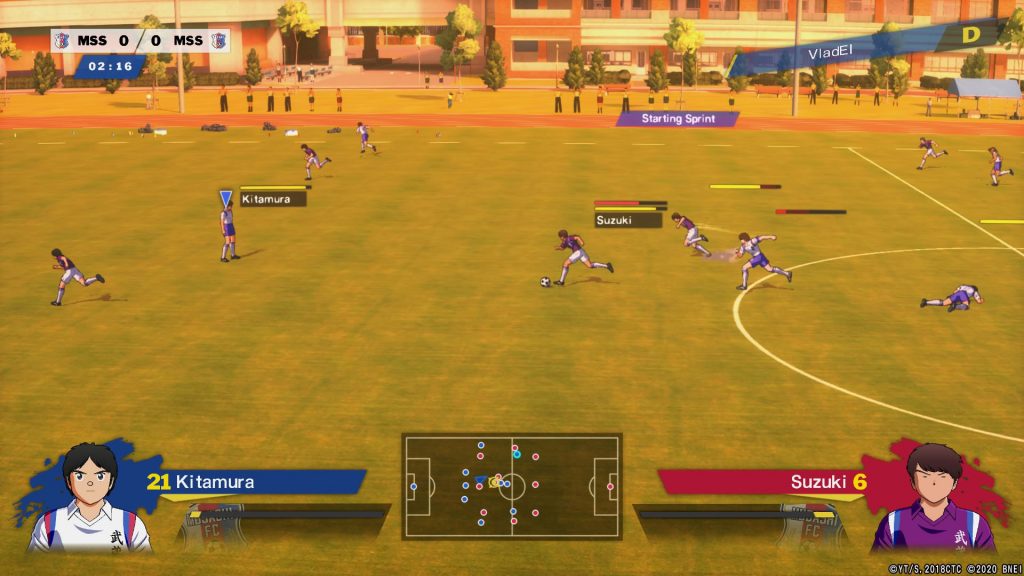 Had the developers turned to the gameplay style seen in FIFA Street back in the day and incorporated that into the already existing mix, we’d be singing a different tune. As it stands, you’re left to burrow deep into the mechanics, go through all the tutorials (which the developers did not skimp on) and trudge through the hefty grind in order to build your skills up to the point necessary to enjoy the game fully. 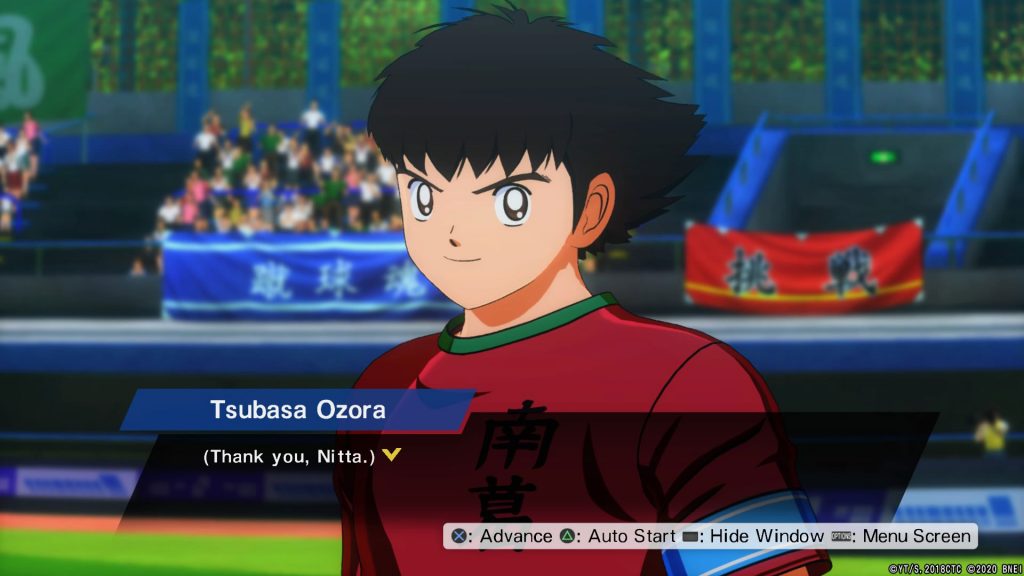