In some nicer, pandemic-free parallel universe, the first automobile game published exclusively on Playstation 5 is Gran Turismo 7. An invisible but impenetrable quantum barrier separates our two Earths, so there is no way that anyone there hears our sighs, deeper and more resigned after Sony announced yet another delay. While we wait for 2022, Gran Turismo 7, and probably COVID-22 PRO, we can try to enjoy something else. Yes, something lesser, you heard it right…

Destruction Allstars is Playstation 5 exclusive game centered on cars. And “stars”. It’s not a racing game at all, but arena “demolisher” similar to Wreckfest without vehicle customization and mostly aimed at the millennial multiplayer audience. It’s next-gen, it’s exclusive, and best of all, it costs zero dollars/pounds/pesos/rubles/whatever, provided the customer already pays for PSN+. On paper, it’s a winner; spend few hours playing, and you’ll see that it isn’t so. 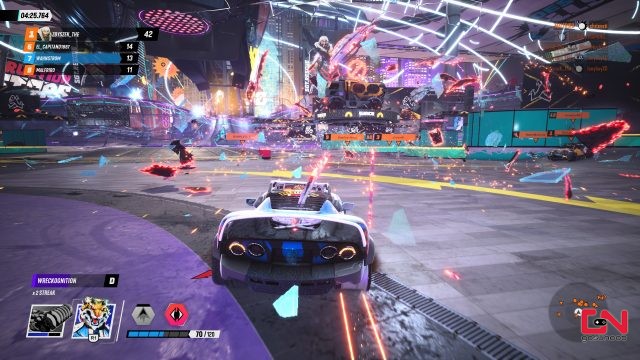 After the brief tutorial, Destruction Allstars presents you with several options. Multiplayer is the game’s main attraction, but there is also an offline practice mode you can play with bots and a series of single-player challenges that try to tell a bit of the origin story of the few contestants. It’s very Overwatch style, but quite lite and with the minimum amount of plot and characterization. Only the first of those mini-campaigns is free, though, and the rest can be purchased with premium currency, itself obtained with real money. Monetization doesn’t stop there, as most premium cosmetic items in each category require hard cash. This is perfectly understandable for a freemium game, but Destruction Allstars will not be free forever – you have until April to claim it, after which it becomes a 19,99 USD/EUR title. In April, every bit of it will become a hard sell. 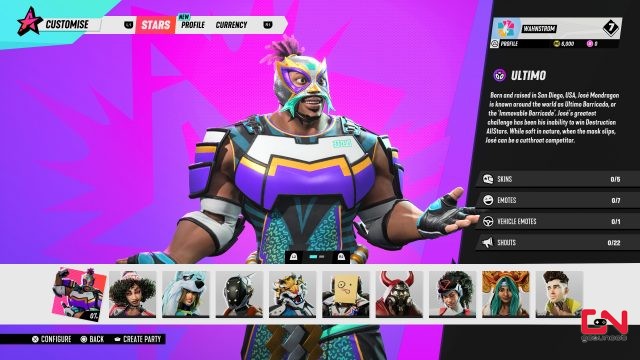 Destruction Allstars has four multiplayer modes. First and undoubtedly most popular is Mayhem, a free-for-all destruction derby for sixteen players. You win the match by collecting most points in six minutes by ramming opponents’ cars or rolling over them if you manage to catch them on foot. It’s straightforward in every conceivable way, with an arcade driving mechanic that is immediately grasped. Vehicles vary in mass, top speed, and stopping power, so you need to calculate all that when confronting the competition – if you drive fast and nimble coupe, it is generally a bad idea to ram heavy SUV frontally. Besides general collisions caused solely by inertia, you can initiate targeted “bumps” in front and both sides, but those actions have a brief cooldown. After a while, you will have enough points to summon your signature vehicle, which comes with a unique special ability, mostly offensive in nature. 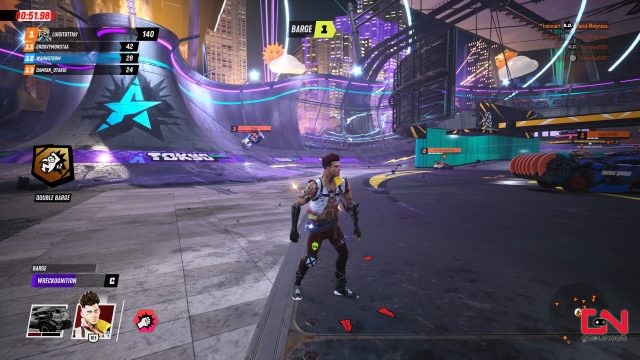 If you played Titanfall, you know that bailing out of damaged Titan is preferable to a fiery death in the cockpit. The same logic applies in Destruction Allstars – you can abandon the car at any time and try to get the new one, either by stealing it from the competitor (again, very Titanfalley) or getting the fresh spawned one. While on foot, you are extremely vulnerable to the cars zigging and zagging around, but you still can attack other similarly disadvantaged players.

And that is all there is to it. You can extract some additional fun by trying different drivers, or “stars”, but pretty soon, you’ll conclude that the only measurable difference between them is the signature ability of their unique vehicle, a factor that comes into play once or maybe twice in every match, for ten seconds or so. Each of them also has a different ability to use while on foot, but they are quite useless. Their colorful personalities and performance antics are, at best, utterly wasted effort in any way other than a purely commercial one – sixteen different contestants provide sixteen mannequins for purchasable cosmetics. But even those cosmetics suck, as most of them represent just the color variations of existing costumes or car skins. You’ll probably invest in a few fresh emotes until you inevitably get bored. 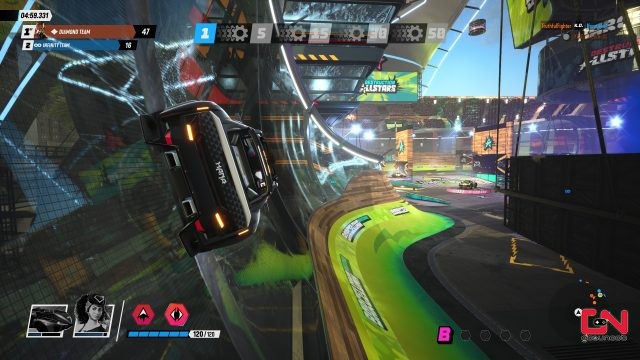 The rest of the multiplayer modes are arguably less attractive than Mayhem. In Gridfall, you don’t respawn after death, and your only objective is to remain the last player standing in the ever-shrinking arena. Carnado is a bit more complex than the previous two, requiring collecting points and banking them in the massive blue tornado in the middle of the map before your vehicle gets wrecked. Stockpile, the least popular one, is similar to Carnado, but points are collected on foot after the car is destroyed and placed in different spots on the map. 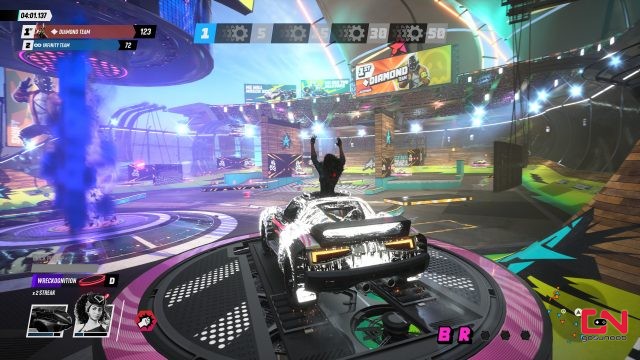 The main problem with Destruction Allstars is the inevitable boredom derived from the very basic gameplay and non-existing opportunity for showcasing individual skill. The game feels like complete chaos that no amount of trying or coordination between team members would sort out. This game may look like Rocket League with the added violence, but those two games are totally different beasts. Save for the impressive production values, Destruction Allstars is simple enough to be ported to Android or iOS, destined to be played in short bursts during an urban commute. Maybe that would be the worthy home for this game further along the road?