Video games industry is often compared to movies and other forms of legacy entertainment. We brag about the unstoppable rise of gaming, our many fiscal victories over Holywood, and other triumphs in this contest of the interactive new and the passive old, but we fail to comprehend one significant difference. Compared to the cinema, literature, and even radio, gaming celebrities are a complete joke. Not the “HAHAHAHA” kind of joke, but the jest that results in awkward silence. That is because we perform character assassination of our fledgling celebrities when they try to show us a little bit of skin or step out of the mold. We celebrate only the people who fiddle with our balls and tell us that we are breathtaking (most of us are not). 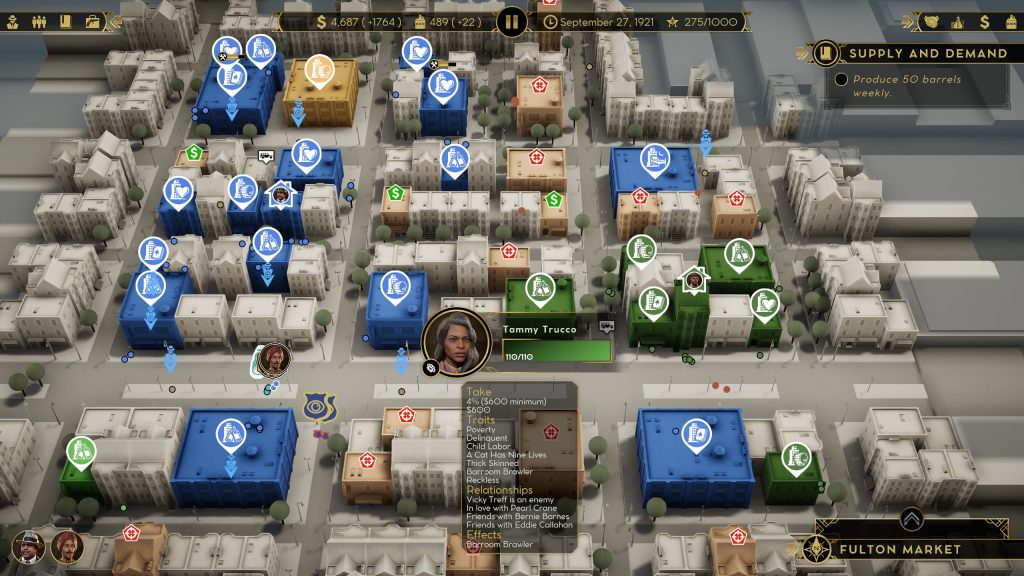 Some gamers were a nasty bunch long before Twitter came into existence. Twenty years ago, they practically canceled John Romero, one of the creators of the original Doom and Quake and inventor of deathmatch, when he dared to be a bit provocative in promoting his latest game. “John Romero’s About To Make You His Bitch” said the tag line on the Daikatana poster, and all hell broke loose. Giga-screaming amplified the failings of this buggy, mediocre but somewhat charming game, leading to the rapid downfall of John Romero, the auteur. 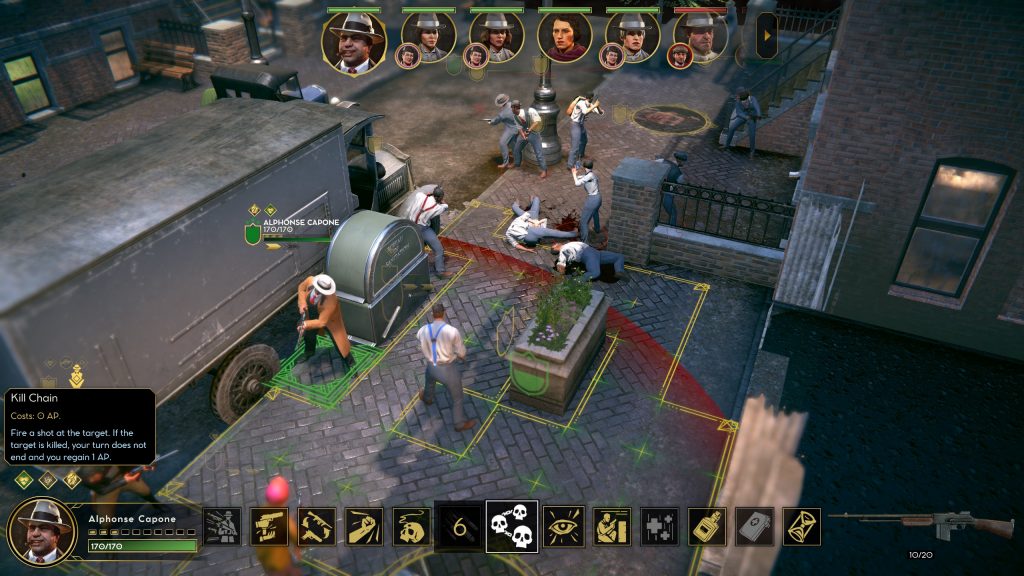 After the Daiktana controversy, John Romero’s career tanked – he never again attempted anything risky, nor assumed the lead designer role in any game more significant than Gunman Taco Truck for iOS and Android. Our take, one that he could very well deny, is that he never recovered from the relentless pulverizing he suffered then and continued to suffer ever since – almost any mention of him in gaming press in the past two decades had a mocking vibe. Yes, Daikatana was terrible, so it was Hercules in New York, one of the first movies starring Arnold Schwarzenegger. Nobody tried to bury Arnie for one cringe-worthy role.

The point of this lengthy intro was to demonstrate the power of organized negativity over the creative mind. John Romero is most certainly not Solzenicyn, but it sure feels like he tasted the Gulag archipelago of negative press and entitled perma-offended brats. Two decades later, we can still feel the Daikatana trauma echoes in the game he jointly developed with his fourth wife, Brenda. Empire of Sin is the mob simulator created with the intention of not stepping on anyone’s toes. This safe and predictable game commits several cardinal sins of an unfunny kind – it’s repetitive, acutely non-edgy, and predictable. This is the game produced by creators afraid of their creativity. 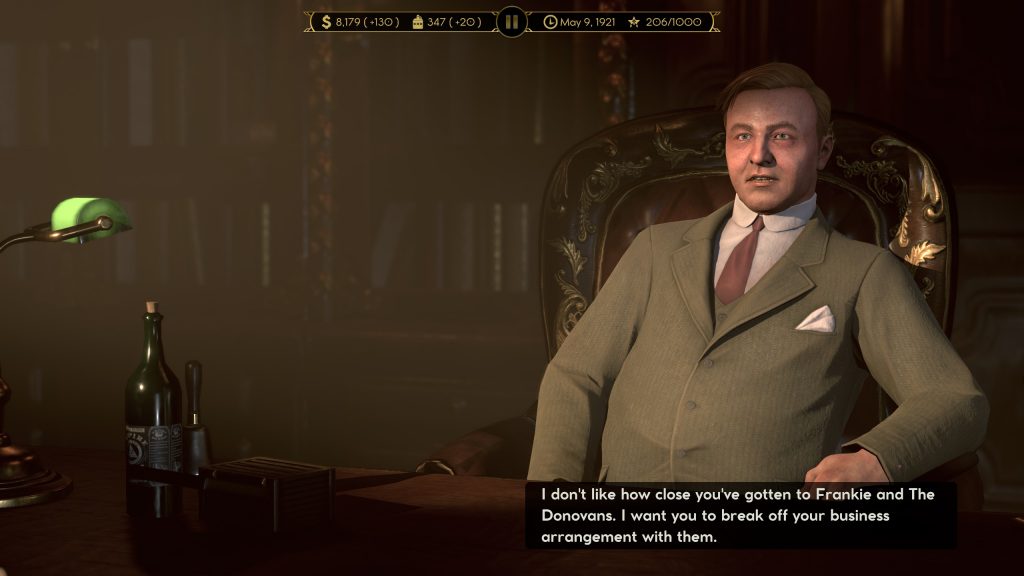 I never indulged myself in the life of crime, but I can safely assume it is anything BUT predictable. Empire of Sin is the game devoid of any surprises, any factors that would make your heart beat faster. The game depicts the golden age of the mob, American Prohibition that saw the rise of the larger than life mafiosos such as Alfonse Capone, Bugsy Siegel, and Lucky Luciano. Yet, it works and feels like an isometric spreadsheet.

Empire of Sin starts with the choice of the boss. Apart from the usual suspects like Capone, there are many other fictional characters, some but not all inspired by historical gangsters from the era. Once you lock-in the preferred capo, you get the quick introductory sequence in which you get to know the initial inns and outs of Chicago, a city you’ll need to conquer to win the game. The first hour or so is relatively exciting. You will learn how to take over a business and set-up one of several essential venues for generating profit. Apart from Speakeasies, you will take over Breweries, Brothels, Casinos, and Hotels as each of those has a vital role in the financial chain of your criminal empire. 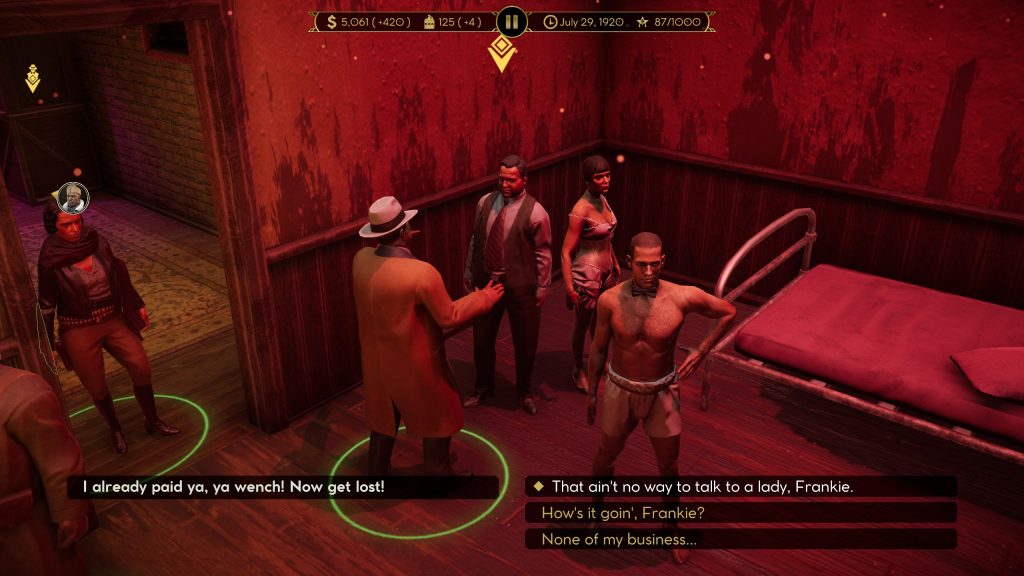 Although you have the freedom to chose which competing boss you will screw over and take his or her businesses and territory, the path you’ll take is always the same. You will need to invade their (well defended) safe house and kill everyone; do that a dozen times, and congratulations, you are the winner! You can opt to take it slow and gnaw their organizations one business at a time, but once you take over your initial neighborhood, there is no need for that. Your boss and his entourage will be leveled up and equipped with the best loot, so there won’t exist any real obstacle for a series of game-winning, rampaging assaults.

This is only one aspect of poor design that is abundant in this game. More important than this speedrunning feature/bug is the persistent tedium from going thru the motions of managing your empire. Building by building, business by business, you will click on upgrade buttons, wait for the process to finish, or rush it for the extra cost. Occasionally, you will consult the latest consumption trends in each neighborhood and decide which type of alcohol to produce and serve in your establishments. The heat you generate with police is quickly extinguished by picking one of several bribe options that are always available. The game flow is banally harmonious, which would be fine if we are talking about a gardening simulator. A curve this flat in the game about organized crime is just wrong. 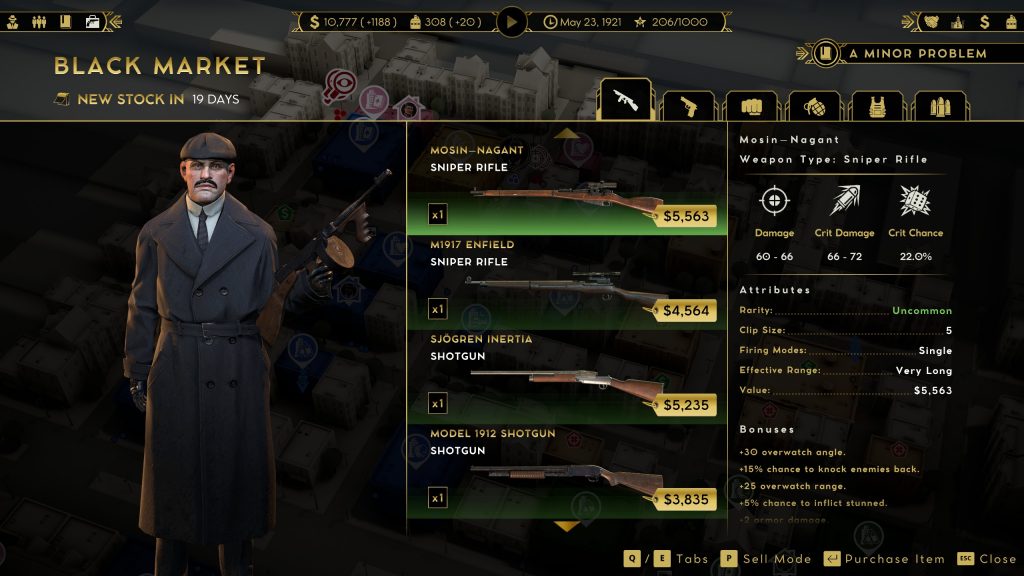 A little bit more exciting are the turn-based tactical battles, at least initially, before they crank up the tedium factor. They quickly wander off balance because of the overpowering abilities of the boss character. Leading Al Capone, I could unlock the talent that allows chain killing that goes on as long as you have ammo in the primary weapon, disregarding available action points and other limitations. Pure Terminator. 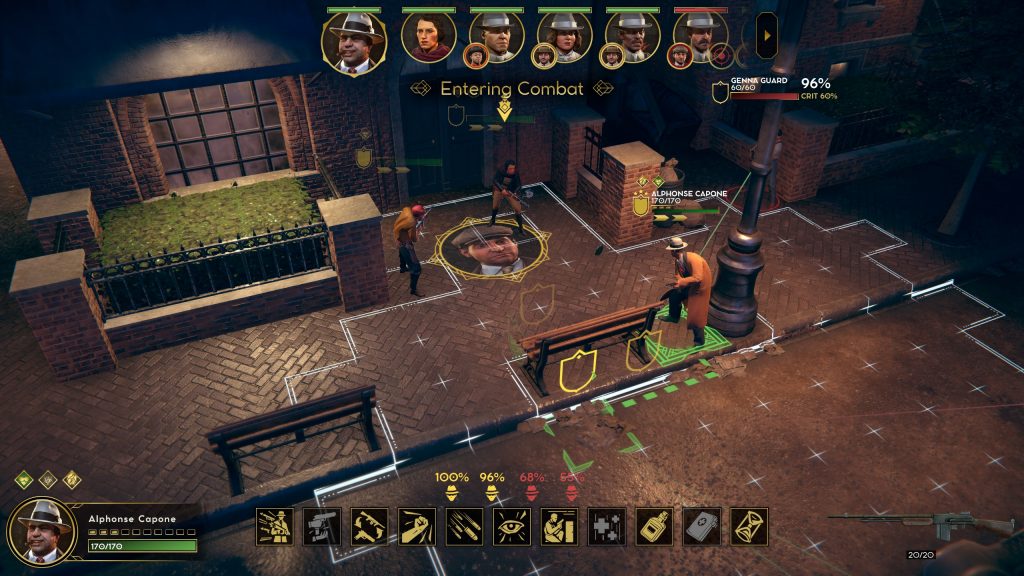 Empire of Sin is a sinfully dull game. No patch ever will be able the salvage this sorry mess full of bad design decisions. Its only saving graces are the rich production and solid voice acting, but that and more you can divulge for free from any mafia TV show worthy of cable TV.