I was in the mood for the lightweight, stupid simulated labor, and Gas Station Simulator delivered it in spades. Or gallons. Why did I single out precisely this game out of myriad “Simulators “that exist on Steam? I could have chosen among the giants such as PowerWash Simulator, Lawn Moving Simulator, Tank Mechanic Simulator, Ranch Simulator, or Food Truck Simulator. There’s also a Bum Simulator, a clear sign that we, as a species, are past due for a giant asteroid. I opted for Gas Station Simulator for one reason only. It massively outsold Deathloop in the first week of their simultaneous debut on Steam. The Voice of the People was loud and unmistakable, so I decided to follow it like a humble pilgrim of old. 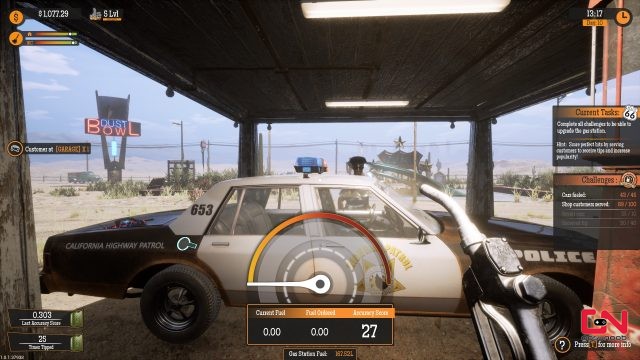 Gas Station Simulator is not the poster boy for a stellar first impression. On the surface level, it does almost nothing to distinguish itself from its “simulator “brethren. Those games are made (mostly) in Poland for (mostly) German audiences and (mostly) follow the same gimmicky pattern, relying on low price and low-level gags to attract the people. But GGS proved to be a massive success, relatively speaking, especially compared to one of the biggest games of 2021. What’s the catch?

After seven hours of filling up the tanks and selling booze and snacks in a shabby gas station on Route 66, I can honestly say that I don’t know. The game is repetition incarnate, the simulator of mundane, stupor-inducing, kinetic experience of one of the most depressing places on Earth. It has you cleaning the floors and toilets after the customers and emptying the trash cans. Is that something that anyone would want from their digital entertainment in 2021? More depression in a giga-depressing year? It seems that some people do. 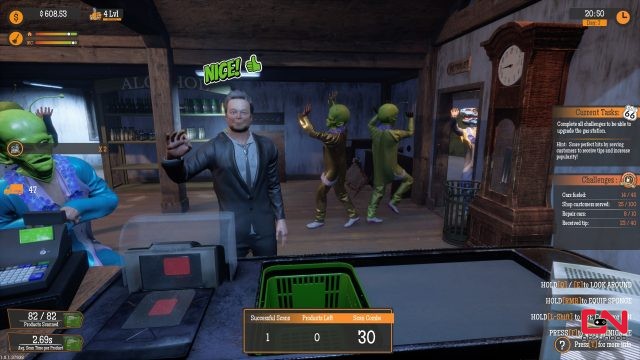 In Gas Station Simulator, you play as a young and naive entrepreneur gifted the old, derelict gas station by his shady uncle. The station, located on a dusty Californian stretch of the historic Route 66, was once vibrant and busy. It’s up to you to apply spit and shine and turn it again into a piece of prime real estate. Uncle provided you with a loan to finance the initial refurbish and stock up the fuel, snacks, and drinks. You will need to repay that loan eventually, and in the later chapters, you will experience the full rigidity of the strings attached to your “gift “.

Gas Station Simulator is not a tycoon title; it’s an in-your-face action game that (poorly) simulates manual labor and low-level asset management. You will serve the customers from the first-person perspective, selling them fuel, ice cream, newspapers, booze. Later, as your station expands, you will service and wash their cars. Most of all that manual stuff you’ll need to do yourself, as the option to recruit help becomes available only when you reach station lvl.3. Your station’s level limits the additional workforce, so you’ll always lag behind the amount of piled-up work and available help. 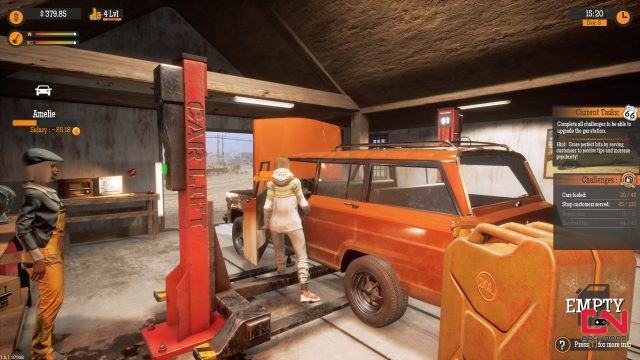 Each worker has a stamina meter and needs to rest after the shift, and you need to manually pay him for the services provided. You need to do that each time you wish to assign them another shift, which is arduous. The game seems to enjoy screwing with the player, completely depriving him of any reasonable automation. Was it so difficult to enable the worker to continue fulfilling the same task and collecting pay without chasing him around and engaging in a drop-down, faux-conversation menu several times each (game) day?

Replenishing the inventory is another menial job that should have been at least partially automated. In the beginning, gas, snacks, and soft drinks will be your only concerns. However, each expansion increases the amount of stuff you are selling and spending in the service station. Soon you will be ordering dozens of items, juggling with the limited space in the warehouse. Also, you will be unloading the trucks by yourself, and replenishing each shelf by hand. I have to credit the game for realistically simulating the panic generated by piling up of unserved customers. Everyone who had ever worked in retail could vouch for that specific mix of cold sweat and paranoia of being judged and looked down on. At least, in GSS, you don’t have a store manager, and customers are passive as neutered lemmings. They don’t give you the eye; they leave quietly if ignored for a long time. 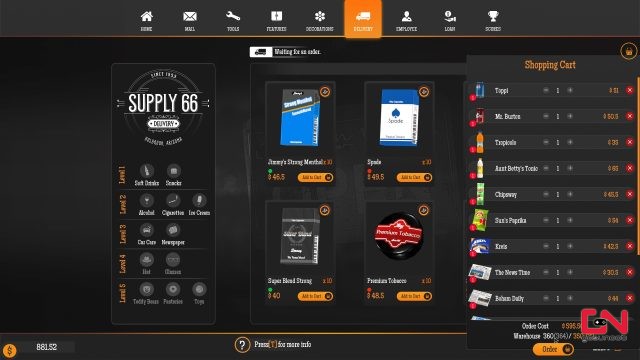 All of this doesn’t mean that the game is just one big chore deprived of any fun. Gas Station Simulator has its moments – they are rare, but they exist. For example, every once in a while, a bus will pull over, and a dozen cosplayers, presumably on their way to Area-51 themed convention, will descend upon your little shop, sometimes accompanied by a grinning guy that suspiciously looks like Elon Musk. Another time, you will chase a local kid that paints insulting graffiti over your outer walls, only to be robbed by his friends because you left the warehouse delivery door open.

Gas Station Simulator is a game with potentially great value to any parent concerned about their lazy progeny. When exposed to the reality of banally simulated manual labor, every young soul will reflect on it. If it’s mature enough to understand the concept of consequence, it will feel compelled to rethink its choices in life. Stay in high school or end up in the retail, being forced to smile at any Karen that wants Lucky Strike, but you only stock Marlboros. You can nag and nag for years until you turn blue, or you can explicitly demonstrate their optional fate with real, straightforward examples. That’s parenting 101 and the most significant value of Gas Station Simulator.

PREVIOUS POSTWoodlouse Bait New World – How to Get Snail Bait