This year’s first gimmicky roguelike has arrived. The Celtic oriented Gods Will Fall is the new deicide-themed game on the market, and this time we’re in for a mixture of souls-like fighting and roguelike mechanics. The gimmick is quite interesting, though– instead of one hero, you control a group of eight Celtic warriors Hell-bent to kill their tyrant gods. Shipwrecked on a god populated island called Overworld, our heroes tempt fate and defy faith one by one in ten different dungeons, each ruled by a respective deity. 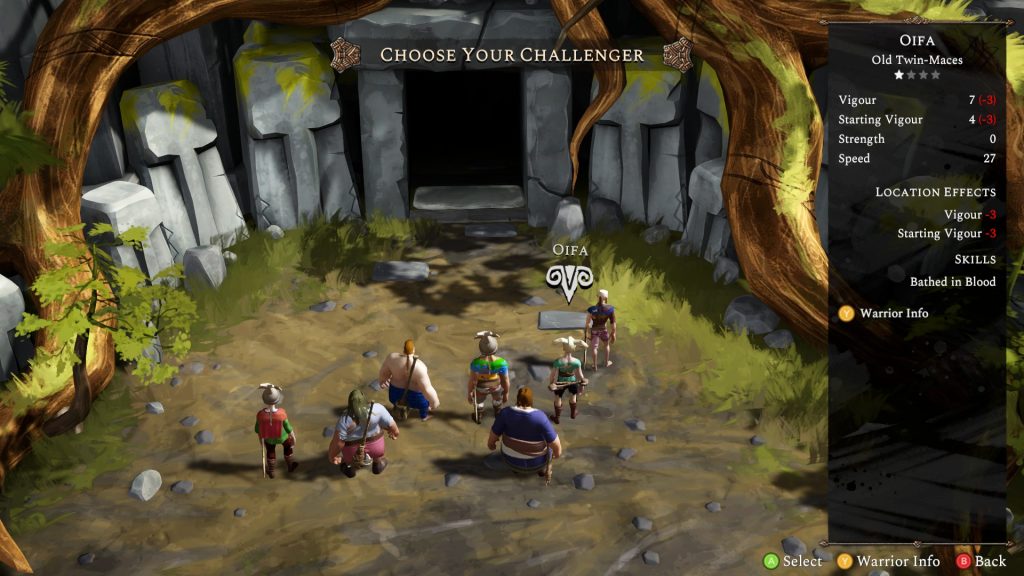 Each of the eight randomly generated Celtic warriors have a unique melee weapon, passive skills, stats, and sometimes a personal agenda that determines a special (de)buff when fighting certain gods. Even though it may seem the opposite, the colorful palette of characters quickly begins to pale. Once you restart the game and get a completely randomized set of new people, any past immersion is rendered non-existent. Anyhow, until all of them end up pushing daisies, or you select New Game, your Celtic bunch is stable.

The over-randomization of everything puts unnecessary hurdles between player and enjoyment. Each dungeon’s difficulty level is randomized on every run, and there’s no proper learning curve. Admittedly, this will provide a great replay value, especially for people who stream roguelike speedruns, but in terms of “fun”, it quickly becomes a chore. It seems that the developer Clever Beans delegated almost everything of consequence to a random number generator. 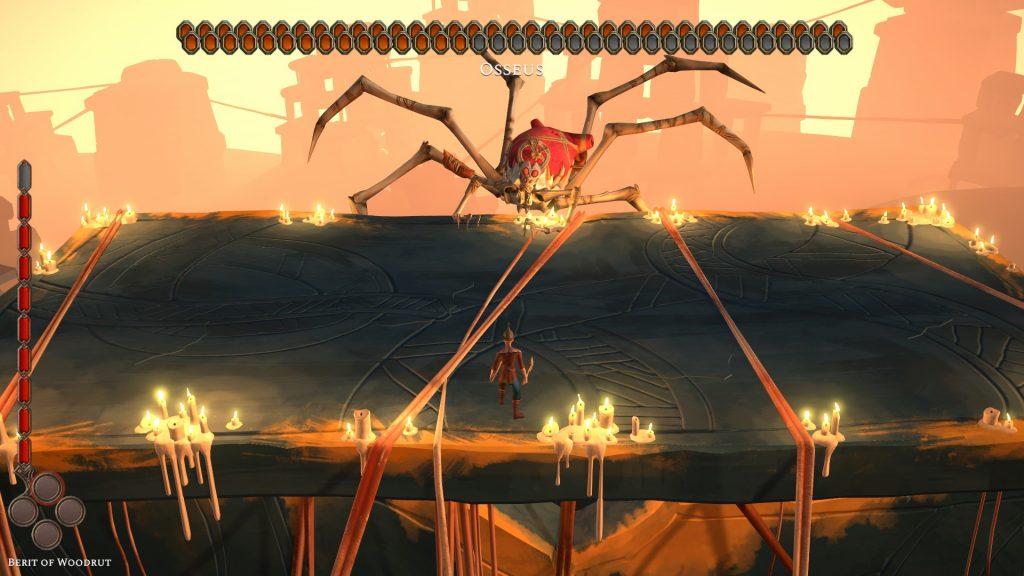 The most significant part of the game belongs to the boss fights. Not entirely faithful to the legitimate Celtic religious material, ten Celtic deities rule fiercely over their dungeons. Filled with infantry and special warrior Vassals, the dungeons are all thematically “fit” for their respective gods. For instance, the arachnid god of flesh and bone, Osseus resides on top of a realm of sinew and bone where you can loot bone traps and such; in the realm of Krannus, the god of knowledge, you can learn new skills, weapons can be (randomly) modified in Morrigan’s domain, since she was a forge master in game’s lore, etc. When you enter any of the dungeons, you will instantly see the presiding deity’s health bar. That’s because when you kill select units or some other elements connected to the gods, you’ll start draining their life. Once you reach the dungeon’s respective god, they are likely to have their health bar cut in half. 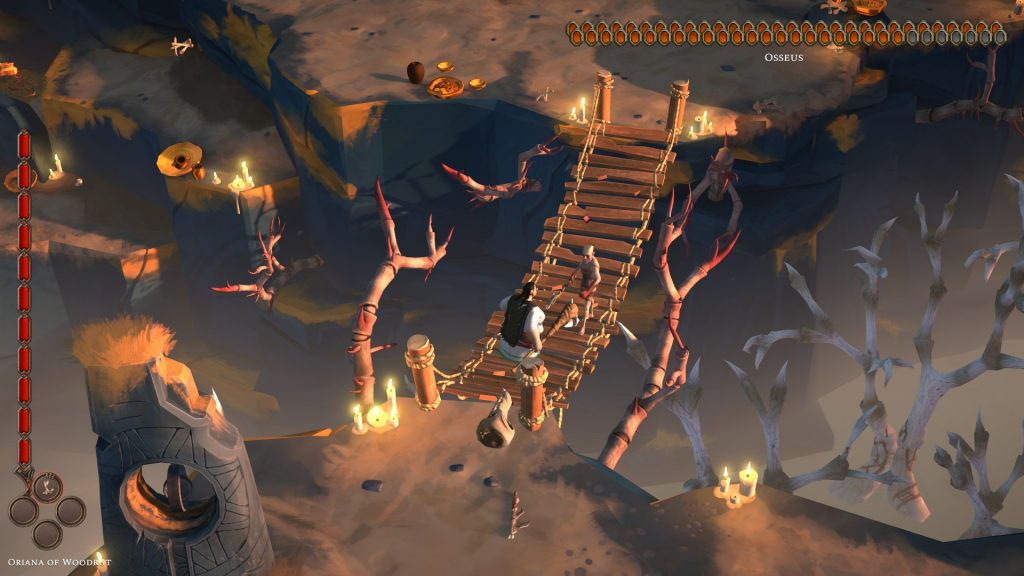 This part of the gameplay loop feels refreshing, and we can only commend the developers for the idea. Other aspects of gameplay will make almost everyone invested in the genre feel at home. There’s semi-helpful loot, slight character upgrade moments, challenging bosses, different enemies, repetitive fighting, death opportunity at every corner, etc. The fighting mechanics are probably too simple for their own good, but light attack, heavy attack, and dodge never seem to fail. At least on paper. The more enemies you hurt, the more bloodlust you generate. If you gathered enough of it, you could restore your health (called Vigor in the game). In short, you will be continually spamming the attack buttons and the restore health option. 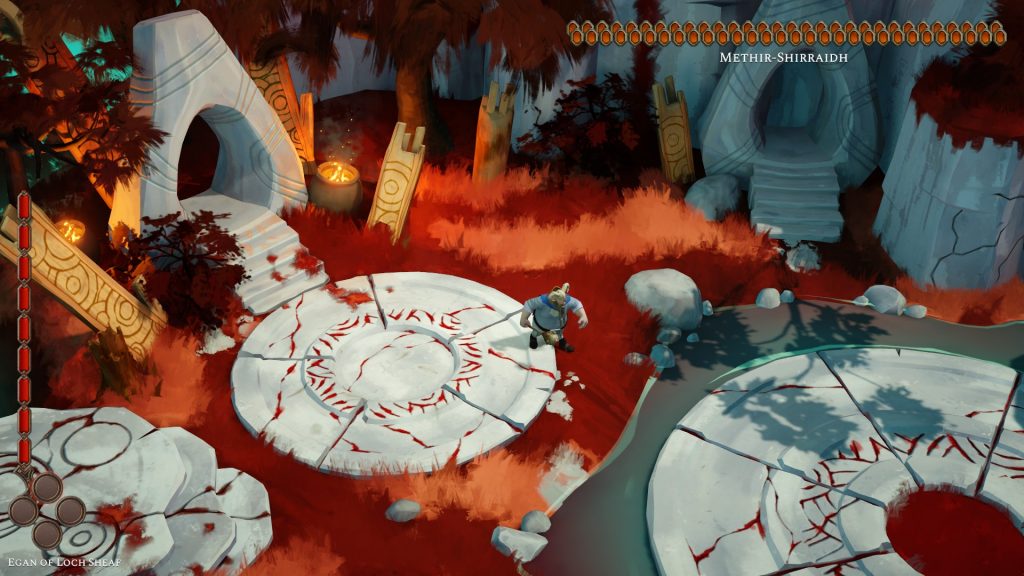 However, once you set foot in any of the well-crafted dungeons, GWF’s problems start to pop in. The simplified fighting mechanic is ruined with controls that are so sluggish you will begin to question your hardware. After trying the game with a wired controller, a wireless controller, and a mechanical keyboard (no mouse supported), the controls still had a frustrating latency and felt clunky. Since fighting enemies is not the only way to die, you will have to maintain your composure and try not to fall into an abyss every other minute. The characters move as if they are traversing an ice rink, especially when there are ledges nearby. On top of that, the camera sometimes positions itself so weirdly, you’ll have flashbacks from before 2010. The camera itself is pretty static, so that means that some number of dead angles and non-visible locations will happen to you. 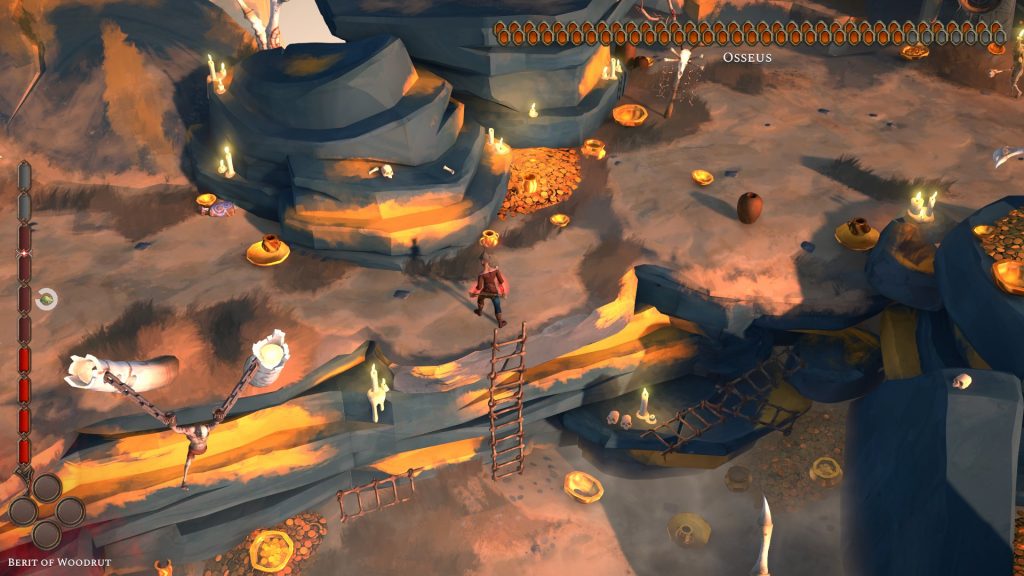 Speaking of flashbacks, the team clearly did not want to use any of the (supposed) power of the Unity engine so that you will look at smudgy textures, pointy models, and animation simpler than a 1970s cartoon. Given the setting and the properly used color palette, this is quite a shame. It’s hard to shake the feeling that putting this game in a Hades-like graphical environment would do it proper justice.

The aural aspect of the game can be put in the “good stuff” folder. The noises and cries of your characters and their targets are well executed and will help the immersion. Music will not blow anyone’s mind, but it serves the purpose with pompous and dramatic shifts. 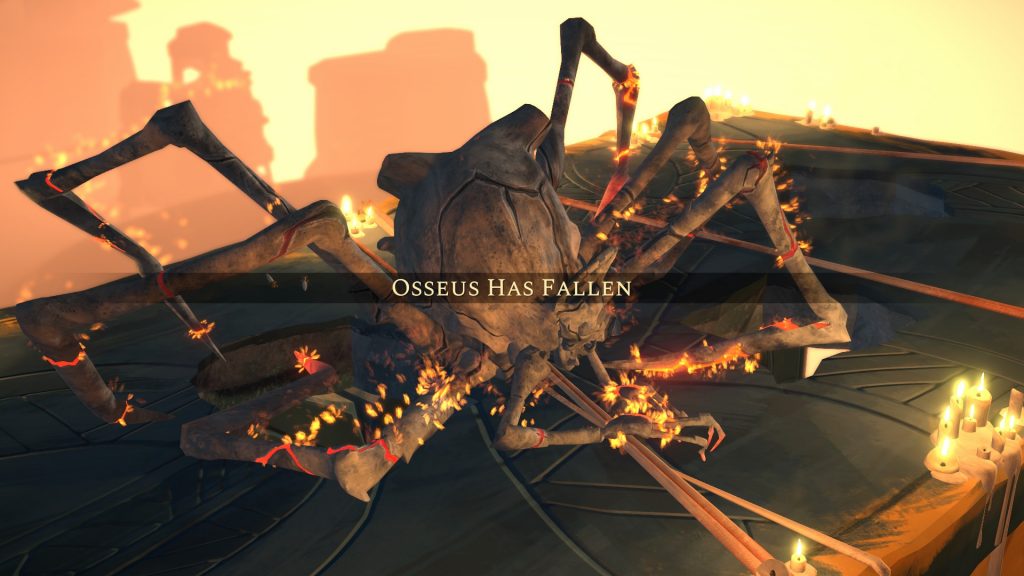 Overall, there’s an unshakable feeling that Gods Will Fall was conceived with many fresh ideas, but the development process did not follow them on. When properly implemented, the RNG system can be quite rewarding and will help the player experience. Here it makes the game your greatest enemy. The ideas behind the game ideas are refreshing and brave, but nothing can fix the lackluster basic mechanics. If we ever get an idea like this executed well like Hades or Hyper Light Drifter, it would be a proper game of the year contender. This, on the other hand, is just a disappointment.

PREVIOUS POSTThe Maw – Medium – How to Escape the Monster

NEXT POSTThe Medium Investigate Toolshed – How to Open Garage Door