I must admit that I never watched Rick and Morty. A couple of cringey hipsters from my old job enthusiastically talked about it all the time, salivatingly recapping each new episode, annoying the hell of everyone. Especially me. The fact that they perceived it as something cool was enough to put me away. Maybe it was a mistake? I don’t know, but it doesn’t really matter.

High on Life is a first-person shooter with Metroidvania elements, designed by one of the guys responsible for Rick and Morty. Since I’m not a fan or even familiar with his previous work, I’m uniquely equipped to render unbiased judgment to the game. Or unequipped? Maybe the fact that I’m unequipped makes me qualified to blab about it? Now I’m blabbing and can’t stop it. Should I insert a couple of fucks in the blab train? YES! Blabfuckblab! Cringeblab! Fuckcringeblab!

Getting High on People 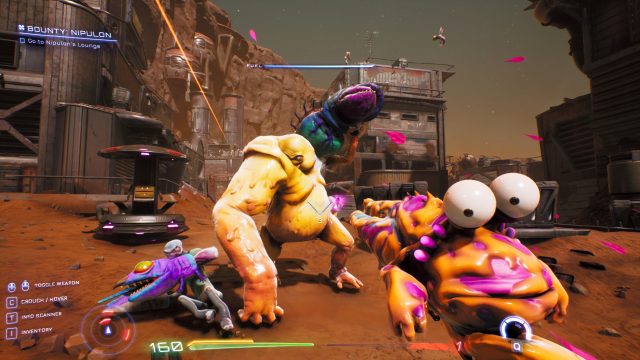 The blabbing. High on Life is a game about blabbing guns, blabbing NPCs, and blabbing bosses. Everyone talks fast, firing repeating soundbites left and right. Almost everyone swears. There is an occasional joke, but they are intentionally drowned in the sea of blabs. You need to endure all that for at least ten hours. And then the blabbing stops. Almost as if they weren’t sure whether the game was any good and decided to saturate you with indiscriminate talking. Playing this game feels like watching an insecure Twitch streamer spewing non-stop nonsense lest you change the channel.

High on Life starts with an alien invasion of American suburbia. You play as a generic teenager from the late nineties who witness the horror and stumbles upon Kenny, the sentient, slime-shooting pistol. Kenny will set you on a path of galactic revenge, as aliens obducted your parents and ravaged your neighborhood. You will meet Gene, an aging, deadbeat bounty hunter, and under his “guidance”, begin to dismantle the alien G3 cartel.

Cartel? Yeah, the Earth-invading aliens are actually a mafia that kidnaps people in order to turn them into drugs. Turns out, “inhalation” of humans is the latest craze in the ‘Verse. After the initial familiarization stint in the alien city of Blim, you will take on the short cavalcade of cartel lieutenants, taking them one by one before the inevitable confrontation with Garmantious, the big boss that looks like Jabba the Hut after the transporter incident. 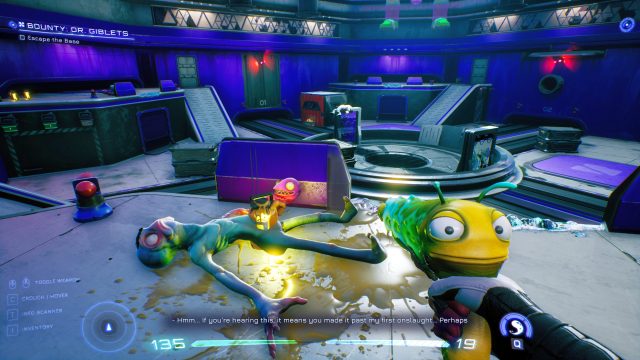 The stars of the show are Gatlians, weapons with personalities. Besides Kenny, you will find, use and listen to Gus, Sweezy, Creature, and Lezduit. You will also have the privilege to meet the acquaintance of Knifey, a sociopathic blade. Besides different personalities, every Gatlian is equivalent to one classic FPS weapon. Gus is a shotgun with disc-launching alt-fire, Sweezy is a modern take on Halo’s Needler, Creature is a grenade launcher, and Lezzduit is a sort of energy-channeling BFG you get to use only in the finale.

All of them comment on stuff almost all the time, but you can turn off non-story-specific chatter in options. Their personalities might grow on you, but in my case, growth was less enjoyable than, presumably, feet fungus. Those Rick and Morty fans from my old office once described that too. True story. Every Gatlian’s special attack comes in handy in navigating the vast levels, working as classic route openers present in every Metroidvania. Sweezy can slow down time, for example, which opens up paths through air ducts initially blocked with high-speed fans. The game has a limited number of environments, so expect a lot of backtracking during the campaign. Once you obtain a jetpack, lots of those alt-fire traversal utensils will become obsolete, though. 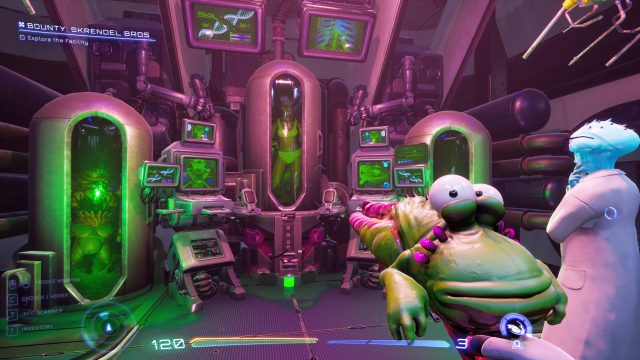 As a shooter, High on Life is mediocre and way too easy. There are only a couple of different enemies, and they present no challenge whatsoever up until the end. The game relies heavily on multi-wave arena fights, which is the only way to raise the endgame stakes that the developer could think of. Boss fights are a bit more challenging, but like environmental navigation, they become a breeze with the jetpack. Just jump, avoid AoE attacks, hover a bit when needed and you’ll be fine.

With the money earned in bounties or find in chests laying around you can purchase various upgrades for your and your guns, making the game even breezier. You can purchase extra health, more rapid ascent, and greater max height for your jetpack and various mods for every gun alt-fire mode. With Multiglob Mod, for example, you can turn Kenny’s weak slime mortar into multishot barrage and WTFPWN groups from a safe distance. 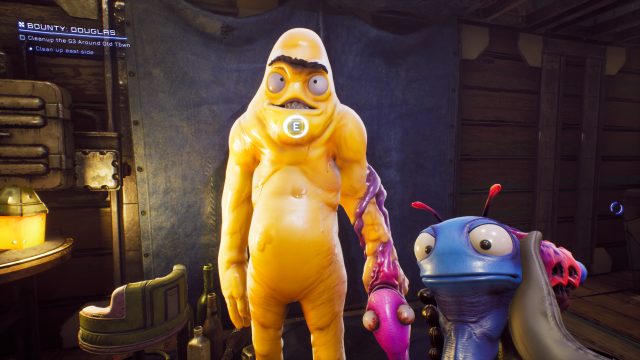 Finally, I must address humor, the main selling point of High on Life. In the absence of a better definition, I would call it “Safe NSFW humor”, as just air quotes are not enough to convey its gaping emptiness. Every joke is a butt joke, and every controversy revolves around bodily penetration, fluids, and fucks. Lots of fucks. Neverending and omnipresent as Terrance and Phillip fart jokes, High on Life humor stabs your consciousness with stupid insistence on boring perversion. In the current repressive cancel climate, perversion is the only permitted controversy, even if it’s just a simulacrum of it.

Again, it is evident that creative brains beneath High on Life, at least subconsciously, know that their narrative is crap. So they optimized its delivery to machine-gun levels of exposure. There are a lot of essential and optional conversations in this game, and most of them are BRADAMBABMFUCKFUCKBRANAL or something similar. To be fair, the game has a few substantial and even wholesome moments, but those feel like commercial breaks in the storm of farts.

High on Life. Low on everything else. Avoid this game if you consider yourself a person of culture.