Want to know all Genshin Impact 3.4 Character Banners? We’ve got you covered! The version 3.4 update will be the first major patch for the popular gacha RPG in 2023. Developers at miHoYo are working hard on bringing a plethora of fantastic new content for this update. And while most of this is secret, the leaking community has already gathered a lot of information on what we can expect. Read on to learn more about Genshin Impact 3.4 banner leaks, including Character and Weapon Banners. 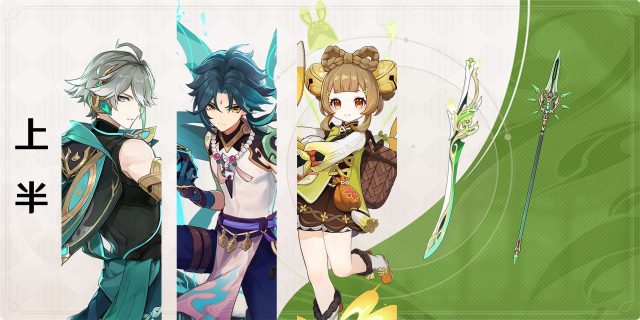 The Genshin Impact 3.4 Livestream is set for the first Friday of 2023, and that’s when we will officially learn about the next major update for Genshin. However, the Genshin data-mining community is one of the most active in the world of gaming. They are responsible for a constant stream of reliable leaks about new content, characters, and banners! Yukizero, one of the most well-known and reliable Genshin Impact leakers, has already revealed many details regarding the 3.4 update. This, of course, includes character and weapon banners. According to Yukizero, there are the banner phases in Genshin Impact 3.4:

Alhaitham and Yaoyao are the two new characters officially mentioned by the developers. Thus, having their banners is almost confirmed. We will probably have to wait for the live stream in order to learn more about them. However, Team China has recently leaked Alhaitham and Yaoyao’s gameplay, where we can see these two new Dendro characters in action. Based on this footage, Alhaitham is a sword-wielding DPS character, while Yaoyao uses polearm.

Furthermore, when it comes to rerun character banners, leaks suggest Hu Tao and Yelan will return in phase two of Genshin Impact 3.4 Banners. Hu Tao was last featured more than a year ago (November 2021), and given her popularity, it’s a perfect time for a rerun. For now, that’s all we know about Genshin Impact 3.4 Character Banners. When it comes to 3.4 Weapon Banners, the first phase will feature Alhaitham’s weapon, Light of Foliar Incision, and Xiao’s Primordial Jade Winged-Spear.

PREVIOUS POSTHigh on Life Review – Low on Everything Else

NEXT POSTHow to Get Golden Guns in Overwatch 2