Back in the day, when the world was young, maidens fair and Cold War between USA and USSR was still going strong, there was a company that developed legendary games as a matter of routine. MicroProse’s portfolio included Civilization, Pirates!, Master of Orion, Master of Magic, Gunship, X-COM: UFO Defense, and many other exquisite titles. Some of them became the bedrock for the franchises still thriving today under a different corporate umbrella. But a series of bad investments slowly eroded their financial fortitude, which forced them into the vassalage for Spectrum HoloByte, Hasbro Interactive and Infogrames, before they finally went under the ice in 2003. They resurfaced in 2019. with new leadership at the helm as an independent publishing label, free of toxic old bonds and ready to take on the world again. 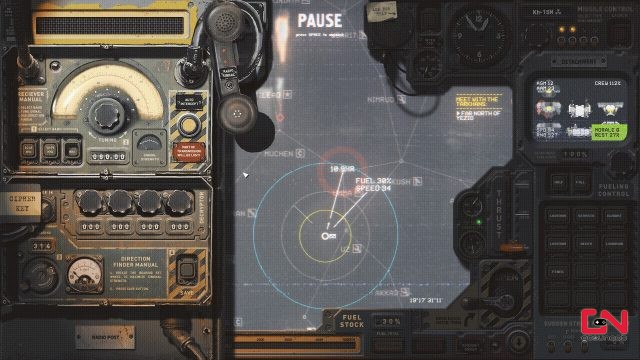 MicroProse’s first attempt in reconquering the stars is HighFleet, a unique strategy game that strongly emphasizes their ancient reputation for innovation and experimentation. This brilliantly weird and often frustrating game oozes atmosphere and has an identity that heavily borrows from Dune, Lawrence of Arabia, FTL, Homeworld, and Silent Service. You’ll get the bonus points if you know what Silent Service is… And Lawrence of Arabia. The game also has a gothic analog interface, and many of its core systems are unexplained or underexplained – on a few occasions, it felt like playing Falcon 4.0 all over again, but this time without a beastly 500-page manual that could answer most of the questions. 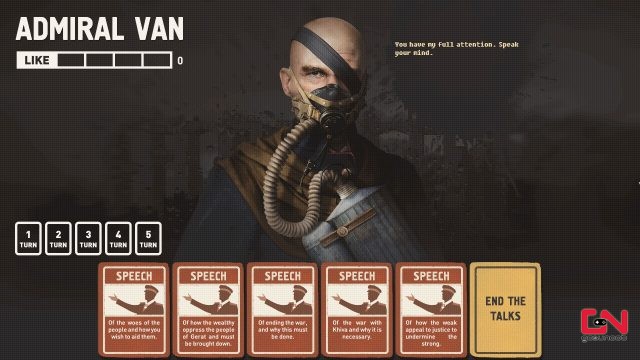 HighFleet is the game about managing an armada of giant, methane-fueled imperial flying ships isolated behind the rebel lines but determined to win the war by capturing the enemy stronghold. In a manner not significantly different than FTL, you will move your fleet from one destination to another, fighting along the way, replenishing the fuel, repairing damage, and enlisting more help against powerful rebels that brought the Romani empire to the brink of ruin. You’ll play as a Grand Duke, leader of the fleet, and son of the emperor who represents the last hope of his dynasty; the game also has bearded admirals with vaguely Russian names, a native population of pseudo-Arabs from the post-apocalyptic future, and the plot that involves ancient prophecy of a chosen one that will bring balance. Very „Duney“, isn’t it? 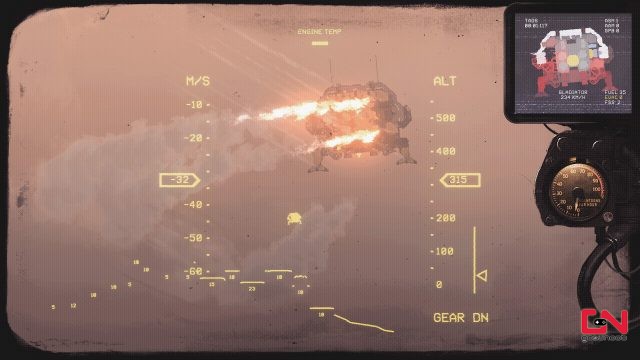 Before you dive into the campaign proper, you are strongly advised to complete the prologue, which serves as a (barely adequate) tutorial. There you’ll learn the basics of fleet command, combat, and logistics, and you’ll also get your first taste of frontier diplomacy. You’ll need allies and ships, and the proud desert people of Gerat province can offer you both. When you feel ready to tackle the main event, an entirely open-ended affair contrary to the linear tutorial, you’ll be transported to the fleet composition screen. There you’ll need to balance a tight budget and assemble the fleet from ships with various tonnage, armaments, and price ranges. You can even design your own vessels using the arcane and overcomplicated construction kit, which I don’t recommend for the newcomer.

This is the first major hurdle for every new player… How am I supposed to know what ships I’m going to need? A limited budget means that I can’t fill my roster with heavy cruisers (biggest is the best, right?), so some intelligent compromise is in order. Do I need that expensive ship with a long-range radar? How about that aircraft carrier that costs as much as three corvettes? Maybe that fat bird that can carry nuclear missiles? Unfortunately, trial and error is the only way that anyone can learn here – with one armored foot in the late eighties, HighFleet is firmly entrenched in the concept of „game is the terra incognita inviting you to explore it the hard way“. 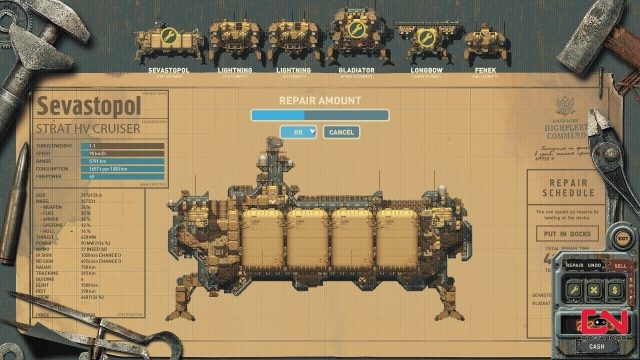 HighFleet dieselpunk aesthetics is impeccable, but the downside of the unique artistry is the interface which feels like it was snatched off some submarine simulation from the last century. You control the game from the bridge with a satellite map of Gerat and its settlements and all sorts of analog dials, gizmos, and mini displays on both sides. Almost every device on the bridge has a function that must be performed manually. Intercepting the radio signals, which is essential for the long time survival of your fleet, requires you to finely tune the frequency knob until you find the strong signal and then use a different dial to pin-point the correct azimuth; the result is often a partial message of the movement of some nearby fleet or ship, which can be unarmed escort you can capture for money or powerful hunter-killer armada you’d wish to avoid. You can also utilize radar and IR finder for scanning the skies for different kinds of threats, which you must assess using the general knowledge of aerial warfare. The unidentified boogie that closes down on your position with the velocity of 1000 km/h is probably a tactical missile, not the enemy frigate. Using the radar in active mode paints the big fat target on your back, and it’s generally advisable only in emergencies. The concept of “manually sniffing” the environment and wavelengths and plotting the movement of your fleet or its parts is brilliant but requires a lot of practice and patience. All your efforts are rewarded when you skillfully avoid the mortal danger or capture big juicy transporter for the gold you’ll always need. That fuel is expensive, repairs and replacements cost even more. 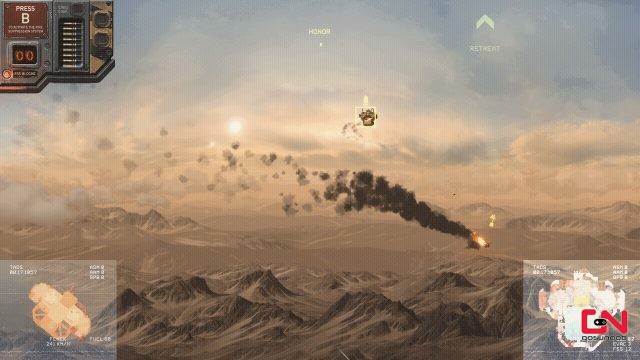 When confronting other ships, the game turns to action vaguely similar to the ancient 8-bit game Thrust, an inertia-based side scroller but with lot more explosions. The strength and weakness of every ship come painfully evident here as you will always fight alone against several vessels simultaneously. Like in the SIGINT aspect, some automatization is desperately needed here, but I doubt that it can be patched at this point. The same goes for landing your ships in the settlement docks, a manual operation that gets very old very fast. I’m an admiral. Why must I take over every officer in the damned CIC? 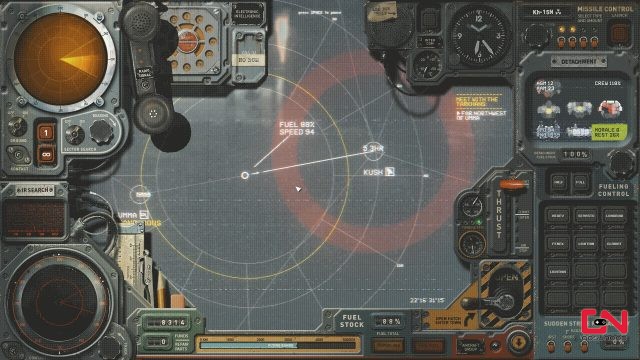 HighFleet requires a patient and invested player willing to learn and who is not afraid of quite a big challenge. You can easily get demoralized after repeatedly failing the campaign or persistently struggling to comprehend its more advanced concepts. But if you can overcome those challenges, I pretty much guarantee that you will fall in love with the game. Eventually. There is nothing else remotely like HighFleet, so the novelty factor alone can carry you until you acclimatize and embrace it.