The third and final part of the rebooted Hitman franchise is probably the best Hitman game of them all, both new and old. It deserves that accolade not because of the gameplay mechanics and ideas, which are virtually unchanged from the previous two games; the real reason for the number one spot is the fantastic mission design, which incorporates the singular best level in the entire series, Dartmoor. Murder mystery in Agatha Christie’s style placed inside the classic assassination mission is the pinnacle of everything that IO interactive had done so far. More of that later. 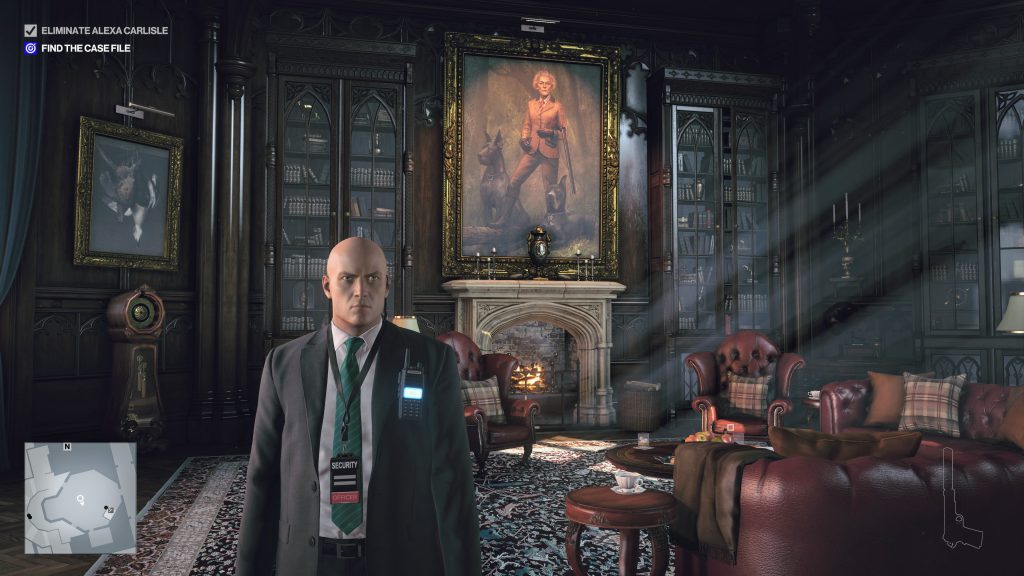 Hitman III offers the conclusion for the World of Assassination plotline of the previous two games. The overall story is full of watered-down Robert Ludlum tropes but is quite functional in the context of the game. If you are catching up with that international thriller tale just now, on its third installment, you’ll get the quick recap of previous events that should be enough to grasp who’s who in the world of Hitman and friends. Pseudo-Illuminati, shadow governments, hidden crimes of high society, villains with villainy voices, you’ll get all of that and more here. 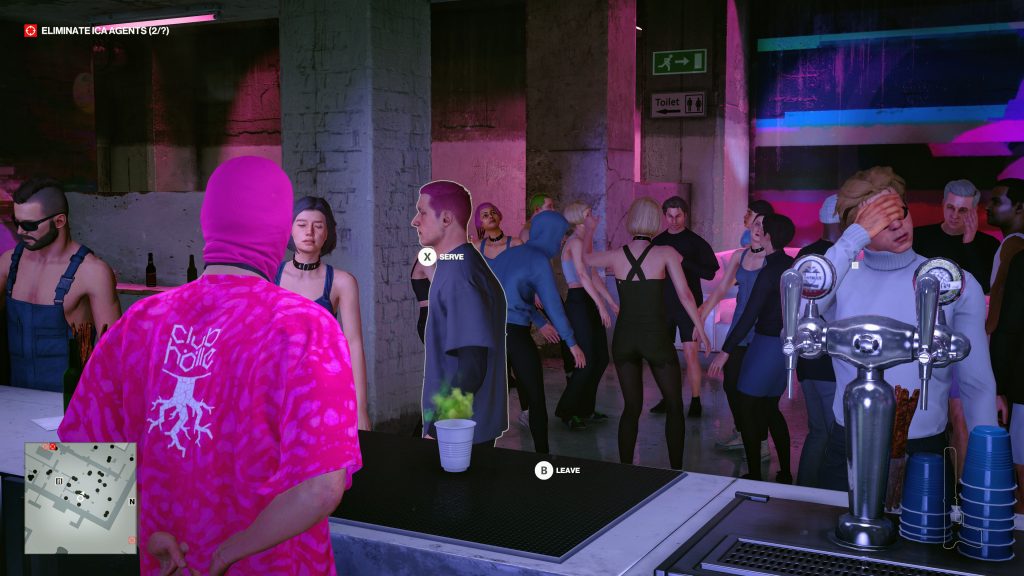 Somewhat smaller in scope than its latest two predecessors, Hitman III offers six main missions, omitting the co-op sniper assassin mode from the previous game, but more than compensates for it with the quality of the content. As before, each mission is a richly detailed assassination playground designed to be replayed dozen times or more. Thorough exploration and eavesdropping unlock new avenues of approach. Each successful pass through each mission raises the location mastery that offers additional options for subsequent runs, such as alternate starting points, stashes for smuggled items inside the mission zone, and more. You can quickly lose yourself for hours, drawing creative infiltration plans, executing them, and improvising on the fly, chasing that elusive perfect score. 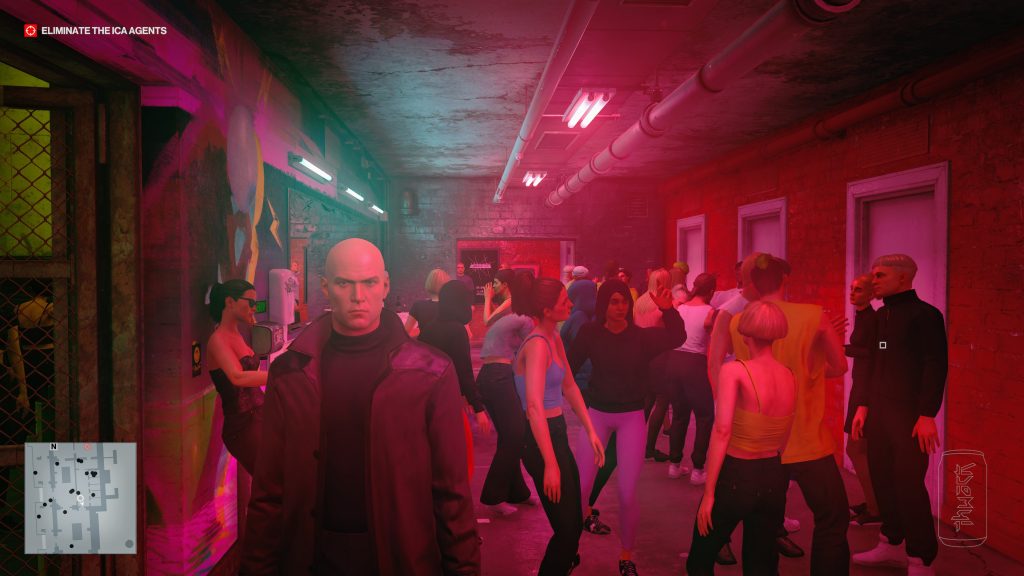 Like I said at the beginning, mission design makes this installment the best one ever. The second mission, in which you have to kill Alexa Carlisle, high profile matriarch of an ancient family and one of the leaders of the Providence (Hitman’s Illuminati) inside her ancestral home in the English moors, is the prime example of that quality. The massive, Edwardian family estate is under lockdown, bristling with several layers of armed guards – apart from waiting for you to show up, the family has one more major crisis on their hands. Alexa’s brother Zachary has been killed, and a private investigator from London is summoned to conduct the discreet investigation. If you manage to intercept that bloke and take his clothes, you could assume his identity and try to get to the bottom of this yourself. You get the opportunity to examine the evidence, interview members of the family, inquire about their alibis and motives, and manipulate everyone in many exciting ways, setting up for the kill of your mark while she was unguarded. All of that is purely optional – on my first pass, I used the massive candelabra in one of the rooms, detaching it from the ceiling with a precise shot from the silenced pistol when Alexa had a brief discussion underneath it. Splatt. I decided to savor the murder mystery on my second playthrough. 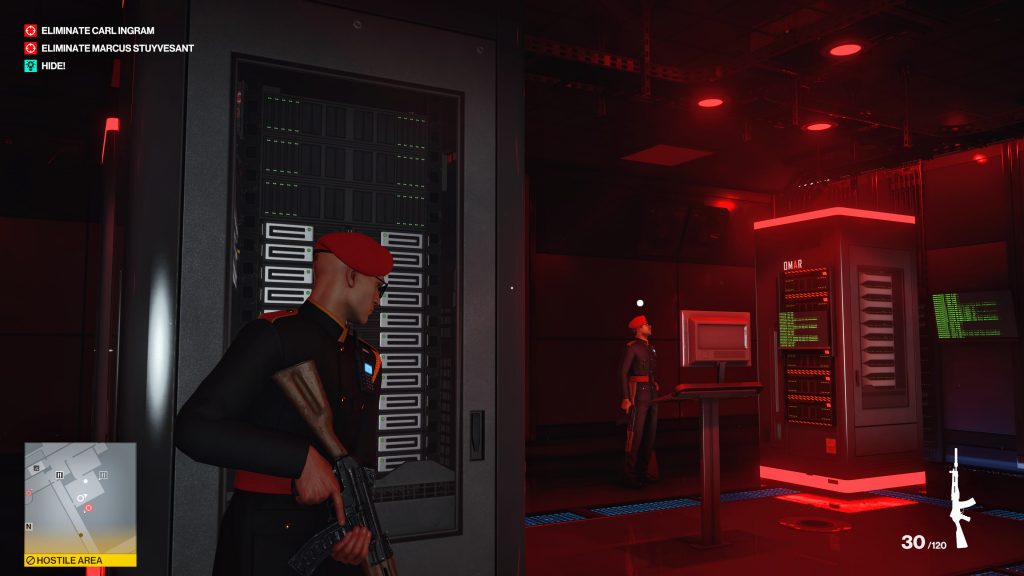 The rest of the missions are also exemplars of the smart design philosophy. Berlin night club sets rules upside down as you are going in blind, having no idea how many assassins are after you. You’ll need to secure entry and scout the area carefully, finding them one by one and eliminating them in an overcrowded environment. Then, there is a mission on the train blazing thru Carpathian mountains, a linear level in which combat avoidance is an arduous task – if you manage to stay hidden until the end, you could probably make money as a cat burglar in the real world. 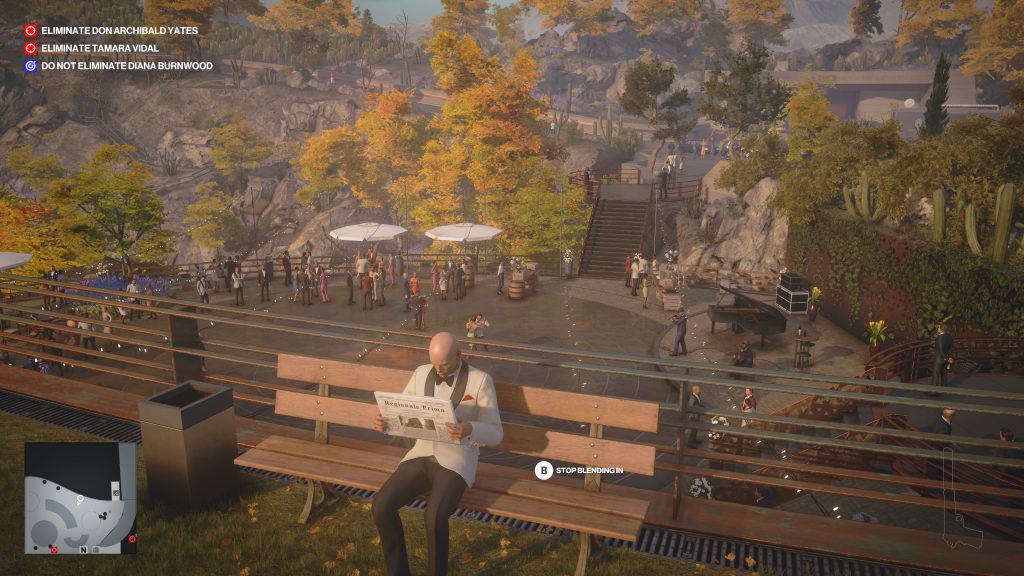 There are a couple of things that could be improved. The game engine’s behavioral part could use a substantial overhaul because people tend to panic more intensely and chaotically when witnessing a murder. That particular problem is not visible all the time, but I became aware of it during the “Mendoza” mission, where I needed to kill two ultra high profile targets during the posh retirement party for one of them on the grounds of a countryside villa. I killed both targets from the rooftop with the sniper rifle, which resulted in a short kerfuffle among nearest guests, and pretty soon, everything was normal again with wine-sipping, mingling, and upper-class casual gossip. Hundreds of people, scattered in huge open space, witnessed the two deadly headshots, and none of them ran for the safety of their car. None even fell on the ground or hid behind the open bar. Barely anyone screamed. And soon, they all forgot about that. 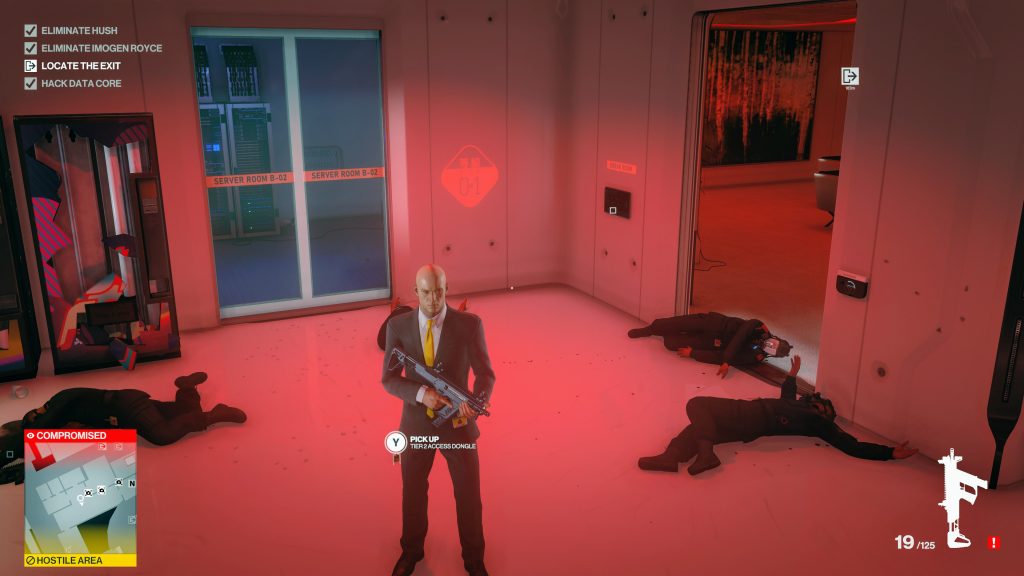 Hitman III is an assassination simulator, not a jump&run platform game where make-believe is optional and fluid. I want to see sheer bloody panic when I opt for the high-risk action like the JFK-esque rooftop shoot. I want to weigh my options carefully, dreading causing a panicked stampede and resulting manhunt, but eventually going for it because it is quickest. I want a realistic, singular chance for that loudest of all options, with the entire security force converging on my location after I take it. I want higher stakes. I want believable make-believe, not this, whatever this is. The good news is that the crowds’ behavioral AI is practically the only thing that needs improving in the next Hitman game. I assume there will be next as Agent 47 practically retires all the time, never really retiring after all.