Almost a year and a half in the new console generation life cycle, Sony is confidently leading the platform exclusives race. Microsoft could only dream about powerful single-player Uniques like Horizon Forbidden West. The situation will probably change in the future when Bethesda and others spawn something worthwhile. Still, for now, PlayStation is the thing to have or to chase if you don’t.

Horizon Forbidden West is a direct sequel to Horizon Zero Dawn (2017), a post-apocalyptic, open-world game with a remarkable Sci-fi story full of fascinating ideas. Continuation of a tight narrative means that you’ll pretty much need the full context. There is no point in playing part 2 if you don’t know Zero Dawn intimately. Once again, the story is paramount here, much more than in, say, some Ubisoft open-world game with the less nuanced plotline. So, let us assume that your familiarity with the Horizon lore is solid.

The point of no return 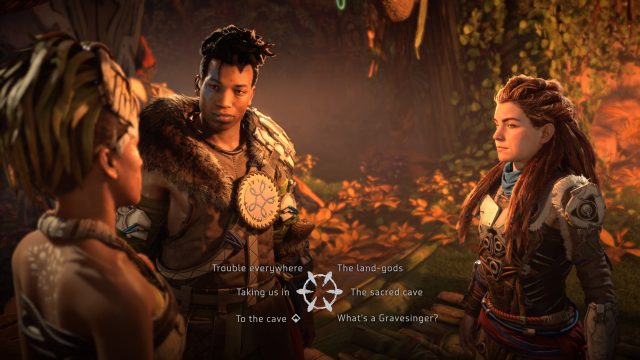 After the successful defense of Meridian, Sylens betrayed Aloy and stole the Hades, rogue AI that planned to reset the biosphere. The immediate threat was over, but the environment is still in steady decline, slowly approaching the point of no return. The solution? Finding the backup unit of Gaia AI and kickstarting the process of environmental renewal. Forbidden West begins with our heroine prowling the ancient ruins for it, but the trail is running cold.

Forbidden West, the vast area comprising parts of Nevada and California from the modern continental US, is the next logical step. It is the home of Tenakth, a collection of warrior tribes with troubled history with Carja. Aloy will need to come to terms with those people and form an alliance that will enable her to answer the ultimate threat looming over everything. It is almost impossible to further discuss the story without resorting to significant spoilers, so I better stop here.

All dressed up for San Francisco 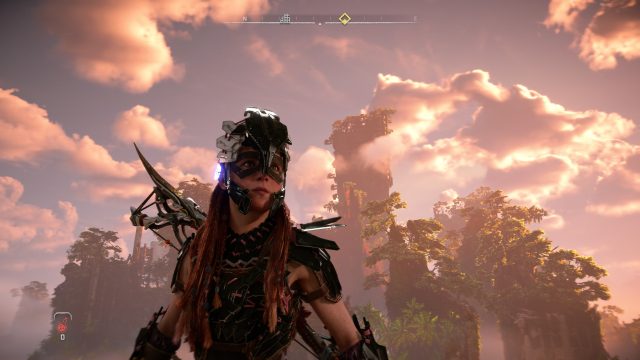 Congressional Act 1344/Z3 stipulates that every modern post-apocalyptic game must include ruins of Las Vegas in some shape or form, and Forbidden West follows the law to the letter. As a bonus, we get to experience ruined and partially submerged San Francisco. The massive game world is filled with things to do, landmarks to visit, tribal villages to assist, and mechanical monsters to hunt. The progression system starts from zero for both Aloy’s gear and abilities, with a pretty flimsy, inconsistent explanation of why. On the other hand, the progression is more detailed in almost every way. The class trees, for example, are packed with active abilities and passive augments that are too numerous to mention. Parts of it feel like pure bloat, and you won’t need to use the majority of it.

Apart from one or two boss fights, Horizon Forbidden West feels way too easy most of the time. This is especially evident while solving simple environmental puzzles in ruins. Aloy will constantly advise you how to proceed, giving you detailed hints that make experimenting meaningless. The torrent of forced guidance never stops, not even during fights with the machines. Hit that thing with acid/fire/plasma! God forbid if I would need to scan the foe or consult the database. Yes, I know that accessibility is the new Holy Grail, but devs really didn’t have to go all the way in appeasing everyone. 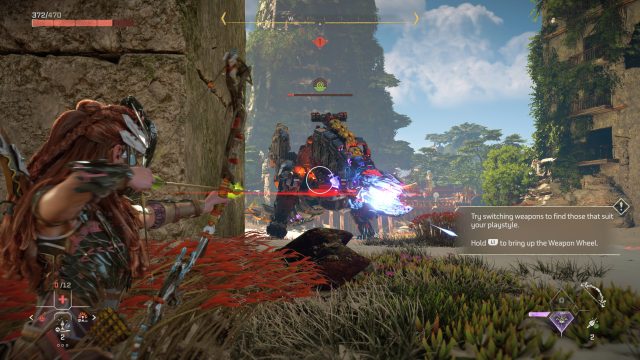 Your combat arsenal is greatly expanded with some new and pretty deadly projectile weapons. I liked the throwing spears with exploding tips as they are useful for peeling the armor from tougher opponents. Great non-combat addition is the glider, repurposed energy shield that enables Aloy to safely float down from any height. Among other things, it simplifies exploration.

From a technical standpoint, Horizon Forbidden West is truly a masterpiece. The game was released for both PS5 and PS4, but the proper way to experience it is, of course, PlayStation 5. Compared to Zero Dawn I had played on PS4 Pro, Forbidden West looks much more detailed in every respect. Morphology of the terrain is greatly expanded with predominant verticality and the ability to climb lots of surfaces. The climbing is not very consistent, though. Some rock surfaces, for example, arent climbable despite looking exactly the same as the one you climbed a minute ago. 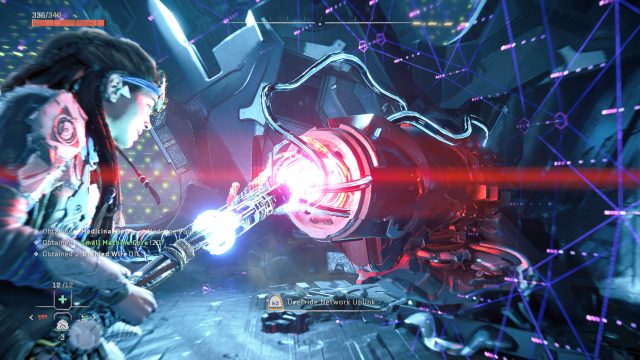 The game is absolutely massive in scope. It took me 35 hours to finish the story while tackling a limited number of side quests, errands, and contracts. I guess you could spend more than twice as much if you decide to clear the entire map and solve every tribal problem under the sun. My final completion score was a meager 34%, so there is definitely much more meat here that I was willing to consume right now. Not because something was wrong with it, mind you. I plan to revisit the game once I claw through my massive February log, which includes Elden Ring, potentially the greatest time vampire in Q1. Wish me luck.

The game is full of satisfying revelations to almost all the crucial questions from Horizon Zero Dawn, and for that, I applaud it. The story’s conclusion has the same vibe as in the previous game, making the game an interregnum for the things to come. Yes, we get almost all the answers and a semi-happy end, but the stage is set for even more apocalyptic conflict in the future. If the objective was to leave the player hungry for new Horizons, Forbidden West successfully did its job.