It Takes Two is probably the best, most engaging, and innovative cooperative game in the whole vast universe. It sounds like juvenile hyperbole, but it’s most certainly just a mild understatement. Hazelight Studios had previously shaken-up the co-op gaming niche with A Way Out, a two-player game with a grim, adult theme, but their latest endeavor aims at a wider audience. It’s also much better in every respect. 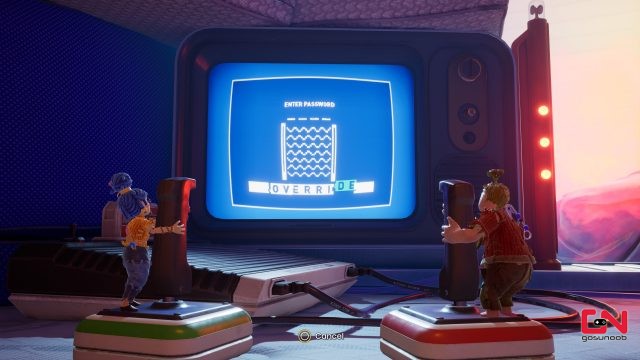 May and Cody are your typical estranged suburban couple on the brink of a divorce. Their preteen daughter, Rose, is obviously not delighted after „the talk“ (mommy and daddy both love you very much and that won’t change…), and like young Max from the movie Liar, Liar, she accidentally appeals to the mischievous supernatural force to make things right again. Her tears fell on the dolls representing her parents, and with a little bit of outworldly ZING, May and Cody leave their bodies and transfer their conscious selves into wooden and clay action figures.

What follows is a fantastic, interactive version of Honey, I Shrunk the Kids, but with the parents instead of kids and soul swap in the place of the shrink ray. May and Cody must learn to work together and trust each other again if they wish to return to their comatose, numb bodies that lie awkwardly in the house. It’s not going to be easy, as their suburban yard is transformed into a magical place full of obstacles and “learning experiences” for them to overcome in a tandem. 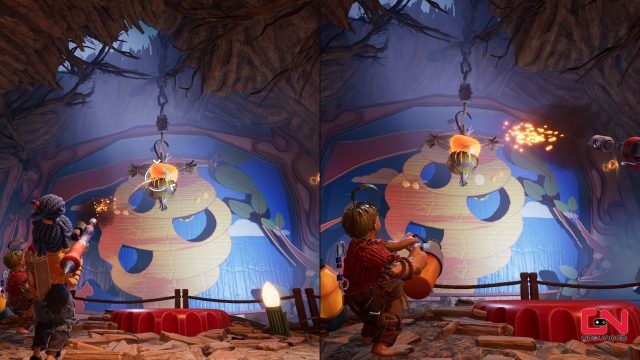 It Takes Two is a cooperative game designed for two people, either on a split-screen or online. Every section of the game requires close cooperation and coordination between players, and it’s just not possible to play solo unless you somehow grow extra pair of hands. At its core, this is an action-puzzle adventure with wildly diverse levels and ever-changing dynamics. There is a surprise around every corner, something new on every screen, and many radical gameplay twists and turns await you to experience them in each chapter.

It Takes Two never stops or even slows down in being innovative and radically different than It Takes Two from 30 minutes before. Most of the time, it operates like a typical 3rd person action game, but the perspective shifts when a new element or challenge is introduced. It’s like Super Mario Odyssey with a lot more personality found in relatable, real-world banter and spousal small talk. 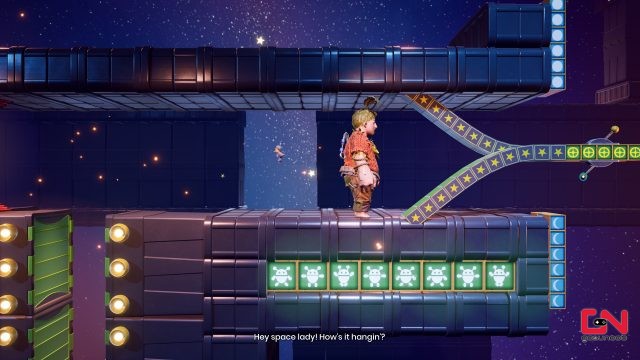 Gameplay elements are diverse in a way it defies traditional labeling – you just can’t put a sticker on this game and file in under one definitive category. Some levels play like 2D platformers, one works like an isometric action RPG, there is even a section resembling Street Fighter where you battle a militant squirrel on top of the flying machine made of old boxer shorts. Most of the levels have unique gimmicks that demand tight cooperation – for example, in chapter 2, Cody gets the squirt gun that fires flammable sap, and May gets some sort of bazooka that launches lit matches. When fighting swarms of aggressive wasps, you will need to swiftly call out targets and take em out in unison by applying the sap and setting it on fire. „Sap it up then light it“ mechanics further expands into puzzles, where sap works like applicable weight, suitable for de-balancing see-saws and other simple contraptions. There is a lot of room for experimentation, but the solution to every problem is mostly singular – figuring it out is the tasty meat of the game. 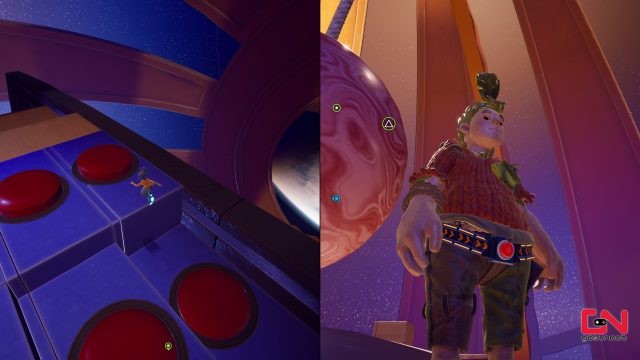 Boss fights are quite unforgettable. You will fight a lot of anthropomorphic foes like an evil vacuum cleaner, toolbox, or robot wasp with the delusional bumblebee inside, cooperating to bring the damned things down. There is an immense amount of personality and lightheartedness in this game – not only will it tax your brain and test your reflexes, but it will also put a big smile on your and your co-op partner’s faces.

Contrary to great many “cute” games, It Takes Two is not made with the intention of alienating children with the diabolic difficulty curve. You know, like pretty much every Crash Bandicoot game out there. I had played the game with my seven year old daughter, and we managed to plow thru it like the 7th Panzer division through the French countryside.

“Daddy, this is like a super cool movie we get to enjoy every day”, she said to me. “Without any repetition”, I might have added – after being pressganged to watch Moana and Frozen for days on end, a game like this, with its infinite variety, feels like a splash of Aloe Vera to the sunburned forehead. We dealt with the occasional “stucky” situations by swapping the roles as either May or Cody always has a clearly easier task in any particular section. I suppose that is also by design as if the game wasn’t clever enough already. This is an excellent game to bond with your kid over it or even your spouse if they are up to it. 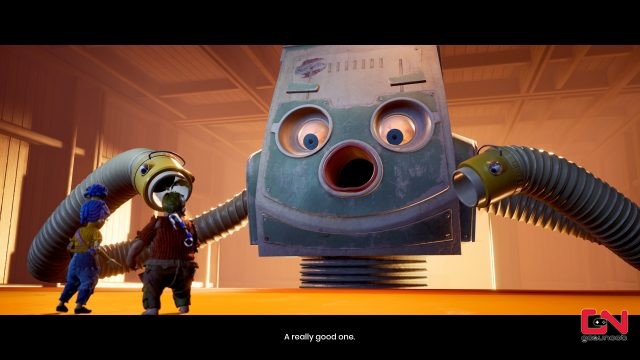 It is hard to think of the 2021 unfolding without It Takes Two is widely recognized as a strong GOTY candidate. Jumping the gun and declaring it right now would be a bit reckless, but the heart wants what it wants. I intimately wish that it sells like crazy so the developers could pump a sequel or three. I haven’t had this much co-op fun since Portal 2, and that fact alone speaks volumes.

It really is that good.