The latest Doom games went overboard with comically complicated lore that put the unnecessary spin on a legacy concept, perfect in its simplicity. Lone soldier vs. demonic horde in the hi-tech off-world environment did not need an extra layer of bonkers mysticism and pseudo-religious overtones piled on top of the base idea. It was distracting and unnecessary as both Doom (2016), and Doom Eternal (2020) would supremely rule through gameplay alone.

Jupiter Hell, a game with roots in DoomRL, little indie pearl later renamed DRL because Bethesda flashed the copyright claim, is the spiritual successor of that minimalistic elegance, albeit in a completely different form. This is an isometric, tactical roguelike game that embraces the original Doom ideals, offering the complete antithesis of its FPS formula. Funded via Kickstarter in 2016., Jupiter Hell was offered in early access in 2019, where it gestated for another two years. 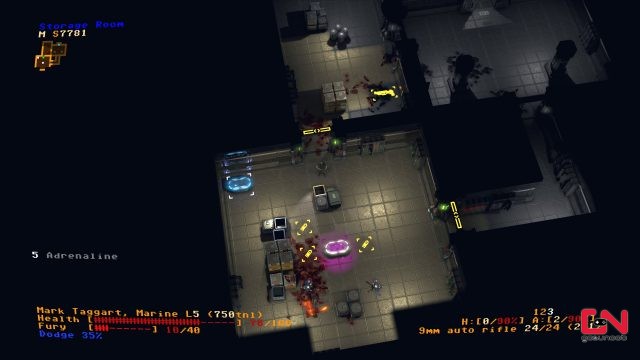 Returning from the uneventful patrol of the Jovian region, our brave soldier’s skiff gets fired upon approach the Calisto station, but he survives the crash landing and is now royally pissed off. The base is full of possessed security personnel and fiery imps that weren’t there this morning. With nothing but static on the radio, he must leg it in search of answers and a way out of there.

The first thing you’ll notice is effective CRT aesthetics that smoothly follows up the plot full of nineties DNA. The game simulates cathode-based display and shuns mouse as it instructs the player to either use keyboard or gamepad for navigation, both in menu and in-game. So far so 1992… The visuals are superb as the retro style used here is not envisioned as some cheap, low-poly clutch to misplaced nostalgia but a rich and beautiful approximation of the essence of late last century gaming. Jupiter Hell looks precisely like your rose-tinted memories from that era – it pleasantly deceives without showing you the wrinkles. 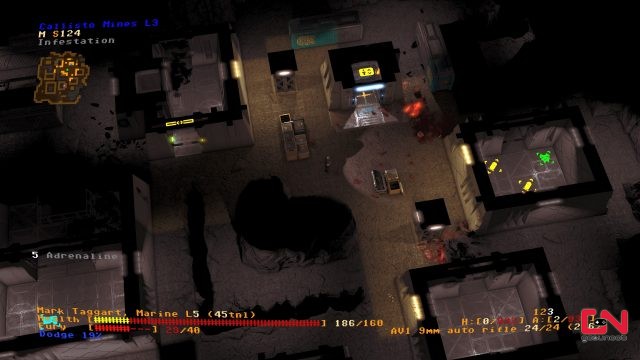 Gameplay, on the other hand, radically differs from its original inspiration. Jupiter Hell is a turn-based, tactical roguelike „shooter“ that trades the speed and ferocity of Doom for a systematic approach and a lot of unpredictability. You and your foes all move in the square matrix, shoot and act simultaneously, requiring you to maneuver and position yourself for minimum exposure and maximum effect. Cover plays a significant role in the survival of everyone on the screen, and fog of war limits your awareness to things you actually can see regarding the facing direction and lighting conditions. Targeting is automatic by default, but instead of the closest enemy, you can always manually prioritize the target, perhaps using the environment to your advantage – some levels are littered with fuel and chem barrels that can be used as expected. The best thing about the whole idea is that there is no rush. No matter how apocalyptic things look, you can always take your time and calmly decide on your next move. 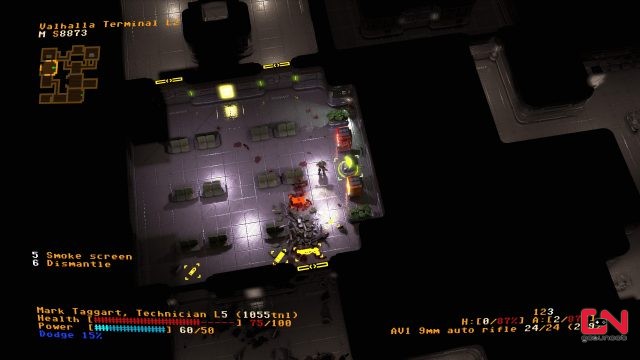 Levels are procedurally generated, and the same goes for enemy spawns and loot chest seeding, so the random number generator plays a significant role in your potential success. Sometimes, the game feels wholly unfair, as you get jumped from every direction, three steps from the ingress elevator, and gunned down before you had the chance to reach any cover. Some other time lady Fortuna will smile on you and grant you a rare chaingun at some early level, where even a lowly submachine gun could be considered a nice drop.

Apart from the classic Marine, you can also play as Scout or Engineer, but the differences between them are not that crucial. Marine can self-heal when accumulates enough adrenaline, Scout can turn invisible when he gathers similar amount of energy, and engineer can use that resource to lay the smokescreen. Each class also has a passive perk, such as auto-mapping each exit on every level for the Scout. Marine is probably the easiest choice for most people as his self-healing benefit feels more critical than the finesse gimmicks of the other two choices. Every class has shared, and unique talents, and leveling up allows you to develop your hero as you see fit. Playing as a marine, I prioritized the enemy positional tracking, investing my early points into SKILLED and three levels of BLOODHOUND. Being blind in the space station full of hungry demons is a bad, bad idea, and when I grasped that recon was more valuable than HP, my runs became more successful. 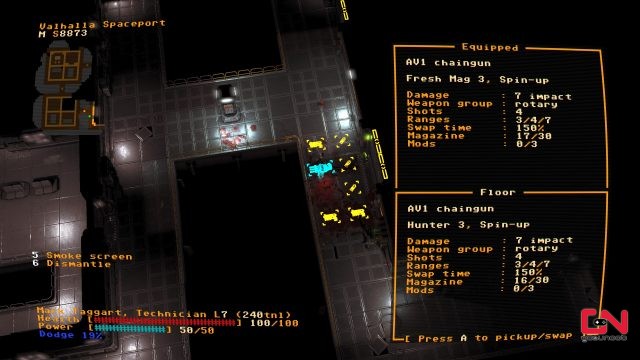 Sadly, all your hard work in that regard goes up in smoke when they kill you. Jupiter Hell is a proper roguelike without gradual grinding and incremental meta upgrades that make the game easier. Each attempt gives you a singular chance to complete the game – if you fail, you fail completely, carrying over only the immaterial experience of the previous run. This is hard but not unfair since you can set the game on easy and finish it without much effort, preventing the frustration associated with headbutting the armored bulkhead. If you set it on „medium“ or, God forbid, harder difficulty setting, expect a lot of pain, frustration, and cursing the RNG.

To be successful medium to long term, you need to learn to resist the lure of the arousing heavy metal tempo or turn off the music completely. A powerful metal score is constantly pulling you on the risky side, subconsciously leading you to play faster and take more stupid chances, which will ALWAYS end up in disaster. That kind of score is perfect for regular Doom, where it helps you reach that gory, violently kinetic zen full of ripping and tearing, but here it actively sabotages you, lighting the fire in your brain instead of helping it cool down. 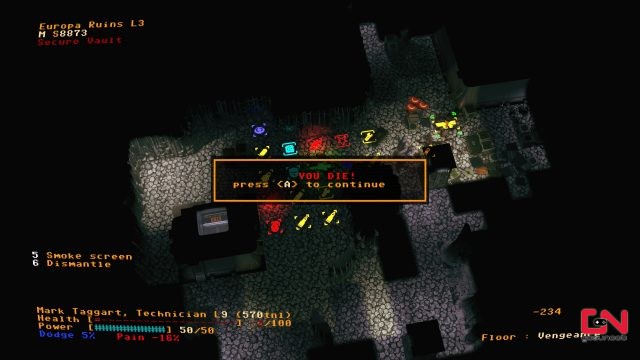 Jupiter Hell can be tough as nails and unforgiving AF, but for some people, it will be a major point of attraction. If you are tired of games that treat you like a baboon that needs pandering and constant hand-holding, you will wholeheartedly embrace the cold horror of this sweet little cult classic in the making.

NEXT POSTFortnite Superman Skin Release Date & How To Get