While the Mongol general from Conan the Barbarian (1982) strongly feels that crushing your enemies tops having a fleet horse and wind in your hair, those two things aren’t mutually exclusive. In Mount & Blade 2: Bannerlord, you can simultaneously indulge in both pleasures. For lamentation of their women, you’ll have to resort to imagination, but most other staples of the violent medieval world are simulated here.

Mount & Blade 2: Bannerlord is an impressive mix of open-world RPG and clan/kingdom simulator with a spectacular, third-person combat module where you can fight and command an army at the same time. The game benefited greatly from extended development and several years of early access. We previewed it in April 2020, and it already felt complete and (almost) ready for prime time. Meticulous folks from Taleworlds Entertainment nevertheless spent another year and a half fine-tuning everything. 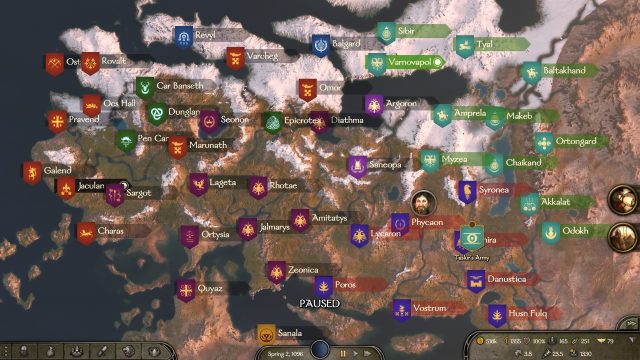 Whether you select story mode or sandbox, you can expect the same rags-to-riches experience. The fictional medieval kingdom of Calradia goes through something similar to Sengoku. The old empire fragmented, leaving remnants and successor states competing for supremacy. Penniless nobody at the beginning, you will slowly work towards enriching your insignificant clan, amassing fortune, retainers, and fiefs. Working for one or more local kings, you will do their bidding, earn their trust and wedge your behind close to the seat of power. You can even try to establish your own kingdom if you grow sufficiently powerful, brushing aside former allies and foes. The goal is the same in the story and sandbox mode, but the story offers some specific quests and a bit of literary flavor.

In the beginning, you will fight bandits, leading a dozen basic troops. But with each gang splattered over the meadows, you will grow more experienced and richer, enabling you to take on more complicated tasks. Soon, you will escort merchant convoys over the land, liberate entire villages from poachers and enroll in the mercenary service of the local lords. After a while, you’ll realize that it would be nice to have a castle on your own, but the route to fiefs is the total commitment to one of eight kingdoms. 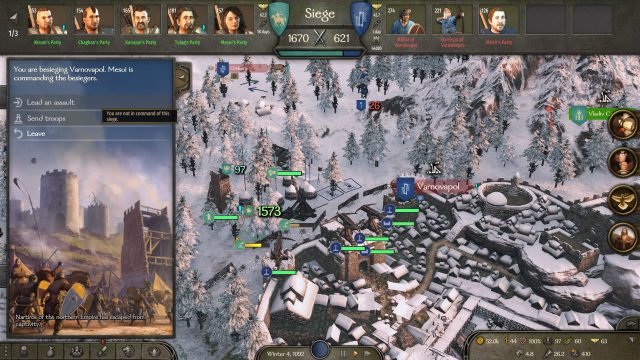 Those kingdoms differ in aesthetics, combat units, and bonuses but share the same ideology of opportunistic Conquest. Developers chose to totally omit religion from the game, so Viking-like Sturgians and pseudo-Mongolic Khuzait essentially operate on the same level. The game lacks flavor in this regard, sadly. The differences in units loosely follow general national archetypes, though. Khuzait, for example, has the widest variety of cavalry. Moreover, horses are much cheaper in their steppe villages, enabling you to upgrade your troops for less.

Commanding and upgrading your troops means ever-increasing costs. You can offset expenses by working your ass off and engaging in mercenary work all the time, but you can also dabble in the medieval economy. Depending on your clan tier, you can own a certain number of workshops in the cities, which provide steady income. You can also organize your own caravans, but the bulk of revenue, outside of combat, will come from taxation and shared tribute. For both of those, you need a kingdom, either your own or vassal status, in one of the eight successor states of old Calradia.

“See them Driven Before You” 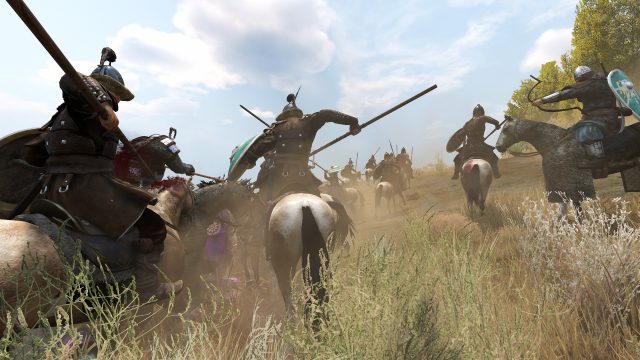 Management and logistics aside, you’ll primarily play Mount & Blade 2: Bannerlord for its meaty, kinetic combat. The game offers the best horseback fighting of any game we have ever experienced. You can almost feel the weight of impact when your armored horse hits the lined-up infantry. Melee combat is directional and precise, offering a broad selection of weapons. For beginners, we recommend playing safe and using a bow or crossbow as a starting weapon. Until you get better armor and/or shield, most foes can easily knock you down if you expose yourself. If you prefer to be reckless, you can effectively cheat by selecting the percentage of damage you receive in combat (in options).

With a few exceptions, like assaults on bandit strongholds, you can automate battles, sending your troops to fight in your stead. Manually leading the battle enables issuing tactical orders to your forces and overcoming a stronger enemy by employing clever faints, funnels into chokepoints, etc. But fighting in this game is so frequent that you will always try to pick an inferior enemy and start every engagement with charge. Unless, of course, you have thousands of hours of spare time and the patience of a benedictine monk. 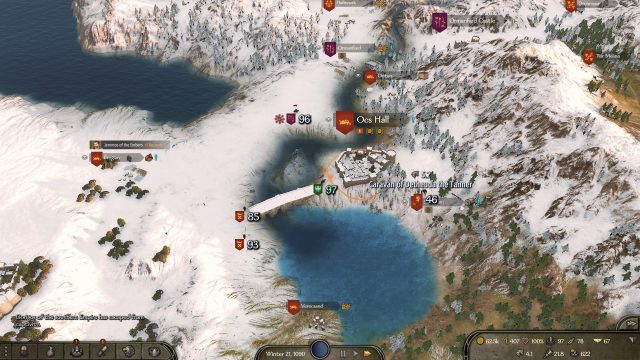 I hate the pre-fab nature of most repeatable quests. For example, escorting a merchant caravan always spawns a raider group on each journey’s leg. No good or nasty surprises, no quiet runs, just the inevitability of the bandit encounter. The same goes for most other quests involving combat. After literary hundreds of identical “wait for midnight and engage poachers in the village” assignments, I started to have flashbacks of WoW and its daily quests. All that shatters the illusion of a true sandbox where actions have cumulative consequences. You can spend days chasing bandits and rooting out their strongholds, but that won’t make the particular area any more secure for caravan-escorting purposes. Spawnable bandits will operate like clockwork, attacking the caravan roughly halfway to its next destination, always using precisely the same force composition.

On the other hand, Arena tournaments are all about surprises, as you get random weapons and opponents in each round. If you are lucky and get your favorite, you can quickly demolish the competition and get the (usually expensive) prize. Sometimes, the numbers will work strongly against you, giving you a short sword, no shield, and facing you with several mounted foes.

Conan in every Conquest 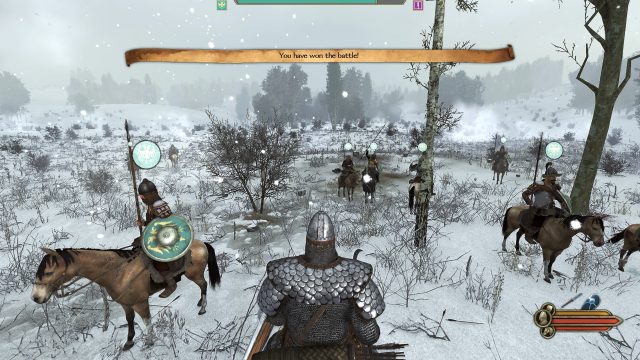 Once a slave, now a king of Aquilonia… Fascinated with Conan the Barbarian novels by Robert E. Howard, I wanted different things as a teenager. My peers wished for BMX bikes while I imagined myself on an armored horse. Mount & Blade 2: Bannerlord provides the interactive vessel to that power fantasy. If you let it run wild, the game will effectively destroy your free time, grabbing you in the iron clutches of addiction. It will become even more engaging as user-created mods pop up. I would gladly sink hundred more hours into an authentic Euro-Asian map with historically accurate kingdoms and heroes. Just thinking about it makes me hor… horrendously enthusiastic.