In the Cantonese dialect, “Sifu “has the combined meaning of teacher, master, and father in the context of martial arts training. The most prominent Sifu we all knew was venerable Pai Mei from Kill Bill movies. He was strict, uncompromising, and ruthless, but he rewarded the persistence and self-sacrifice of his pupils. He taught Bride his signature move, Five Point Palm Exploding Heart Technique, only after she proved that she wouldn’t quit, no matter what.

If you often wondered about your potential breaking point in kung-fu schooling, Sifu is here to help you find that intimate data point. This majestic, uncompromising game is like Pai Mei on steroid-laced fish heads. It will chew you and spit you until you prove that you can handle the immense challenge that represents the core of its experience. Sifu taxed me more than any game in recent memory; it repeatedly beat the shit out of me, but I kept going back for more. And more. Until my muscle memory had developed its own muscle memory.

On the shoulders of giants 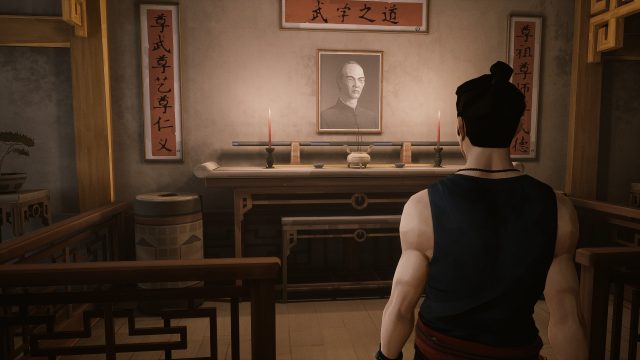 Sifu is a martial arts rogue-lite action game with meta progression and a unique way of penalizing failure. Its narrative draws inspiration from the golden age of Hong-kong kung-fu movies with Jackie Chan, Jet Li, and, of course, Bruce Lee. The story of betrayal and vengeance is a classic one. It stars the young survivor of the kung-fu school massacre, whose father was murdered some years ago by a group of exiled students. His dad wasn’t just any kung-fu master – he belonged to the ancient order that kept the secrets of life itself, coveted by his rogue pupils. The youngster had his throat slashed after the old Sifu fell but survived due to the magic medallion in his possession.

That medallion will be your primary tool in exerting the terrible vengeance on the villains. It will resurrect you after the death in battle, but the price for this limited immortality will be steep. When you die, you’ll age for a few years, and after a certain number of deaths, the magic will be spent, and death will become permanent. Game over. You’ll begin your quest as the eager, twenty years old lad or girl, equipped with limited combat techniques and combos. The only thing differentiating you from the hundreds of foes you’ll need to dispatch is your emerging skill and determination. Like them, you are just another human whose skull breaks quite easily. 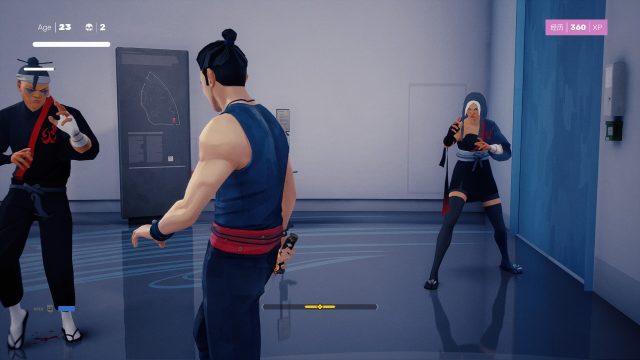 That vulnerability is the crux of the challenge imposed by Sifu. Even the weakest enemies can swiftly end you if they surround you and start poking you from different angles. Elite opponents, mini and stage bosses can ruin you much more swiftly if you disregard the basic self-preservation techniques such as blocking and dodging. You will need to master those before all else, both in combat and between the stages, training with your trusty makiwara.

The game will make you learn through failure, and that basic concept will stay with you until the end. Combo moves and techniques cost experience points, and you can unlock those for the current game only or permanently if you pay five times the required points price. There are very few passive boons in Sifu. Most of those are temporary, unlocked for the current run only by reaching the specific idols at every level. There are simply no alternatives to getting good. Levels have plenty of unlockable shortcuts, but the premise of hard learning will be irrefutable constant. 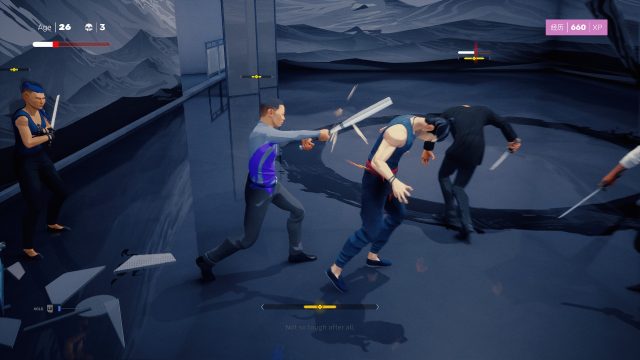 Practicing the combos and precise timings is a must, but combat positioning and weapon management are equally important. Enemies will always try to surround you, and you must always try to prevent crowding with you in the middle. Baseball bats, machetes, or even broom handles can help you keep up with the onslaught. Still, all those weapons break after a while, facilitating tactical use against most challenging foes. Makeshift weapons, such as bottles and bricks, are single-use only, but they can briefly stun an opponent, giving you precious seconds to dispose of it.

You can unlock some combos only when you reach a certain age threshold, so there is an incentive to keep going, even if you are certain that you won’t complete the current stage. Every failed run can potentially bring you closer to the ultimate goal by virtue of practice and unlocks.

The game consists of five separate stages that serve as checkpoints. If you fail at any time, you can start again from any unlocked location, using a save point from the best run you had managed to complete. In the game’s terms, best means your youngest “self,” as the reached age doesn’t reset in the single run. That means grinding, of course. You will gradually unlock new stages by the skin of your teeth, entering a new locale as an old kung-fu master with a small number of second chances left. When you unlock new moves and build your confidence a bit more, you’ll return to previous stages and try to achieve a “better checkpoint,” so to speak. 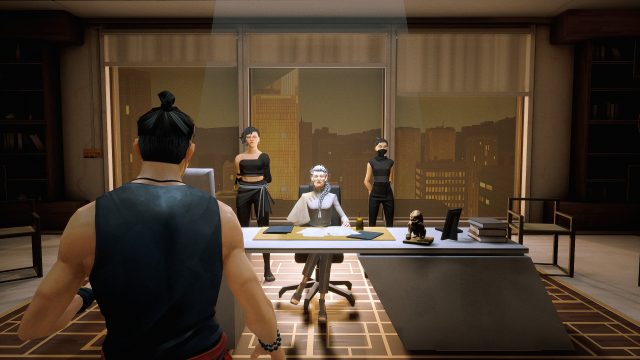 That journey will probably last more than a dozen hours, or even twice or thrice if you are clumsy. A very likely scenario for the average player is violent ragequit, as the challenge can quickly become unbearable. I had a couple of near-breakdowns; I had contemplated quitting, but only after using tiger’s claw on the bloody gamepad and crane’s beak on the $@#$ monitor. Fortunately, the publisher, realizing that very few journalists have Taoist patience and the mental stamina of Shaolin monks, provided us with the save game that unlocked everything. I can honestly say that I wouldn’t have had what it takes to reach and beat the last boss.

The impeccable visual style, superb combat mechanics, a unique form of meta progression on one, and monstrous difficulty on the other side make Sifu a beautiful but hard cookie to chew. This could be a dream game for any player looking for a serious challenge but a potential nightmare for the casual audience. Yin is much stronger than the Yang, requiring the player’s transformation into the balancing factor. Most people aren’t ready for the enormity of that effort.

Free copy of this game was provided by Epic Games for review purposes.
Review platform: PC
Developed by: Sloclap
Published by: Sloclap