Sniper Elite games have evolved pretty neatly since the series’ inception in 2005. The most significant upgrade came with Sniper Elite 4 (2017), turning the game into a proper sandbox. Sniper Elite 5 continues to ride the progressive wave, offering a high degree of tactical freedom and flexibility, adding weapons customization and multiplayer to the formula. The narrative, however, has been almost unchanged since the early days. Our hero, Karl Fairburne, still chases Nazi Wunderwaffe on the Western front, hopelessly stuck inside the 1943-1945 bubble. Charismatic as a walnut rifle stock and one-dimensional, Karl had remained a tight-lipped placeholder for the ballistic mayhem. It didn’t have to be this way. Disregarding the systemic difference of the games, recall how far B.J. Blazkowicz had come, character-wise, in a similar time frame. 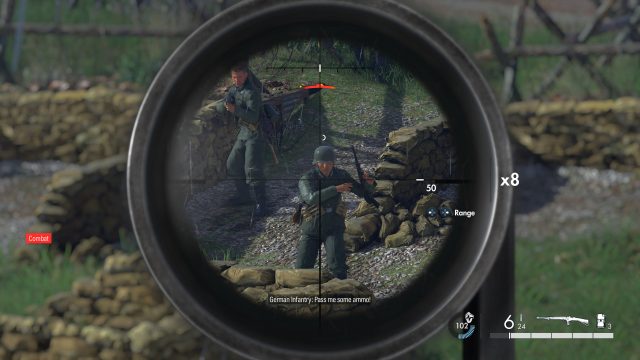 In Sniper Elite 5, Karl deals with project Kraken, a top-secret Nazi plan for turning the tide of the war. Karl will chase Krakenites across France, throwing a wrench and a lot of bullets in the cogs of their machine. Once more, he has a gang of helpers who only help with the exposition during the cutscenes. He was always a lone wolf in the field, and that hasn’t changed.

The single-player campaign consists of nine missions stuffed with multiple objectives. Some of those are optional, designed to maximize the usage of real estate in every mission. The best example of slight content copy/pasting is AA guns, conveniently scattered between story objectives in at least three missions. Sabotaging those with satchel charges is the optional objective that provides extra XP and more stars in the final mission tally. I don’t know… The high concentration of AA assets in Normandy ’44 is probably historically accurate, but it’s nevertheless lazy to repeatedly include it as a side objective.

Farming XP can provide significant motivation for completing everything each mission offers. Unlocking the talents in three different trees enhances your survivability, loadout potential, and tactical flexibility. If you are persistent, you should comfortably get everything by the end of the campaign. 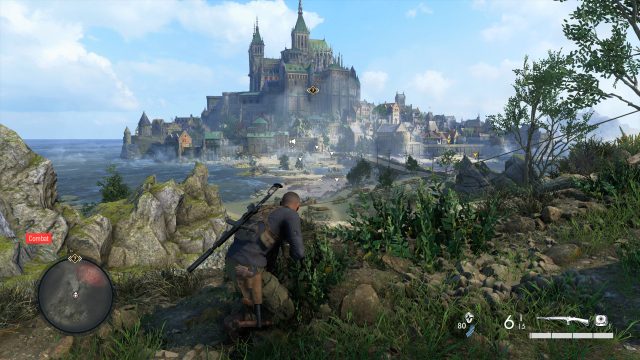 As in Sniper Elite 4, Karl has a significant but not absolute degree of freedom. Every level is a complex, multi-layered sandbox suitable for different approaches. You can go quiet if you are patient, crawling around and slowly grinding ze Germans. A loud approach is also fine, as long as you remain on the move. The necessity for tactical displacing is implemented pretty realistically. If you try to camp in one place, a stream of enemy reinforcements will make your life quite difficult. Sometimes, those spawns will be ridiculous in volume, with soldiers almost materializing from thin air around you. You can go almost everywhere, as long as it doesn’t involve crossing the bocage or even tiny roadside bushes. The artificial limitations are annoying – you can’t, for example, climb every countryside hill you come across unless there is some sort of road leading on top of it. Project IGI (2000) offers much more freedom and flexibility in navigating the landscape than Sniper Elite 5. 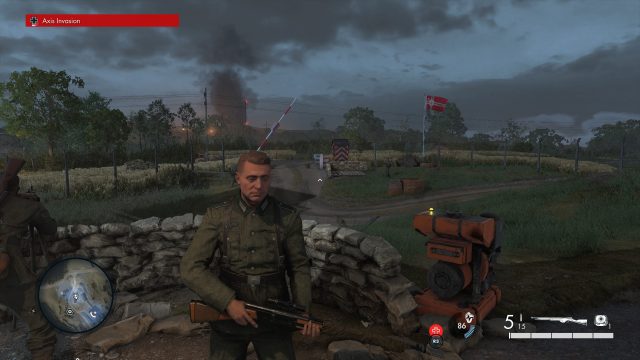 An entirely new but optional element introduced in Sniper Elite 5 is Axis invasions. They work similarly to player invasions in Soulsborne games, with one player intruding on your game, trying to kill you. Invading players can move freely between Germans and order nearby soldiers to pay extra attention to their surroundings. You and the invader can use phones scattered on the map to pinpoint each other’s current location. Invaders have one more advantage – they can listen to the commotion and gunfire and thus deduce your whereabouts and see you on the map if you are currently visible to any soldiers. Axis invasions are enormous fun if you like that sort of thing. Having a determined, patient opponent sometimes feel like starring in one of the famous sniper duels from Enemy at the Gates movie. Helmet decoys, camping, and unnatural quiet where you can almost feel Ed Harris watching you through the scope. If you are not a fan of added tension, you can toggle invasions off. Or you can play in co-op, reducing the difficulty (and stress) to a significant degree.

Weapon customization is another great addendum to the game. There’s at least one hidden workbench on every level that unlocks different weapon parts. The flexibility in fine-tuning the weapons is almost absolute, giving you total control in optimizing the tools according to your preferred playstyle. Every firearm has a different default value in the noise it makes – fiddling around with that can produce real game-changing hardware. 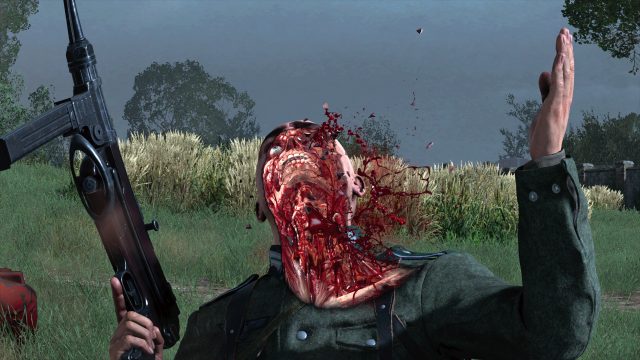 Slow-motion, X-ray renditions of sniper shots were always the signature element of Sniper Elite games. Following the ballistic trajectory of a rifle bullet, watching its penetration and the havoc it wreaks on a victim’s body is a gruesome pleasure for some players. Personally, I always found those scenes a bit over the top. Sure, I might extract a sliver of grim satisfaction from blowing the intestines of evil Waffen SS hauptsturmführer, but I cannot maintain the same level of hate for every lowly private out there.

LARP mode on! Or perhaps a reality check? How many of those soldiers are poor peasant schmucks from Westfalia, pressganged into Wehrmacht in 1944? Struggling to survive the war, looking for any opportunity to surrender to the Allies, voted for social democrats in every election… They aren’t Nazis, and I can’t cheer like a mad butcher while my bullet penetrates their skull in slow motion. Yes, captain Miller from Saving Private Ryan famously remarked that “our objective is to win the war,” but if I need to clear the game of every low schütze to do that, I prefer to keep it clean and civil. So, if anyone from Rebellion reads this, I would propose including “SS X-ray kills only” besides the option to turn x-ray kills on and off.

War. War never changes. But it should 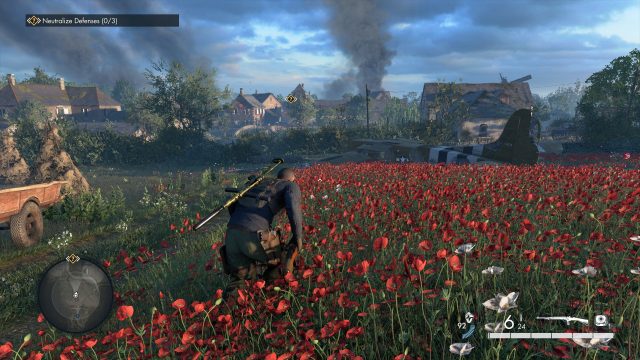 On the one hand, Sniper Elite 5 is the best game in the series. Mechanically perfect, loaded with novel (for the series) concepts such as player invasions, cooperative gameplay, and weapon customization. On the other, it’s burdened with a significant degree of narrative fatigue. How many more Western front WWII games can you endure before a total burnout? I know that familiarity sells and that the average audience doesn’t care for more exotic battlefields, but for once, I wish someone would look after us connoisseurs. Give us Courland peninsula, Warsaw uprising, or some attractive Balkans horror such as operation Rösselsprung. Google those, start petitions, etc.