Paul Verhoeven’s big-screen adaptation of Starship Troopers, a famous Sci-Fi novel by Robert Heinlein, has left a deep footprint in the late XX century movie pantheon. It was, in fact, so well-put in every respect that it single-handily ruined any subsequent attempt at franchise proliferation. It had set the bar impossibly high for any follow-up piece of content. Even the mid-budget TV series, produced by Verhoeven himself, tanked after a single season.

What about games? In 2000 we had Starship Troopers: Terran Ascendancy, a real-time tactical game with persistent unit progression. It was pretty modern for its time and good-looking but failed to make significant traction. Today, sadly, almost no one remembers it. A similar fate befell Starship Troopers (2005), a first-person shooter, but that one cratered because it was crap. And that was it, gaming-wise, for Starship Troopers for a long time. 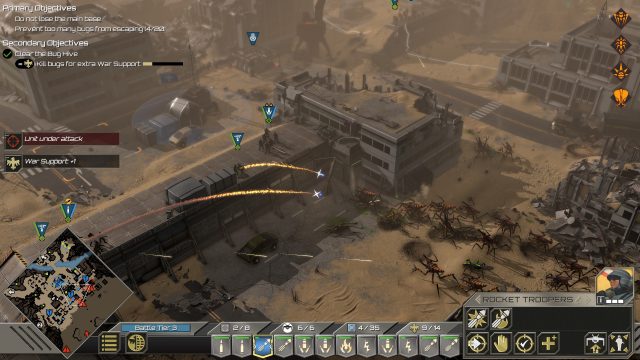 Starship Troopers: Terran Command (2022) won’t kickstart the great revival of all things Starship Troopers, but it could provide a bit of quality tactical fun for the fans. The game is a classic RTS in most aspects; it uses Verhoeven’s movie aesthetics and carries the same vibe of caricatural critique of militarism. It solely consists of a Federation single-player campaign. There’s no bug campaign, no skirmish, no multiplayer, and no scenario editor to fiddle with after finishing the story missions. The content is scarce but solid, and the game is relatively cheap, so I guess those factors compensate for each other.

Terran Command is set on Kwalasha, a resource-rich colony suffering from a sudden infestation. The bugs, led by ubiquitous brain bug, correctly assumed that the planet is vital for the Federation war effort, so they aren’t sparing any chitin trying to devour its cities, factories, and workforce. It’s up to Mobile Infantry to dislodge them from the exterior and interior of the planet. After a brief tutorial mission on Klendathu, campaign proper kicks in, and off you go killing bugs.

I’m From Buenos Aires, And I Say Kill Them All! 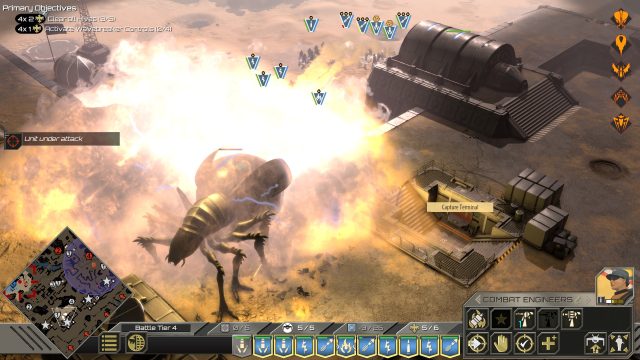 Through nineteen missions, your ever-increasing pool of units will deal with the bug threat. You won’t need to worry about logistics, mining, or harvesting. Units are expendable and infinitely requestable from the fleet in Kwalasha’s orbit. There is, of course, a cap on how many you can have deployed at any given moment. That limit can be increased in several ways, usually by capturing the ammo crates and radio towers on the map. Units earn XP in combat, eventually unlocking one of two special attacks, but that doesn’t carry over in the next mission. Twenty-two years ago, Starship Troopers: Terran Ascendancy HAD meta progression, but this one doesn’t.

The campaign’s first half is easy enough to lull you into a false sense of conformity. The missions are simple, clean operations, bugs are persistent but squishy, and everything feels dandy and smooth. You are gradually introduced to different mobile infantry units, learning about armor-penetrating weapons, rockets, flamers, portable turrets, and various bugs. The game also teaches you the value of proper combat positioning. Since most units can’t fire through each other, optimizing their placement to form an efficient kill zone is paramount. Or so the command says. You’ll be able to complete the first ten missions ignoring all that good advice. 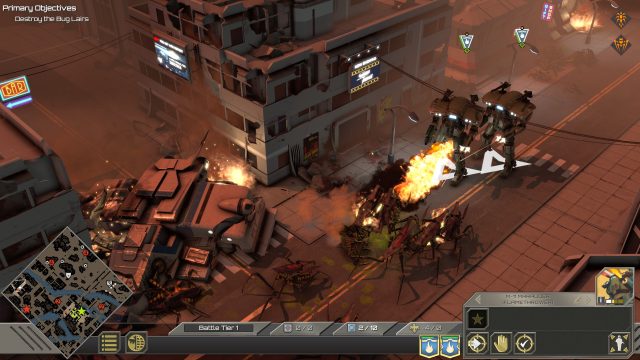 Around the midpoint, the campaign suddenly stops being a vacation on Zegema beach. All the rules you could have safely disregarded until now need to be observed as the enemy grows in number and armor. Normal, relatively squishy warrior bugs are no longer a dominant combat element as more and more tiger-striped, armored bugs start to show up. And tankers, plasma launching bugs, Scorpions, and other crawling horrors. Suddenly you absolutely need to start paying close attention to everything. Mission fourteen, The Federatsiyagrad, will be the ultimate test of your abilities. I don’t wish to spoil anything, but be prepared to struggle for a while.

Your expanded arsenal will help with the challenge. Besides regular infantry, there are combat engineers, EM troops, MK2 troopers… Near the end of the campaign, you’ll be given access to Marauder mechs and even combat exoskeleton troopers you might remember from the novel or Terran Ascendancy. You’ll need to familiarize yourself will all of them to master later missions. Some of them are the cool, defensive engagements with strong Whiskey Outpost vibes. Optimizing the defensive line in this game is pure joy. 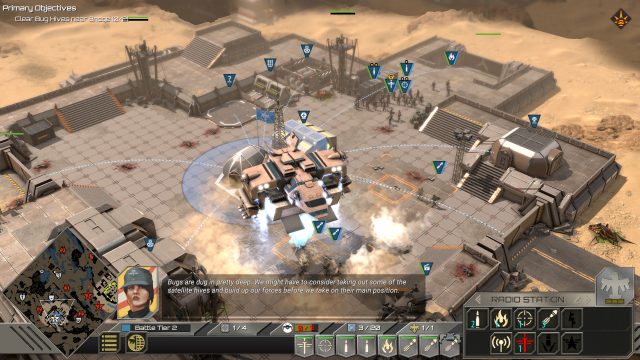 Although there is lots of fun in Terran Command, it’s impossible to escape the sensation of it being hopelessly stuck in the last century. There’s absolutely nothing here that wasn’t experienced a thousand times before. Twenty-two years ago, Starship Troopers: Terran Ascendancy was a much more advanced game, full of fresh ideas. It had meta progression, RPG elements, a story with higher stakes, and even better pathfinding. Its rocket troopers could fire mini-nukes, unlike the same unit from Terran Command. Another thing lacking from this game is the sense of combat weight. The typical bug wave looks like an unstoppable force, but there’s no kinetic clash when they reach your troops. No troopers and/or limbs are being thrown around; they just stay there and nibble at your unit, which fires at them without evident urgency.

Starship Troopers: Terran Command is a good investment for any classic RTS enthusiast who appreciates single-player above all else. It doesn’t have much staying power, though, having nothing to offer besides the campaign. It’s fun while it lasts, but it doesn’t last very long.