I am a novice witcher without the silver sword. I know that Kaer Morhen graduates are supposed to be poor, but this is ridiculous on a pretty basic level. How I’m going to do my job of slaying magical beasts without the essential tool of my trade? I can pick the easy fights with the basic monsters, swinging madly with the steel sword and hoping that the drowner or succubus will go down before I drop dead, or I can fold and pay a couple of bucks for the starter pack, which includes a low-level silver blade and some extra resources. There is also option three, intense grind for at least a week while saving every last bit of currency, and it looks like I’m going with that one. Luckily, there is a slight rule-bending here compared to the “big” Witcher games – some monsters are actually vulnerable to steel, enabling even the non-paying players to enjoy the game without the major hassle, probably in the hope of them becoming hooked and deciding to eventually ka-ching that credit card. Fictional reality bends to the economic necessity – Milton Friedman would be proud of the fact that his axioms seamlessly translate into the fantasy cyberspace. 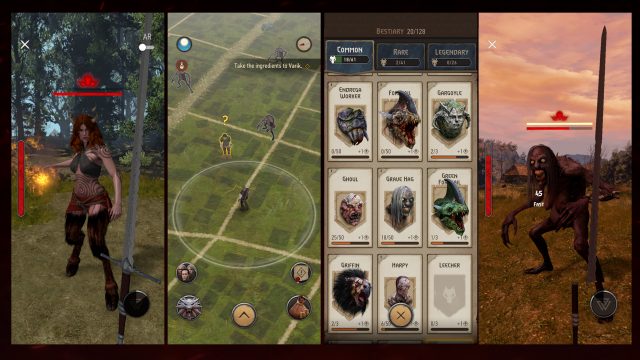 The Witcher: Monster Slayer is a location-based AR exploration game for Android and iOS similar to Ingress or Pokémon GO, developed by Spokko, a subsidiary of big old CD Projekt RED. Contrary to many similar games, it is both story-driven and open-ended, offering the best of both worlds for the intrepid player not shy of walking for hours like an urban zombie glued to the mobile phone. It uses Google maps for navigation, has story and daily quests, spoken dialogue, talent trees, reflex-based combat, rich production values, and, unfortunately, pretty restrictive freemium module – players who shun spending the real money will find themselves wanting for many things that are VERY slowly obtainable by grinding.

For me, the whole point of this game is fitness, as it acts as a powerful motivator to move my idle ass from time to time. Monster Slayer can make me walk for hours, which is doing wonders for my calf, gluteus, and quadriceps muscles, long dormant in this prolonged pandemics. I really don’t care that the game lacks the collecting aspect and competitive rush of Pokémon GO; in fact, solo orientation means that GPS spoofing assholes can only ruin their fun, not mine. So, I’m pretty keen to ignore some of its bigger shortcomings, such as frenetic, swipe-based combat with somewhat unprecise swing/parry detection.

When you initiate combat with the monster that had spawned inside your interaction circle, you move onto the preparation screen where you pick the sword you want to fight with and optionally select the potion or oil you want to be consumed/applied and even bomb if you need an extra edge. Every monster has multiple weaknesses that you can exploit – if it is vulnerable to steel, for example, you won’t opt for the silver sword; if he reacts negatively to kinetic damage, you’ll use basic bombs, not the demetrium ones, etc. 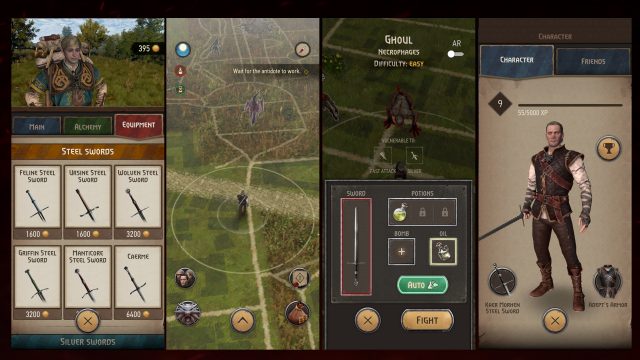 Once you are satisfied with the setup, you will enter the fray, and depending on the monsters vulnerability to fast or slow attacks, you will swipe your thumb in a frenetic or controlled manner, slicing away its HP. “Normal” monsters, without the skull symbol, can be easily slain just by swiping like a twitching maniac, but medium and hard ones require the expenditure of the consumables and parrying. Utilizing the proper sword and method of attacks fills up the critical strike meter, enabling you to inflict massive damage from time to time, provided that you don’t miss the fast bullseye sliding over the screen. Since no one can be called a witcher without the knowledge of low-level sign magic, you can also cast those in combat. As a novice witcher, you can cast only the fiery Igni (by drawing V on screen), and the rest of the signs can be learned via investing the talent points when you reach a sufficient level. You can fight every monster in the default „gamey“ backdrop or in augmented reality mode, which is pretty redundant and pointless unless you are into taking funny screenshots or making localized meme material. Look, guys, I’m fighting ghouls from our city hall, HAHAHA!

Besides providing XP, every slain monster drops some resources that you can use in crafting. Oils, potions, and bombs are essential for killing more difficult monsters, but the crafting process can be very slow – specialized bombs, for example, take two hours for a single piece! Of course, bombs, other consumables, and some permanent upgrades can be purchased with real money. Apart from the silver sword, you’d want bigger bags as the starting inventory is quite limited, and eventually, you’ll seek better armor. Or you can slowly grind for everything, which is the whole point of this walking affair.

The Witcher: Monster Slayer is a perfect low-key fitness trainer for nerds. If you don’t take it seriously or try to overthink it/pick holes in the plot and lore, you might really enjoy it. Defeating the monster of laziness was my biggest personal victory so far, and for a week now, the game keeps delivering the motivation to move, sweat, and melt that persistent fat. Better shape, here I come!