Shark Bait Cove riddle is one of the treasure puzzles in Sea of Thieves. It’s part of a voyage that leads to a chest, but instead of a proper map with an X and all that jazz, you get a riddle that points towards the location. If you’re not well versed in this kind of challenge, you might get stuck. No worries, though – we’re going to help by showing you the Sea of Thieves Shark Bait Cove riddle solution & location in this here guide.

Where to find Shark Bait Cove?

The first sentence of the riddle says: To Shark Bait Coive you may be bound, in search of fortune in the ground. Shark Bait Cove is an archipelago in quadrant I-24. Set your vessel’s course and get there. 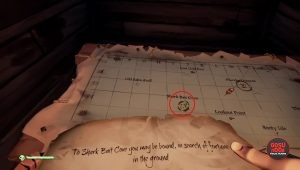 Once you reach the archipelago, head to the island in the southwestern part of the outer ring. Once you’re there, go to the outer shore (the one looking towards the ocean) and look for a stone wall. There should be a painting on it, of a stick figure fishing. There’s a ruined boat nearby, with a campfire next to it, still burning. Stand next to the fire and follow the rest of the directions – seven paces west-by-north west.

Do some digging and you’ll find the chest soon enough (it’s close to the small rock in the sand). You don’t actually have to drink grog in order to get the treasure, mind. Just use your shovel to uncover the chest, grab it and take it to the nearest outpost. Talk to the vendor from the faction that gave you the voyage and sell the chest for a pretty penny.

Having information on the whereabouts of the riddle’s solution makes it too easy sometimes. In this case, we know this part of the solution is in the northwest part of the small island cluster named Shark Bait Cove. The Fisherman’s Grave is on the part of a small island which overlooks the inner circle. It has a wooden plank, a couple of rocks, three fish skeletons, and two candles in bottles.

Full Description: Lantern raised high through the gloom you steal, at the twin red sharks inside Sharkbait Cove to the North more will be revealed.

Luckily for us, thanks to this part of the riddle, we know where Sharkbait Cove is located. Head towards the north until you almost reach the end of the island. Just as you get close to the northernmost part, coming from the inner circle, you can spot a small cave entrance, covered with some foliage. As you enter, you’ll notice this is a small cave, and there’s the drawing of Twin Red Sharks on the cave’s wall. Raise your lantern close to any of these sharks to find out the next clue.

Full Description: To the shark statue on the North outer ring now ye need to tread, a secret shown when this map is read.

Additional Description: From the shark statue on the North outer ring, if I remember right, head West to the large tree, unearth my gold there you might.

The solution for this part of the puzzle is only a few meters away from the previously mentioned Twin Red Sharks. We are still on the northern part of the island, where the cave is. This time, look to the top of this island, towards the east side. On the edge of this plateau, you should spot the Shark Statue. It is an exquisite piece of art, with scary teeth. Bring up your riddle to reveal the next part.

PREVIOUS POSTSea of Thieves Where to Find Snakes, How to Catch & Calm Them Down