The Strike Your Colours is a Commendation in Sea of Thieves that you get when you return fire on a specific ship. This happens during the Captains of The Damned Tall Tale. As is the case for all the Tall Tales in this latest Season, this, too, is very buggy. We already covered some of these bugs in the Sunken Pearl Tall Tale. Since we try to help players however we can, we have written this Strike Your Colours – Sea of Thieves Return Fire Commendation guide. It will help you earn this Commendation and overcome the bugs that may occur during this quest. 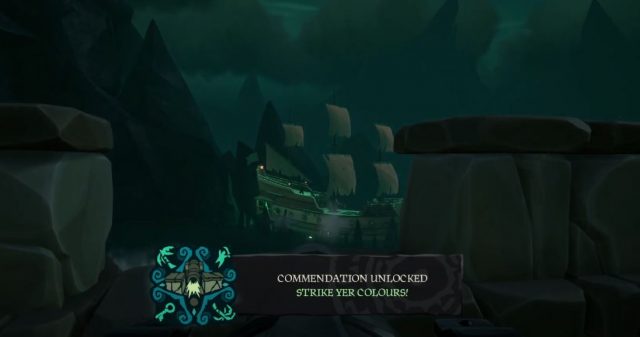 How to Complete Strike Yer Colours Sea of Thieves

The Strike Your Colours (or, as it is written in the game – “Strike Yer Colours”) Commendation can be earned by returning cannon fire on Captain Barbossa’s ghost ship. This happens late in the questline, during The Raid on Isla Tesoro section. When you approach the island on your boat, you will see that Captain Barbossa is raining down heavy fire from his ghost ship’s cannons. Dock at the pier, and make your way up the stairs to the fort directly next to it. Here, there are rows of cannons returning fire. Approach the barrel which has cannonballs in it and interact with it to get some cannonballs in your inventory. Next, approach the cannon directly next to it. You will easily recognize it since it doesn’t have anyone firing from it.

Aim your cannon at Captain Barbossa’s ghost ship and fire off a couple of shots. Shoot until the “Strike Your Colors” Commendation appears on your screen. In case this doesn’t appear even after several direct hits on the ship, restart from the checkpoint to try again. Also, please note that this is in the third zone of this Tall Tale, and that you cannot shoot on the ghost ships in the second zone. It has to be from this cannon and you have to fire on Captain Barbossa’s ghost ship. That’s everything you need to do in order to earn the Strike Your Colours – Sea of Thieves Return Fire Commendation.