Anayama the Peddler is one of the NPCs in Sekiro: Shadows Die Twice. You’ll meet him early in, in the first area. He sells a bunch of stuff, and he also asks for your help on several occasions – to find out what Ashina samurai want, and to find him someone for battlefield looting duties. Whenever you help him, his inventory will expand with new and interesting items. This guide will walk you through the Sekiro Anayama the Peddler quest.

Where to find Anayama the peddler?

You’ll first meed Anayama in the Ashina Outskirts area. He has a stall set up near the Outskirts Wall Stairway idol, the one before the Chained Ogre fight. Talk to him, and he’ll want to sell you information. Give him 50 sen, then another 100, and he’ll open up his shop for you. After you’ve finished shopping, he’ll ask you for a favor. He wants you to find out what Ashina samurai want, so he can sell it to them. 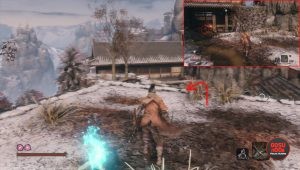 IMPORTANT NOTE: You’ll also meet him in the Hirata Estate area, preparing to loot a house. It might be tempting to just cut him down then and there, to protect the villagers, but doing so will make him disappear in the present and you won’t be able to finish his quest and buy the rest of his stock.

Now that you found him and started his shop by donating 150 Sen, you can buy stuff from him. The most important thing you can get from him is Phantom Kunai. It costs 3000 Sen. It is an upgrade for your Shuriken Prosthetic Tool. It replaces your Shuriken with sharp blades and adds additional white ball projectiles. If you buy it you’ll have to go to the Sculptor to install it. To unlock the rest of his inventory you’ll have to do additional steps in his quest.

In order to find out what Ashina samurai want, you’ll have to travel to Ashina Castle. Go to the Old Grave idol, turn around and go into the passage with the black monk and another enemy. Immediately turn right. You’ll see two soldiers on the bridge there. Eavesdrop on them, and you’ll find out the samurai want salt.

After completing this step you’ll now be able to buy more stuff from him. The most important thing here is that you’ll be able to buy infinite amounts of Black Gun Powder and Scrap Iron for 150 Sen.

After you’ve told Anayama about the salt, you can go on your merry way. Next time you return, he’ll ask you for another favor. He needs you to find someone who can help him loot battlefields – someone big, strong and thick. The perfect person for the job is a gentle giant named Kotaro, a resident of the forests around Senpou Temple.

Travel to the first idol, and as soon as you exit the building, turn right. You’ll see Kotaro sitting with his back against the tree, sobbing. After you talk to him, you’ll need to get an item called the Red and White Pinwheel. Kotaro is involved in another quest, and if you bring him this item, you’ll fail the other quest. For more information about the consequences of both choices, check out our Kotaro quest guide. 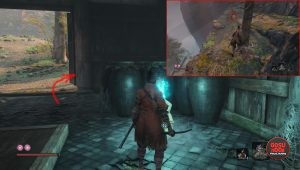 Where to find Red and White Pinwheel

The Red and White Pinwheel is also located in Senpou Temple. It’s on the top of the Senpou Temple cliff – you can get there by spawning at the Shugendo idol and heading up until you reach the temple, then turning left. You’ll see a bunch of pinwheels on the cliff, and you’ll be able to pick the glowing one. If you need detailed instructions on how to get there, check out the video at the bottom of this article. 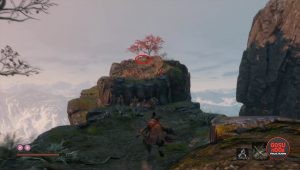 Once you bring the pinwheel to Kotaro, you can suggest a travel destination. Tell him about Anayama and how he needs help. Kotaro will then go to him, and the next time you visit Anayama, the giant will be there. Both will seem happy with their situation, and that will be the end of the quest.

You are now able to buy additional items from the Peddler. He adds supper rare upgrade materials to his stock. For 300 Sen each you’ll be able to get 3x Yellow Gunpowder and 3x Lump Of Fat Wax.

Like many NPCs in From Software’s games Anamaya can be killed. Many players mistake him for an enemy. If you killed him you can restart the game, because he’s not too far away from the start. You can just keep playing and avoid killing him in your New Game +. What you’ll miss is the Shuriken upgrade that is useful but not essential. Having access to his inventory of upgrade materials is very useful, but not essential. In any case I would avoid doing his quest line to the end, because keeping Kotaro in another place affects the ending of the game. If you think you can’t live without his items then start the game anew.