Prosthetic tools are secondary weapons in Sekiro: Shadows Die Twice. When used in tandem with your katana, they allow you to perform special attacks that can stagger enemies, break their blocks, distract them or apply debuffs. You’ll find them scattered around the world as you go, and you’ll want to get as many as you can. If you’re having trouble finding them, as they can be well hidden, this guide will show you all Sekiro prosthetic tools locations.

Note: This guide is under construction. We’ll update it with new locations when we discover them. Don’t hesitate to share any findings of your own in the comments.

This is the first tool you can find. Go to the Sculptor’s Idol at Outskirts Wall – Gate Path. There’s a house next to the cliff there. Use the grappling hook to get to the upper floor of the house, and you’ll find the shuriken wheel next to a dead body.

You’ll find the firecrackers at a vendor – you’ll need to pay 500 gold for them. To get to the Crow’s Bed Memorial Mob vendor, spawn at the Outskirts Wall – Gate Path idol and go through the building next to it. Cross the courtyard an get up on the eave above the gate. If you look to the left, you’ll spot the merchant’s tent atop the mesa. You can climb it using your grappling hook, but you’ll have to go to the other side in order to find the anchor points.

The barrel can be used to unlock the Flame Vent prosthetic tool. You’ll find it in Hirata Estate, on the slopes leading up to the castle. It’s on a road with rows of houses on both sides. There’s a bonfire at the end of the road, with several enemies around it. The tool will be in the fire. 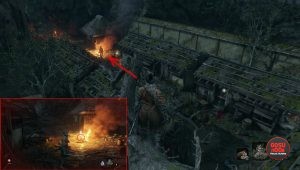 After you get the flame barrel, go up the slope and turn left. You’ll open the big gate leading to the previous idol. When you turn around, head into the yard on the left – there are two enemies there. When you defeat them, open the door of the shrine and you’ll find the tool inside.

Spawn at the Bamboo Thicket Slope idol at Hirata Estate. Head up the slope and immediately grapple up and to the left. Jump into the water and swim under the bridge. Use the hook to get up on the branch and follow the ledge. Hit the wall next to the item to reveal a passage. Follow the tunnel and use consecutive wall jumps to get up. You’ll end up in front of a shrine. Open the door and you’ll find the tool inside.

This one is in the Sunken Valley. Spawn at the Gun Fort idol, then cross the bridge and go down the stairs. You’ll have to defeat a mini boss called Long-Arm Centipede Giraffe. After you do, you’ll see an item glowing at the base of a big statue. That’s the one you’re looking for. 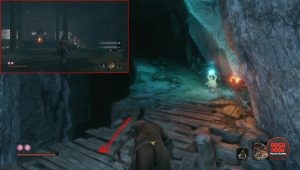 You can get this one from the Ashina Reservoir, but you’ll first need the Gatehouse Key. Spawn at the Ashina Castle idol, then stand on the bridge next to the old lady and grapple across the chasm. You’ll see a bridge through the gate, with two enemies on it. One of them will drop the key. Now you can go to the reservoir. The horn will be in the building across the courtyard from the tower you rescued Lord Kuro from in the prologue, in a chest.

You can buy this one from the Blackhat Badger vendor. He can be found in Ashina Castle, near the Old Grave idol. Spawn at the idol, then jump off the edge and onto the roof with the giant hole. Drop down the hole, and you’ll be face to face with the merchant. You’ll need 1600 sen for the transaction.

This one is also in Ashina Castle. Spawn at the Upper Town – Antechamber idol, then go into the big hall with the patrolling enemies. Jump down from the gallery and hang onto the big beam using your hook. You’ll see four enemies at he bottom. Deal with them, and then you can go into the side chamber and get the tool from the chest.

We haven’t actually found this one, but we’ve heard about it. It’s supposed to be in the Sunken Valley, near the Bodhisvatta idol. Look for a mini boss called Guardian Ape. The tool will drop from him.

NEXT POSTSekiro Flame Vent Location – How to Get Flamethrower Prosthetic Tool