It’s been ten years since Skyrim was originally released. During that time, we have been treated to numerous re-releases of the game. The newest one comes in the form of the Anniversary Edition. And while this new edition of the game has the most new content added to it – such as fishing – a lot of things have been added to the Special Edition as well. One of these concerns the Flawed Varla Stone item. Originally a Rare Curios Creation Club paid mod, it is now part of both these editions. And, as our Skyrim Flawed Varla Stone guide will show you, it’s not at all hard to get it. 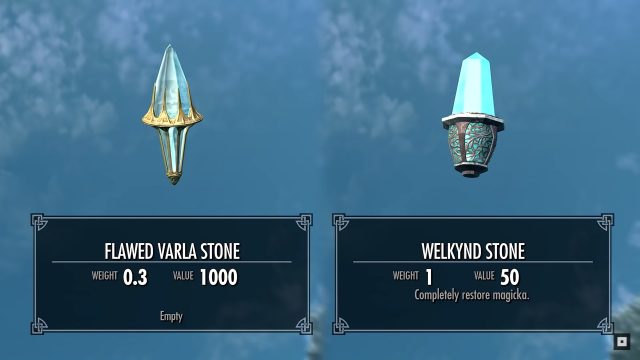 How to Use Flawed Varla Stone in Skyrim

The Flawed Varla stone functions similarly to Azura’s Star. While it doesn’t hold the same amount of soul power as the AS and is comparable to the Common Soul Gem, you can recharge it as you would the AS, making it pretty useful. Its origins date back to the Ayleids. This now presumed to be extinct race of Elves once dominated much of Tamriel. Before humans and other races rose up to rebel against them, forming the Alessian Empire (the precursor to the Septim Empire), they created many wondrous artifacts. The Flawed Varla Stone is one of such creations, albeit it one of the rare few that still exists.

There are two ways you can get Flawed Varla Stones in Skyrim Anniversary and Special Editions. The first of these involves finding it in chests. Of course, this depends on RNG, so it’s not a guaranteed method of acquiring it. The second is much more reliable. You can buy it from traveling Khajiit trade caravans. Valued at 1000 gold, it is a costly item, but well worth it if your character build relies heavily on Enchanting.