Skyrim: Anniversary Edition is the latest re-release of this classic open-world RPG. To celebrate the game’s 10th anniversary, developers Bethesda have added a bunch of new content into this new edition. We’ve already covered the new fishing system, as well as the Saints and Sinners questline, and now it’s time for the Unquiet Dead quest. Several things about this quest make it somewhat difficult to complete if you do not know what to look for. But, doing this will unlock the farmstead which you can then upgrade, so it’s definitely something that you will want to do. Luckily, our Skyrim Unquiet Dead – Rin’s Location, Golden Hills Plantation guide is here to tell you everything required to complete it. 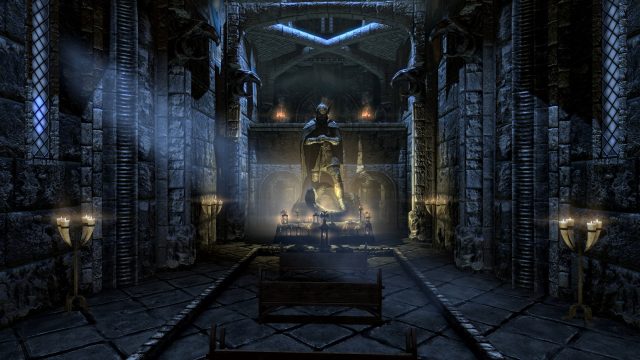 Rin’s Location – Find Out What Happened to Rin

The Golden Hills Plantation is a short distance east from Rorikstead. We have marked its exact location on a screenshot below, so you won’t have to do much wandering. When you enter this location, you will see that something is very wrong here. There are dead bodies in front of the house, and you will get attacked by a ghost. After you take it out, the Unquiet Dead quest will begin. Read the note next to the body in front of the house, and then head inside. Immediately after entering, head down to the cellar. As soon as you have gone down there, turn right. Next to the beam and the barrels, there is a button. Press it to reveal a hidden room. Inside, read Jonquil’s journal on the Alchemy Lab table.

Next, head to the second floor and read Urval’s journal on the table there. Leave the house. Looking directly from the front door, you will see several oddly shaped trees a short distance away. Go towards these. Behind them, you will see a well and some bones scattered around it. There is also a wooden toy sword there. Pick it up. Return to the house and place the sword there. Rin’s ghost will appear to thank you for putting him to rest and reward you with the key to the Golden Hills Plantation.