Force essence is a type of collectible in Star Wars Jedi Fallen Order. They’re a kind of force echo, and you’ll recognize them by the blue glow. When you collect three, your maximum force will increase. They’re scattered around the universe, and there are quite a few of them. If you’re having trouble finding them, our Star Wars Jedi Fallen Order force essence locations guide will help you.

The first force essence can be found on Bogano. It’s in the workshop that’s part of the Bogdo Sinkhole, the round room with the three giant fans on the floor. As you approach atop the pipe, you’ll have to use the force to slow down the big fan – this will allow you to enter the room. Do the same with the central fan on the ground, then go past it and to the workbench. Interact with the wisp and you’ll unlock the Research Notes databank entry, a story about how the jedi used the room to study the giant golden orb. 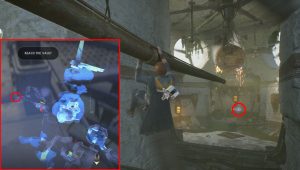 Keep in mind that you’ll need three in order to get the force upgrade. Don’t expect to have more force after collecting only one or two. Although we don’t know how much force each increase will contain, it’s safe to assume the road ahead is long. A quick glance at the trophy list shows there’s an achievement that unlocks after collecting 75 force echoes, called Echo Location. It’s true that this includes life essences and regular echoes as well, but we don’t know the distribution – it might turn out that most of those are just regular databank unlocks, but we expect at least thirty of the useful kind (fifteen each).

We’re going to keep playing the game and adding new locations as we discover them, so stay tuned.