Base defense can become quite a big gameplay factor in State of Decay 2. It can, also, be one of the hardest tasks in the game. It sometimes feels like all you do is running back to the base to defend it and restock supplies instead of exploring the open world. Hordes of zombies seem to constantly target your base. Your followers seem to spend all your ammunition and meds just to fend them off. We’ll try and provide some tips and pointers to help reduce zombie horde attacks on your base and about base defense in general in State of Decay 2.

Basic Base Defense Tips for State of Decay 2

A good start in preventing frequent base attacks is to clear out surrounding buildings and area of zombies. They will respawn after a while, but you should stay safe until that happens. Lookout for nearby infestation points and try and clear them out. This also helps reduce the possibility of a zombie horde attack. Plague hearts keep creating plagued zombies. Get rid of these and you may be able to sleep a little safer. Just remember that each destroyed plague hearth makes the next one harder to kill. Build a Watchtower in your base. This removes 2 threat from your zombie meter. It requires a guard and ammo, but upgraded version removes even more threat. Do not create your base in an urban or overrun area, unless you have a lot of armed followers and supplies to fend of the attacks. Rural areas with lot of empty space around will make things easier on you.

Reduce noise of your base to reduce zombie horde base attacks 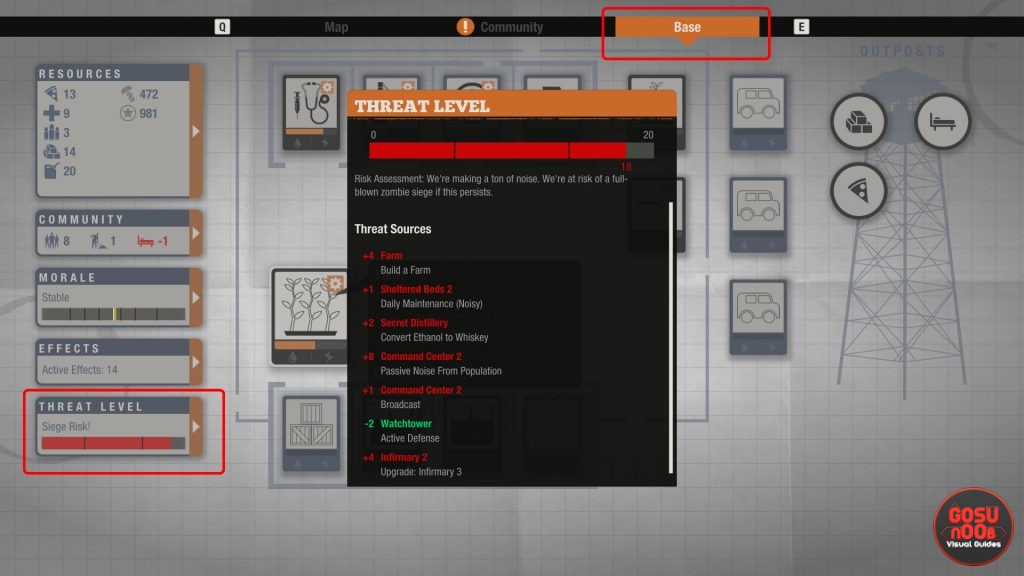 Noise will attract more zombies. Who would have think? Go to your map, then choose base in the upper menu to see your base facilities (or press B on keyboard). In the lower left corner is the Threat meter. This tells you what makes noise and how much of it. Based on this the game calculates how often you will get attacked by zombies. Having more people inside your base creates more noise! Do not overcrowd your base until you have enough materials and supplies to defend it. Certain buildings create a lot of noise. Electric generator, for example, is great for raising morale, but what help is it to you of having happy, yet dead, followers? Generator creates a lot of noise. Try and build Solar array instead, but you will have to have a base with a big slot to build it. Sheltered beds also make noise, so dismantle some if your threat level is too high. Construction creates a lot of noise. Do not build multiple base modules at once. Build them one after the other. If you finish the game you will unlock legacy boons and if you had a builder leader his boon provides noiseless electricity and water.

How to defend from a zombie horde attack on your base 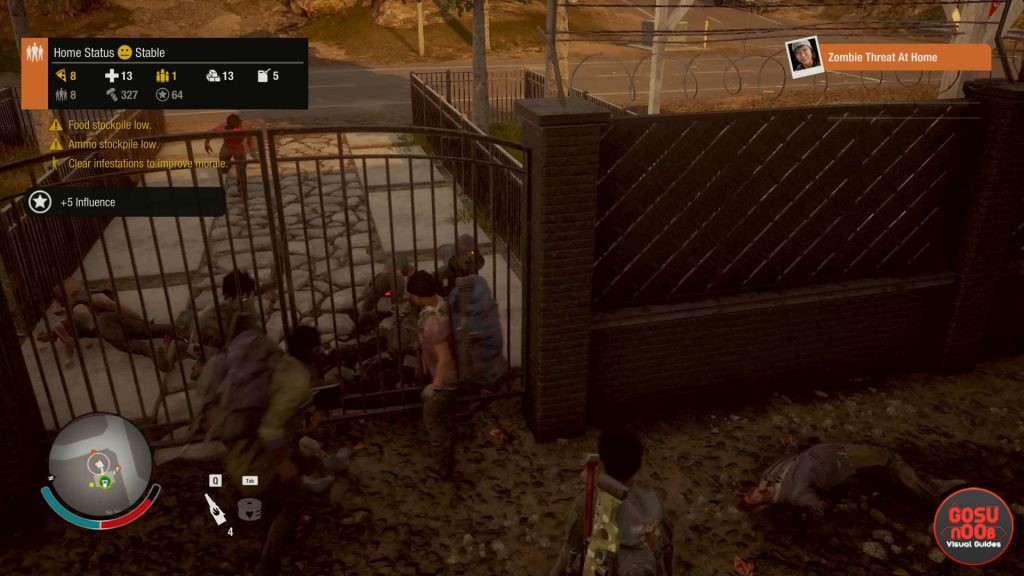 If your base has holes in its walls it will be harder to defend. Try and choose a base with only a few entry points and high walls. When the zombies attack they will start banging on your base doors. If you open them they will stumble and fall, opening an opportunity for one shot kills. Just remember the to close the doors afterwards so you can repeat this trick. There is also a trick where you park some cars in front of some of those entrances in such way that the attacking zombies can’t enter. You leave just one entrance that way and all the zombies will funnel through that single point of entry. This makes it much easier to kill them and your life easier.

To summarize, you want to build watchtowers and keep your noise levels at bay to have zombie attacks as seldom as possible. We hope these tips prove useful for you and make your State of Decay 2 life a bit easier. If you have additional tips or help for players make sure to leave them in the comments bellow and we will update the article.