Warp paintings are special portals in Super Mario Odyssey. They act as shortcuts between kingdoms, but they also let you reach some of the best hidden power moons. Each kingdom has at least one, and sometimes they’re really hard to find. That’s why we’ve put together this list, to show you all Super Mario Odyssey warp painting locations and help you get those Secret Path power moons.

The painting in Cascade Kingdom will lead you to Bowser’s Kingdom. To find it, start at Odyssey’s landing site at Waterfall Basin. Turn right as you get off the ship, and head towards the waterfall. When you’re near the cliff, jump into the water and swim behind the waterfall. You’ll find the portal in a cave there, along with some local currency.

This painting will teleport you to Metro Kingdom. To get it, you’ll need to start at the Tostarena Ruins Round Tower checkpoint. Approach the yellow Glyder and look east. You’ll see a lone pillar in the middle of the desert, a bit north from the purple lake. Use the Glyder to get down, and you’ll find the painting on the north side of the pillar.

This painting can lead to either Sand or Luncheon Kingdom, depending on whether you choose Lake or Wooded first. If you pick Lake, the painting will lead to Sand, whereas if you pick Wooded, it will teleport you to Luncheon Kingdom. Go to the Courtyard fast travel point. There’s a pool right next to it, with a fishing Lakitu. Jump into it and dive down the deep end – that’s where you’ll find the painting.

Like the previous one, this painting can link to one of two places. If you picked Lake Kingdom first, it will take you to Luncheon, and if you chose Wooded, it will open a gate towards Sand Kingdom. Travel to the Forest Charging Station, and shoot the scarecrow with your hat to make the platforms appear. Jump to the top platform, then backflip onto the steel beam above. You’ll see a cube on your right – the painting is on one of its sides.

This one also is also a fork – if you’ve played through Lake Kingdom first, it will lead you to Wooded, and vice versa. It’s extremely easy to find – travel to the Odyssey’s landing pad and go to the back of the ship. If you rotate the camera, you’ll see a walkway on the side of the building, leading right up to the painting. 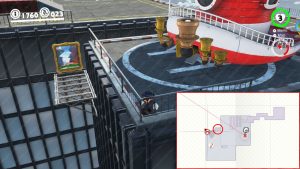 This painting will take you to Cascade Kingdom. To get it, you should travel to the Odyssey’s landing pad. Possess the first Ty-foo you run into, then glide across the area to the wooden blocks in the distance. Push them all the way to the other side using your newfound lung capacity, then jump onto them and up to the snowy platform. That’s where the painting is.

This one is the inverse of the one in Metro Kingdom. If you chose Lake first, it will take you to it, and if you picked Wooded, you’ll end up there. The painting is at the bottom of the tube at the Glass Palace. Use one of the water jets to launch yourself up there, then dive down to get to the portal.

The Luncheon painting will teleport you to Mushroom Kingdom. In order to get it, you’ll need to go to the Path to The Meat Plateau checkpoint. Possess the Lava Bubble jumping from the round hole, then swim north. Turn left through the opening, and head towards the island in the distance. Once you’re there, go right and down the stairs, and you’ll end up in front of the painting.

This one depends on what you chose at the last branch. If you chose Snow first, it’ll teleport you to Seaside, and vice versa. You can get it by travelling to the Main Courtyard Entrance checkpoint. As you spawn looking at the stairs, turn around. You’ll see two buildings – one on each side of the road. Go around the one on the right (left if you’re just arriving from the previous area). You’ll see the painting on the wall, on the far side of the building.

This one is similar to the previous one. If you picked Snow first, it’ll take you there. If you took Seaside, you’ll end up at that one. The painting is in the small wooded area south of the Odyssey’s landing point, on the ground.

NEXT POSTAC Origins Hyena Main Quest – Objectives Not Showing Up