Yoshi is Super Mario fans favorite and many have been asking if he’s playable in Super Mario Odyssey and where is he. The short answer is yes, but it will take some time before you get to do so. Be warned that the following article contains spoilers about the game’s ending and what happens after you finish the main story. Stop reading if you want to experience it for yourself. With its unique abilities Yoshi always stood out in Mario games. Having him in Odyssey would provide for more variety in level design. It would also allow you to have a break from just using one character’s moves. Super Mario Odyssey has a unique capture system where you can throw Cappy and posses creatures with it. You then control them and use their unique abilities. There are 52 of these in the whole game and Yoshi is one of them. 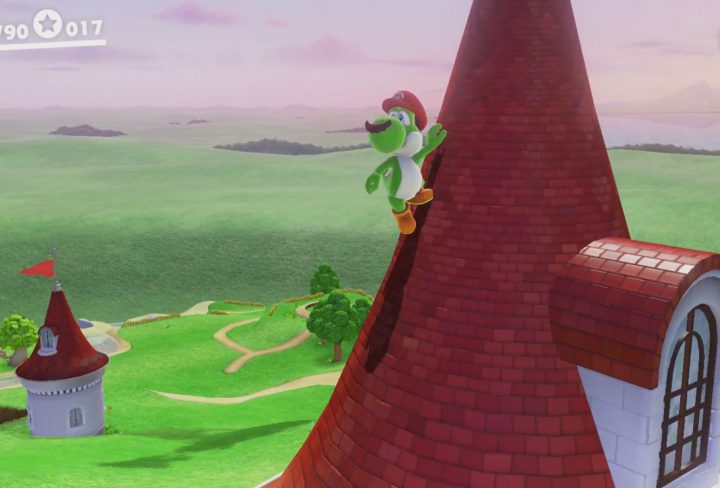 When can you play as Yoshi in Super Mario Odyssey?

You have to finish the main story of the game to get to the kingdom where Yoshi is. Defeating Bowser is just the beginning of end game in Odyssey. You then get to explore all the kingdoms you visited previously picking up Power Moons and unlocking new outfits. You also unlock Mushroom Kingdom where princess Peach’s castle is. On top of the castle is where you’ll encounter Yoshi. You first have to go behind the castle and use Cappy on a scarecrow found there (cap should rotate on its head). This unveils stairs up to the castle’s rooftop. You’ll see Yoshi’s egg that you can break and he’ll pop out. You can then possess him and you will be able to extend his long tongue to stick to surfaces. He is also encountered in later levels and some sections can’t be done without using him. Unfortunately, you can’t come back and use him in other kingdoms.

Yoshi is in Super Mario Odyssey and you get to use him as one of the capture-able creature. He is not a fully playable character as a replacement for Mario on all levels, but it is still nice to be able to have fun with our old friend. He will be useful in getting some of the Super Mario Odyssey Power Moons and you can also check out some of the other guides we have for the game.

NEXT POSTAC Origins Helix Credits Prices, Bundles & What You Can Spend Them On