There are several methods of fast travel in Temtem. Some are already implemented in the early access version, while others are planned as additions in future updates. They all help you cross large distances without having to go on foot, speeding up your transportation across the world. This guide will explain all Temtem fast travel methods, including smoke bombs, airships and mounts.

How to fast travel in Temtem?

The first method involves using smoke bombs. This is also the only method available in early access. You can buy smoke bombs from some Temporiums, like the one in Arissola. Using a smoke will end your adventure and return you to the last Temporium you visited. It’s clear they weren’t meant to be fast travel items, but a way to escape a perilous situation. However, they work well with a little planning – for instance, while doing the Denizan Icarus quest, you can visit the Arissola Temporium, go to the top of Windwart Fort, then teleport right back once you’re done. 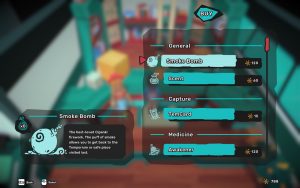 Mounts aren’t in the game yet, but you can see the greyed-out option in the menu, right there at the bottom of the first column. If we were to guess, we’d say they’re going to work like mounts do in any other game – you’ll get increased movement speed, but you’ll still have to steer and press down the throttle button.

Finally, there are the airships. You can see a dock with a moored airship in Arissola, and when you talk to the crew, they’ll tell you there’s no room on this flight. There’s even a map marker for the docks, which probably means we’ll be able to use these to travel between islands at some point.

We’ll keep an eye on things, and we’ll update this page as soon as more means of transportation are added.

PREVIOUS POSTHow to Get Climbing Gear in Temtem

NEXT POSTNessla Spawn Location in Temtem