Gone With the Sillaro is a side quest in Temtem. In it, you’ll have to help a woman get back her missing pendant, and she’ll reward you with a nice new technique course. Finishing the quest is easy enough, but only if you have the right tools. Since you probably won’t have those tools when you get the quest, you might end up thinking you’re missing a clue or something. This guide is going to help you complete Temtem Gone With The Sillaro quest, by showing you the missing pendant location.

How to start Gone With The Sillaro side quest?

When you finish the tutorial and leave professor Konstantinos, head east to the Zadar beach. You’ll see a woman walking up and down by the water – talk to her. Her name is Clara, and she has lost a special pendant. She asks for your help in finding it, and if you accept, the Gone With The Sillaro side quest begins.

Where to find missing pendant?

She’ll tell you she went swimming along the Sillaro, and she suspects that’s where she lost it. She’s right, and you won’t be able to find it without the surfing board. You’ll get this key item when you complete the first dojo and beat Sophia. Once you’ve obtained it, head to Brical de Mar. Once you’re there, jump into the water and cross to the other side. Head north, following the east coast, and disembark in the second cove. 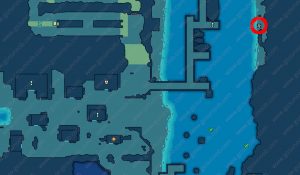 The pendant will be there, on the beach. Look for sparkles in the sand. Pick it up and bring it back to Clara, and she’ll give you the TC001: Tsunami technique course, which allows you to learn the tidal wave move you’ve seen in one of the dojo battles.