Uncharted: The Lost Legacy has a new gameplay video, featuring India’s Western Ghats area. This is where Chloe and Nadine venture to find the ruins of the Hoysala Empire on their search for the golden Tusk of Ganesh.

At the start of it, we see Chloe mapping out the key locations in the Western Ghats, including what looks like a central tower. The brief driving sequence ends with some appealing stealth-kill combat. It ends when Chloe destroys a door to some ancient ruins in order to retrieve a Hoysala token. Really Chloe, have you no shame?

What I wasn’t expecting to see while watching this trailer was the Western Ghats map. Chloe shows it a couple of times. You can spot your location on it, the marked areas of interest, and more. The map does feel a bit small, but considering that there are temples and ruins that go way deep, it might not reveal its true size. It will make keeping track of your surroundings more convenient, that is for sure. 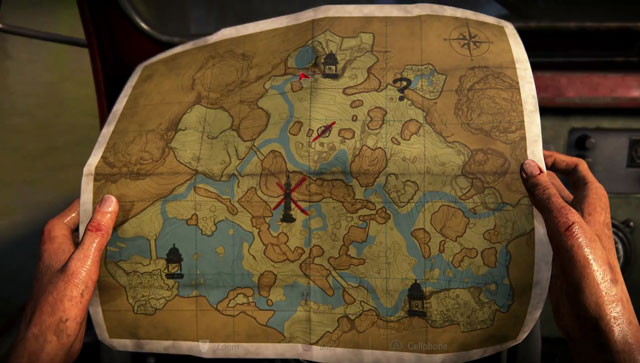 The last part of the trailer felt like a mandatory guide for finding the correct underwater swimming route. My guess is that many of us will drown here, and more than once. Although sometimes faster, the guns-blazing combat felt less appealing than the stealth approach from the start of the video. The trailer ends as it should, with a puzzle.

This is not the first Uncharted: The Lost Legacy gameplay trailer. More than a month ago, we had the chance to enjoy the ten-minute Chloe and Nadine extended gameplay. It feels like this one happened a bit earlier than the Western Ghats one, as Chloe and Nadine already have The eye of Shiva at that point, but I might be wrong. They probably got it through scavenging in Western Ghats. On the other hand, the first gameplay trailer gives off a strong impression that it was taken during the start of the game.

Uncharted: The Lost Legacy will launch on August 22, 2017. This is a PlayStation 4 exclusive, and it will cost $40. The Day One bonus consists of Jak and Daxter: The Precursor Legacy for the PlayStation 4, another Naughty Dog game.

NEXT POSTMafia 3 Sign of The Times DLC is Out, Here’s The Launch Trailer