Watch Dogs Legion received another batch of Ubisoft Club rewards today, with the release of the long-awaited online mode. They include two new pieces of headwear and a jacket, all based on other Ubisoft games. They’re purely cosmetic, but a nice way to freshen up your characters after all this time. You can get them in exchange for Ubi-coins or whatever they’re called, but some people are having trouble redeeming them. If you’re among them, this guide will show you how to redeem club rewards in Watch Dogs Legion.

How to redeem club rewards in Watch Dogs Legion?

Once you’ve fired up the game, you should go to the main menu. Select the Ubisoft Connect button from there, and an overlay will appear. One of the big cards in the middle of the screen will say “rewards”. Click on that. 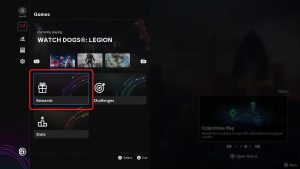 You’ll be met with a host of club rewards. The new ones should be at the top, marked with a red badge with “new” written on it. Select the one you want, and you’ll be offered to exchange your Ubi-coins (the gold ones you get from buying games, completing challenges and such) for the reward. Accept and the new item should appear in your wardrobe.

The issue some people are having right now is the game refusing to let them redeem these rewards. If this happens to you, there’s nothing you can do but wait. It’s a problem on Ubisoft’s side, and they’ll probably have it fixed in a matter of days, if not hours. So just sit back and relax – maybe start that online crew you’ve been dreaming of for months – and check back in a few days.

We’ll keep a closer eye on the situation, and if anything changes, we’ll update the article.