Signs are the magic spells you can use in The Witcher 3: Wild Hunt. There are five of them, each with its unique effects and upgrade path. They can’t replace weapons – you won’t be able to specialize into a mage-like character – but they can help a lot if developed and used properly. In this guide, we’re going to show you all of the Witcher 3 Signs and their effects. 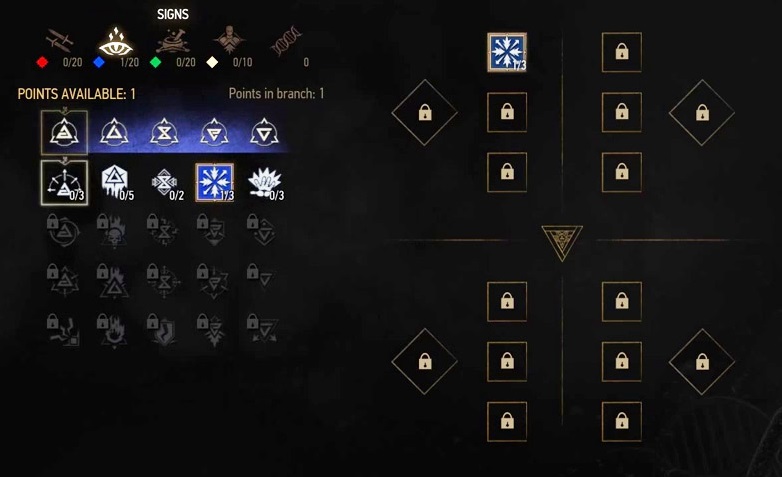 Signs drain stamina when used. You’ll have to keep one eye on your stamina bar at all times – if you run out during combat, things could get ugly fast. Thankfully, when learning and upgrading sign skills, you’ll always receive a bonus to your regeneration of stamina during combat.

The Aard sign creates a blast of force upon use. It can stun enemies, allowing you to kill them instantly using a finishing move, or knock them down, giving you room to breathe when the numbers are against you. It can also be used on inanimate objects, like doors, because knocking is a fool’s game. Upgrading it increases the force with which it strikes, the area of effect and the range.

This is the sign of fire. It allows you to deal fire damage to your opponents, with a damage-over-time effect if they aren’t resistant to fire. Enemies that are flame-retardant will receive damage from that first wave, but you won’t be able to set them on fire and watch them roast from afar. You can also set certain objects on fire this way, like torches and corpse piles. Investing skill points into Igni increases its damage output, chance of ignition and allows it to destroy armor.

Axii is the sign used for charming. Those versed in it can turn enemies into friends for a little while, clouding their minds and making them attack their own. It can also be using during certain conversations, in order to force those weaker minded to tell you what you want to know. Upgrading it increases the duration of the charm, and lets you manipulate more serious opponents.

This sign is used for protection. It allows you to cast a shield around yourself, preventing a certain amount of damage from reaching you. If you choose to upgrade it, you’ll get longer lasting shields that reflect damage back to the attacker, with a chance to knock them down even.

Yrden is a trap you place on the ground, that can slow down or stop your enemies dead in their tracks, while applying damage to them. When you upgrade it, you’ll get a bigger radius of trapping, the ability to place several traps and a better damage output.

NEXT POSTPrison Of Elders Teaser For House Of Wolves