Polish game developer CD Projekt RED managed to captivate audiences with their Witcher series of games. Blend of gritty storytelling, skillful combat, great role playing and a striking lead character – Geralt of Rivia – helped Projekt Red break into the top tier of RPG game makers. At this year’s GamesCom we had the pleasure of attending the presentation of the next title in the series – Witcher 3: The Wild Hunt.

We arrived to CD projekt RED’s booth filled with excitement. Witcher series brought something fresh to the RPG genre and having read the books and played the first two games, I was pretty excited to be among the people that actively participate in creating this virtual world for us. Excitement was shared by everyone because lines at the public booth have been enormous and even the press members at this presentations were beyond what you would expect of media professionals. This is understandable, considering that for many of us it would be the first time to see Witcher 3 in action. CD Projekt RED teased us with video footage of the game before and it all looked very good and pretty, but we all wanted to see what the game is like without any pre-rendered or tweaked footage.

Group of journalists that scheduled their presence at the Witcher 3 presentation weeks ahead were all looking around the press booth. Having a life sized statue of Geralt in the waiting area didn’t help calm my nerves. While waiting I took a peak at a mobile MOBA Witcher game that was on display. This seemed to be a nice project involving short battles using familiar MOBA mechanics with all the familiar characters being available for play. We were all too excited about the main game to go into much detail though. 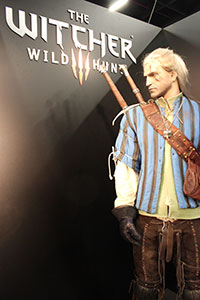 As we entered the presentation room I exhaled with relief. It was clear that we will be watching a live demo and not a pre-rendered presentation video. Very soon the show started. There was a person playing the game on a PC and that gameplay was shown on a big screen, all the while a developer was explaining what exactly is happening and what the game is all about. CD Projekt Red released a video of the very same playthrough we saw in the press booth so you guys can see what we saw at the bottom of this article.

Gameplay opened with a visit to Novigrad, a huge town you’ll be able to explore in Witcher 3. Visuals were striking and even with loads of NPCs on the screen everything seemed to work smoothly. I am not sure what computer was running the game, but it felt like it had to be a beast, because the visuals were just stunning. I also appreciated the fact that the town looked very alive and although this is not an MMO you almost felt like you were in a people populated area. Colors were vibrant and made more impact than in previous two games. That first impression of Witcher 3 was just stunning.

We next saw what seemed to be a side questline. This whole section of the presentation gave more insight into the storytelling aspect of the game. High quality voiceovers and facial animation felt like we were seeing a movie of sorts. I can go into every detail of the quest we saw and how the in-game cinematics were well made, but you can see it in the video. The important thing is that this felt like the highest quality RPG quest on par with the best in the genre (Bioware games for example). Those of you looking for good story will have something to look forward to. World of Witcher has always been interesting to me. Based on Polish and Eastern European fairy-tales and folk tales it features creatures and stories not overly used across the genre. This always gave the Witcher games a unique feel and made story quests like the one we saw even more enjoyable. Now that they are accompanied with world class in-game cinematics and voiceovers, in line with the latest trends of the genre, it all feels like the AAA hit game to look forward to.

Finally, combat ensued with some tougher enemies. PErson playing the game at the presentation clearly knew what she was doing. We saw lots of sign use to keep the attacking werewolves and wolves at bay. There was, of course, lots of dodging all over the place and it all felt very much in line with previous games in the series. Until I get my hands on the game myself, I won’t be able to say if it is better or smoother than before, but from what we saw during the presentation it is surely not worse. Steel and silver swords are still there along with familiar Igni, Aard and other signs. Despite the apparent skill, the person playing during the presentation had, the fight seemed to feel challenging.

In conclusion, coming out of that presentation I felt like I was seeing the next big RPG. There are some doubts in the Witcher community because of all the console optimizations and the game taking so long to make. Seeing the presentation live I am inclined to say that there is no room for fear. If they manage to bring the quality of graphics and gameplay we saw during the live presentation to various PC configurations and console players alike, Witcher 3 will be a great game to play.