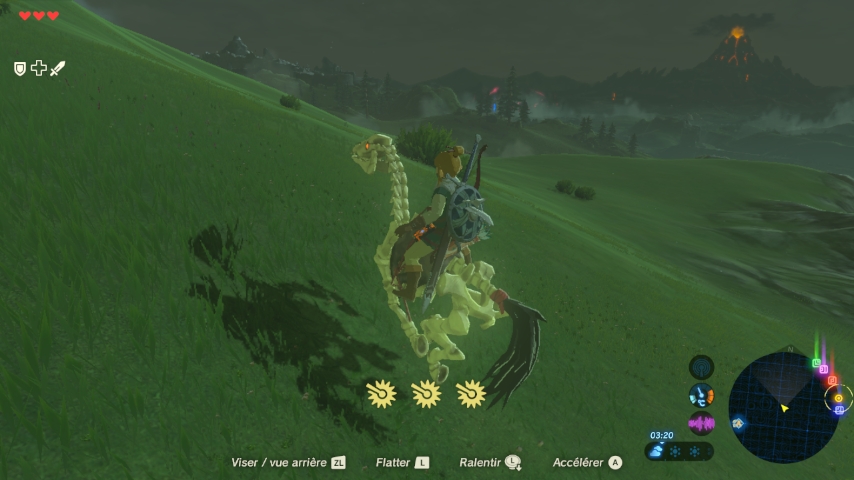 Skeleton Horses in Breath of the Wild

Have you ever wanted to explore Hyrule, but also look like the Grim Reaper while you do? The new Zelda game has got you covered! Among many other mounts that you can tame and ride in Breath of the Wild, there’s also skeleton horses with glowing, red eyes. These creatures, called Stalhorses, are undead mounts of skeleton bokoblins. Once you’ve defeated the undead bokoblin mob, their Stalhorses are yours for the taking.

You can find skeleton horses wherever there are bokoblins that ride horses, such as the Akkala Highlands. As with any undead creatures in the game, you’ll have to wait until night for the mob to spawn. Defeat the mounted, undead bokbolin without destroying the horse, and it’s all yours. Combine that with the Dark Link outfit, and you have the true stuff of nightmares.

Once you come riding in on a skeleton horse, every Hylian will react with fear, and their dialogue changes accordingly. However, there’s a downside to Stalhorses. Other than looking really metal, they’re not good for much else. They have fairly low stats and they’re not super fast. Also, you can’t register them at any stable, because the owners are understandably terrified. They think that the Stalhorse will eat the other animals in the stable.

The final heartbreak happens at dawn. Around five in the morning in-game, your skeleton horse will die, and there’s no way to get it back. You can’t pay the Horse Fairy to resurrect it, like with other horses. I guess that makes sense, since it wasn’t alive in the first place.

For more information on various mounts in the game, check out our Breath of the Wild Taming Horses & other Secret Mounts guide.

PREVIOUS POSTMass Effect: Andromeda and Nvidia would like you to look at these pictures

How to Flair Shot FIFA 23

Genshin Impact 3.1 is now out. Alongside many additions such as new characters, quests, weapons,…