Mini bosses are dangerous enemies in Zelda Breath of The Wild. They’re often really large, with lots of health and strong attacks. They also drop the best loot, so it’s always worth fighting them. You’ll need to know their weaknesses, their attack patterns, and of course, where to find them. In this guide, we’re going to show you Zelda Breath of The Wild mini boss locations, what they drop and how to defeat them.

Stone Talus is a giant boulder, basically. It’s a rock formation that comes to life and attacks you. Bombs can stagger it, allowing you to climb on its back. This is where its weak spot is – a black mining node. Whack away at it until you’re thrown off. Repeat the process until it’s dead. Using a mining tool like the sledgehammer can speed up the process considerably. It can drop precious stones like amber, opal, ruby, topaz and sapphire. It’s a slow fight, but if you’re cautious, it should be easy enough.

We’ve encountered two of them in the early areas. One was in the north of the Great Plateau area, on the outskirts of Hopper Pond. The other was near Dueling Peaks, on the edge of the mountain north of the river.

Cousin to the Stone Talus, the Igneo Talus is a giant flaming boulder. You can fight it the same way you’d fight the rocky one, except you’ll need protection from fire. In order to reach the mining node unharmed, you’d best invest in Flamebreaker Armor. If you don’t have the cash, you should grab a couple of Fireproof Elixirs. However, we recommend getting the armor – it has more uses. You can also shoot it with ice arrows or hit it with frost weapons, to extinguish the flames for a short while. The rewards you can get are the same as with the stone variant – a bunch of randomized precious stones.

We’ve found only one. It was in the Eldin area, on the slopes of Death Mountain. Follow the road the goes parallel to Goronbi River. You should encounter the boss before you reach South Goron Mine.

Hinox is a giant cyclops. He’s extremely dangerous – he can use tree trunks as weapons, and does a whole lot of damage. We suggest you stack up on healing fairies before fighting one. The eye is their weak spot – hit it and they’ll stagger. This will allow you to place a few hits before the giant gets back up. They’re also quite slow, so you can kite them around and throw bombs/shoot arrows at them. They drop Hinox Teeth, Hinox Guts, Hinox Toenails and various weapons. You can sell their parts to Kilton for a lot of Mon.

Stalnox is basically an animated Hinox skeleton. As such, it also has an extremely large eye, which is its weak point. Shooting it will stagger the monster, allowing you to dish out damage unpunished. It can even pop out of the socket and fall to the ground. When it does, hit it with all you’ve got, or else the Stalnox will respawn. They drop Hinox teeth and random weapons. We’ve seen one in Hyrule Castle Underground, and another in a forest in Necluda. 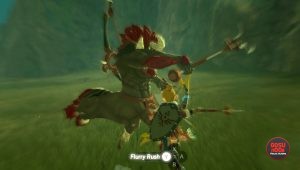 Lynel is one of the toughest mini bosses in Zelda: Breath of the Wild. Lynel Hoof, Guts and Horn parts are used to upgrade Barbarian set, Soldier’s Armor and Radiant set. If you need a detailed guide with map screenshots where to farm Lynels, and how to defeat them check out our guide Zelda Breath of the Wild Lynel spawn and farming locations.

The Molduga is a giant sand worm. They appear in the Gerudo area, attacking unsuspecting travelers. When you get ambushed, try to stay on solid ground. They only dive through sand, so they can’t get under you when you’re on a stone slab. Trow bombs to draw their attention – they’ll usually swallow them. When you detonate the bomb, it will stagger the worm, letting you smash it a couple of times before returning to your stone sanctuary.

NEXT POSTNier: Automata gets a launch trailer in the wake of North American release