Characters in Anthem can be male or female. You make the choice during character creation, where you select what your pilot will look like from a bunch of pre-made options. From what we’ve seen so far, the character cannot be seen at any point during the game, so the only functional difference is the voice. A number of players are unhappy with voiceover tracks for their chosen gender, and would like to switch. This guide will show you how to change gender in Anthem.

Can you change gender in Anthem?

You can’t change gender in Anthem. We’ve received official confirmation stating so, on EA’s official support site. Community manager EA_Ataashi explained so in reply to a user asking about gender/voice changes. However, what you can do is create a new pilot, if you’re not too far along. 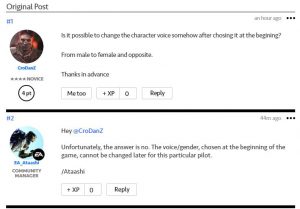 How to create new character in Anthem?

In order to create a new pilot, you’ll have to go all the way back to the splash screen. Once you’re there, past the “contacting online services” message, the game will ask you to press space to resume. Instead, you should look to the lower right corner. One of the options there will be to create a new pilot. You’ll get to choose their gender, voice and appearance, like you did the first time around.

According to the game, pilots share unlocks, currencies, appearance items and challenge progress. On the other hand, they don’t share vaults and story progress. In other words, you won’t lose everything, but you will have to start over from scratch – now fancy gear and weapons, no expeditions completed. This is the only way to get around the gender change restrictions, and if you’re not too far into the game, you won’t lose much if you decided to do it.

PREVIOUS POSTAnthem How to Play with Friends – Co-op, Invite & Join

NEXT POSTAnthem How to Create Second Character – New Pilot