Finding 15 Anthem Treasure Chests is part of the main story quest for the Tomb of the Legionnaires mission. You are tasked with finding and unlocking four Legionnaire Tombs. To unlock them you will have to complete Freeplay challenges. Trial of Yvenia is the challenge that requires finding treasure chests. It can be found in your journal under Challenges -> Expeditions -> Freeplay -> Trial of Yvenia. After completing it you’ll unlock Tomb of Yvenia. At the first glance, you’ll think it’s easily done, but then you’ll notice that finding 15 chests isn’t quickly accomplished. Which treasure chests count toward the completion of the Yvenia trial? Where to find them? Treasure chests are not marked on the map, thus, you’ll have to look around while flying in Freeplay. This article will show you where to find treasure chest locations in Anthem and how to complete Trial of Yvenia – Anthem tomb challenge. We’ll also give some helpful tips for other challenge steps. 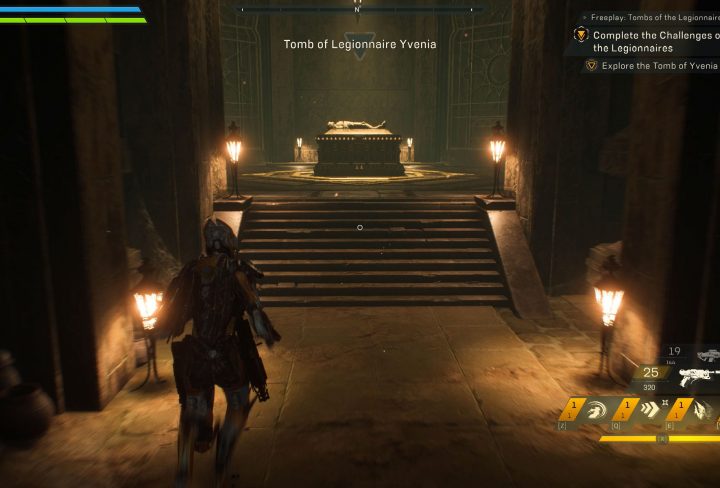 In order to unlock the Tomb of Yvenia, you’ll have to complete four steps in the challenge called the Trial of Yvenia:

Where to find Treasure Chests for Trial of Yvenia in Anthem?

You will have to enter freeplay and scour the open world map of Anthem to get treasure chests. You can find them hidden in caves, underwater, and hard to reach places or loot reward chests you get from completing world events. Both count toward the completion of the challenge. The trick is that it is you that has to open the chest. If you are in a group and someone else opens the chest it will not count. This makes things rather difficult if you have friends playing with you. It means that each of you will have to find 15 chests in the Bastion. We have found a farming route that will allow you to get 15 chests in no time and you can see it in the video bellow. Enter freeplay, collect chests for one player and end the session. Re-enter freeplay and repeat the route for another player until all of you got them.

Collectibles in Anthem are scattered all over the open world map. It can be a daunting task to find 10, but there’s a nice trick to complete this challenge step quickly. There are nine collectibles near the entrance into the Tomb of Yvenia. Entrance is marked in freeplay as part of the Tomb of the Legionnaires mission. Go into the cave that leads towards the entrance and you should see 6 collectibles scattered on the ground. There are three more glowing runes on the walls that you can also pick up and will count for the challenge. All that you have to do now is find one more collectible in the open world and you’re done with this step. Each member of your group can pick up the same collectible so you don’t have to hunt for 40, just 10. 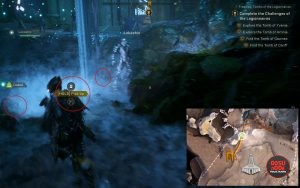 It is hard to find downed fellow freelancers when you play solo. You can almost never find any in freeplay. Your best bet is to play group missions on hard. If you reached the appropriate level and unlocked Strongholds you will surely be able to do that part of the challenge there. Otherwise, if you have a buddy willing to help out the two of you can enter freeplay and then one of you dies, while the other one revives them. This method will help you finish this part of the Tomb of Yvenia challenge very quickly.

We hope these tips will help you hasten the Trial of Yvenia challenge without much hassle and that you’ll be able to enter Tomb of Yvenia in no time. Each of the regions of Anthem’s open world has quite a few treasure chest spawn points, but they are well hidden. Flying around, looking for them is a grind. We hope this guide helps you alleviate some of it. Getting those collectibles and javelins repaired might just be a bit quicker with our tips as well.