Birds of a Feather is a side quest in Assassin’s Creed Odyssey. It’s one of Xenia’s treasure map quests. In order to complete it, you’ll have to find the Golden Feather of Ajax based on a vague map she gives you. What further complicates things is that she’ll give you three maps, only one of which leads to the treasure. Our AC Odyssey Birds of A Feather quest guide will show you where to find the Golden Feather of Ajax.

Two of the treasure maps are fake – when you find the location marked on them, the quest will be updated, but you won’t get the treasure. If you’re just looking to save time and not get the exact locations, here’s an image of the actual map you’re supposed to follow: 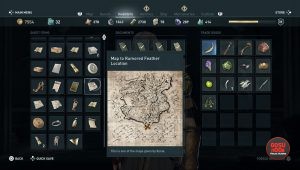 If you’ve been paying attention, the name Ajax might ring a bell. One of the islands in the game has a sanctuary dedicated to the mythical hero, as well as his tomb. It’s the Isle of Salamis, in the Attika region. It’s the one west of the Port of Piraeus. The location marked on the map is the Lighthouse of the Father of Ajax, which is at the southermost point of the island.

Once you get there and loot the few spots that are available, you’ll realize the feather’s not there. Talk to the lighthouse caretaker, and he’ll tell you a group of bandits have stolen it. You’ll find them north of the lighthouse, in the Mycenaean Tomb of Ajax. Once you’ve dealt with them, search the bodies and you’ll find the Golden Feather of Ajax.

Now all you have to do is bring it to Xenia and you’ll receive your reward and unlock Sacred Vows, the next treasure map quest.

NEXT POSTIkaros Prompt Notifications – How to Turn Off in AC Odyssey