Trials of the Gods are a weekly event in Assassin’s Creed Origins. Each one will last for a week, giving you a chance to earn a unique legendary item. They’re end-game challenges, meant for level 40 characters. This weeks challenge is the Trial of Anubis, in which you have to battle a giant version of the Egyptian god of death. When you’re done with the fight, you’ll get the Conductor of Souls, a legendary sword that heals on kill. If you’re stuck at any point of the quest, scroll down and check out our guide on how to defeat Anubis in AC Origins.

How to start Trial of Anubis?

In order to start the Trial of Anubis, you first need to make sure you’ve updated the game. The latest patch is required, as it adds the event. Once you start the game, the quest will automatically be added to your journal. It’ll tell you to head over to the north of the Great Sand Sea, to a location a bit southwest from Siwa. You’ll see a giant beam of light in the middle of the desert, coming down from the sky. Approach it and the fight will start.

How to beat Anubis?

If you tackle it at the recommended level, it’s a pretty straightforward fight. Find a good bow, preferably one that can shoot quickly – you won’t have much time to aim. Anubis has a glowing orb on his chest – that’s where you should focus your arrows.

He’ll attack you by summoning hyenas to trample you. In the first phase, only two will come at a time. Dodge them, then shoot the boss. From time to time, he’ll kick up a sand storm in a straight line. You can spot both the hyenas and the storm by the red glow on the ground, which shows their trajectories. Once you get him down to around 60% health, the second phase will start.

He’ll start summoning skeletons – they’re easy to deal with, and killing them will damage him as well. Avoid the red circles – they’ll damage you if you step into them. He’ll try to trap you with bone walls, and will send out hyenas in packs of four. It’s a busy fight, but it’s not difficult. Just shoot his glowing orb whenever you can, and collect the pouches from the ground to replenish your ammo.

When he gets down to 30% health, the hyenas will come in packs of six. There will also be more skeletons, and more bone walls. Just destroy the walls as soon as they appear in this phase, since he’ll try to hit you with storms while you’re trapped.

Once he’s dead, you’ll get the Conductor of Souls. It’s a pretty neat weapon, and a fine replacement for the fire sword. You might also get a blank quest item, but that’s a benign bug and you shouldn’t worry about it. If you don’t manage to beat the boss before the event is over, you’ll get another chance at some point. 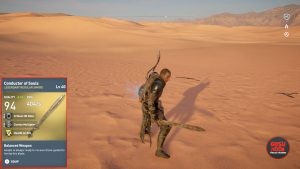 NEXT POSTRocket League on Nintendo Switch Gets Launch Trailer