Noctis is marked as the sixth Suger’s Legacy. It is another enigma style mission that gets unlocked once you complete Sequence 13, Memory 3 main story mission. It starts near Abbey of St. Denis in Basilica section of the map. It is a one star difficulty mission and its riddles are not too convoluted, but they do require you to move about the districts to solve them. 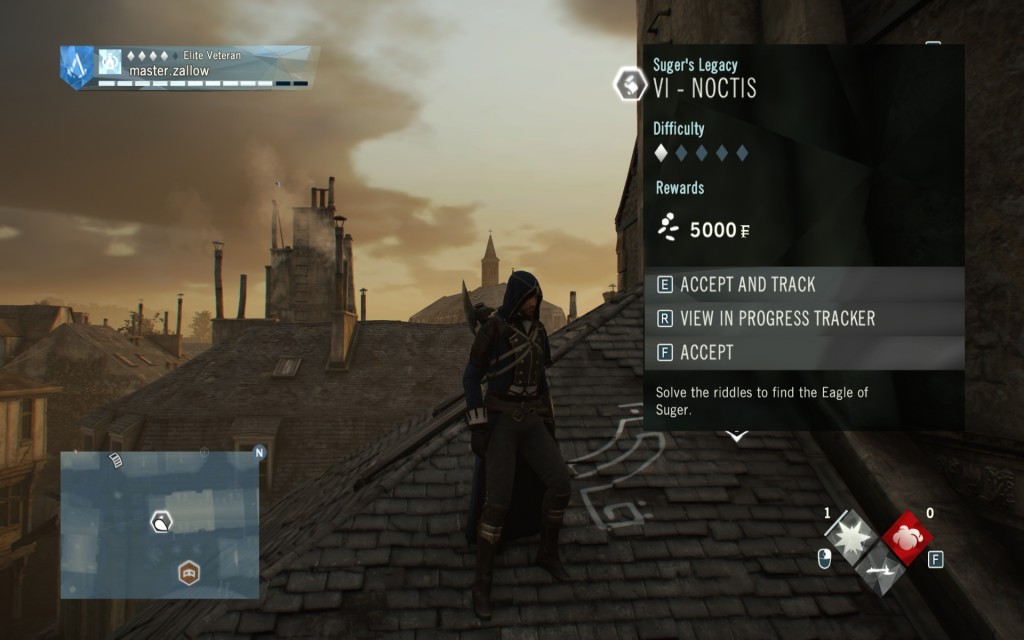 Starting location for this Legacy mission is located on the rooftop of a building west of Abbey of Saint Denis.
We have a full screenshot guide with explanations bellow, but if you prefer watching a video we prepared that for you as well (if you like the video please subscribe to our YT channel)

As cast from the moon
Should those walls aspire
To compare to the bloom
Of the crescent’s attire.

Crescent shaped walls is what we’re looking for and lo and behold Saint Denis Abbey has a wall shaped as half-circle. I started scouting the wall from where I started the enigma and when I turned my Eagle vision on the solution to the first riddle revealed itself. Easiest solution in the Dead Kings DLC by far.

Round a tree withering,
Just two fountains past,
Are lost souls feasting
While their short nights last.

So we are looking for a withered tree and a fountain(s). This is why you need to explore the surrounding area to familiarize yourself with notable landmarks. I found several withered trees in the vicinity of the previous riddle’s solution, but none of them had any fountain nearby. I changed my tactics to looking for a nearby fountain and down the street to the west I found a fountain and a withered tree right next to it. That turned out to also be the solution to the second Noctis riddle.

Obscure, eternal
Slumber is to those
Under rock and rubble
A feast for the crows.

I don’t know whether they wanted to have the whole Dead Kings theme supplemented by grim enigmas, but boy are most of these riddles dark? This one made me think of a cemetery right away. I figured since the last riddle took me from the Basilica district to the Cemetery district I might as well keep going in that direction. Cemetery is filled with enemies so I got into a fight while scouring the cemetery grounds for enigma solution. Enemies started running towards the alarm bell and as I killed them I started hearing the chime of a nearby solution rune (which I didn’t hear in the midst of a fight). Turns out there is a huge rock with some crows on top of it right next to the alarm bell in the north part of the cemetery. Solution to the third and final Noctis riddle is at the base of aforementioned rock.