The Perfect Crime is a Most Wanted side mission in Batman Arkham Knight. During this mission, which you can start in chapter 1, you are on a journey of finding out who is responsible for leaving six unidentified, mutilated bodies across Gotham. Although you can start it in chapter one, you can’t complete it until you progress through the main story long enough to be able to drive the Batmobile on Founders’ Island. 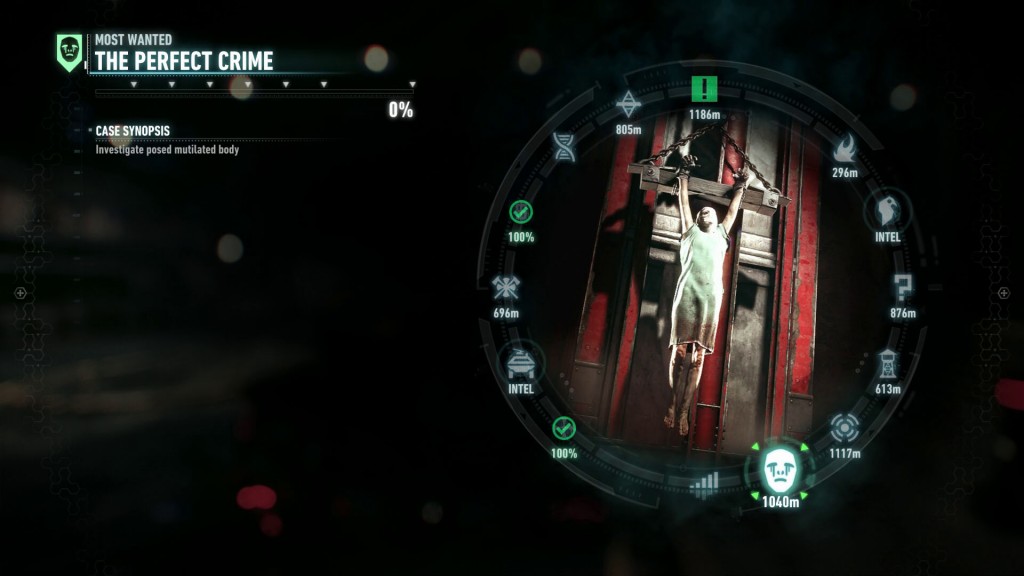 The first victim can be found at the start of the bridge in northeastern Bleake Island. It is tied to a large, red, metal bridge pillar. His name was Anthony Lund. The clues are as follows: Skin – Left Ear; Muscle – Right Abdomen; Bone – Left Hip.The second victim is in southwestern Bleake Island, on the second floor rooftop, next to the “Failure” sign. There are large inflated dolls above the road nearby. The victim’s name was Franklin Accardo. The clues are: Skin – Left Arm; Muscle – Chest; Bone – Left Knee.

The next victim is in the northern part of Miagani Island, just southwest of Bleake Island GCPD. You’ll find the “imperfect” body of Robert Kincaid on the second to last floor. The clues are as follows: Skin – Chest; Muscle – Right Arm; Bone – Left Foot Toes.The final Miagani Island Victim can be found on the second to last rooftop of the “La Tapastry” building, located next to the bridge in the southwestern part of the Island. This “broken” victim was Lisa Mendes. The clues are: Skin – Left Torso; Muscle – Right Eye; Bone – Right Arm.

The “defective” victim is located in the eastern part of Founders’ Island. Ella Montgomery is tied to a wall next to an ascending dirt road. The clues are as follows: Skin – Right Thigh; Muscle – Right Abdomen; Bone – Right Skull.The last body is located in northern Founders’ Island. Following the road at ground level, you’ll come to the part where small stores have lanterns on their corners. “Reject” victim Alison Wears will give you the final clue about the villain responsible for all this suffering. The clues are: Skin – Left Thigh; Muscle – Left Shoulder; Bone – Left Hand.

Once all the bodies have been inspected, Alfred will inform you about the location of Professor Pyg’s (Circus boss) hideout. He can be found inside the “Pretty Dolls Parlor” store, located in the tunnels in eastern Founders’ Island. This is the area that unlocks at this point. Don’t forget to solve the riddle and collect the riddler trophy inside (to avoid the trouble of coming back later).As you enter the last room of the Parlor, the final battle will start. Professor Pyg sends waves of enemies called Dollotrons to defeat you. Dollotrons will only stay down after the Takedown combo. If you don’t perform this attack, they will keep rising up. The final phase is when Professor Pyg joins the battle with several Dollotrons. Be sure to counter his attacks or you’ll end up dead pretty soon. Always keep your eyes on the Professor while fighting the Dollotrons.Once he is defeated release the remaining victims from the cages around the room (brake the yellow electric pad). You will be able to find them all (survivors and the Professor) in GCPD after you complete the mission.