Riddler Trophies are collectibles in Batman: Arkham Knight. There will be about 250 of these glowing, green neon question marks scattered about Gotham City.
▼Article Continues Below▼
Collecting them will net you WayneTech points, used to upgrade your equipment. In this guide, we’re going to show you where to find Riddler Trophies on all the islands, as well as other areas of the game. 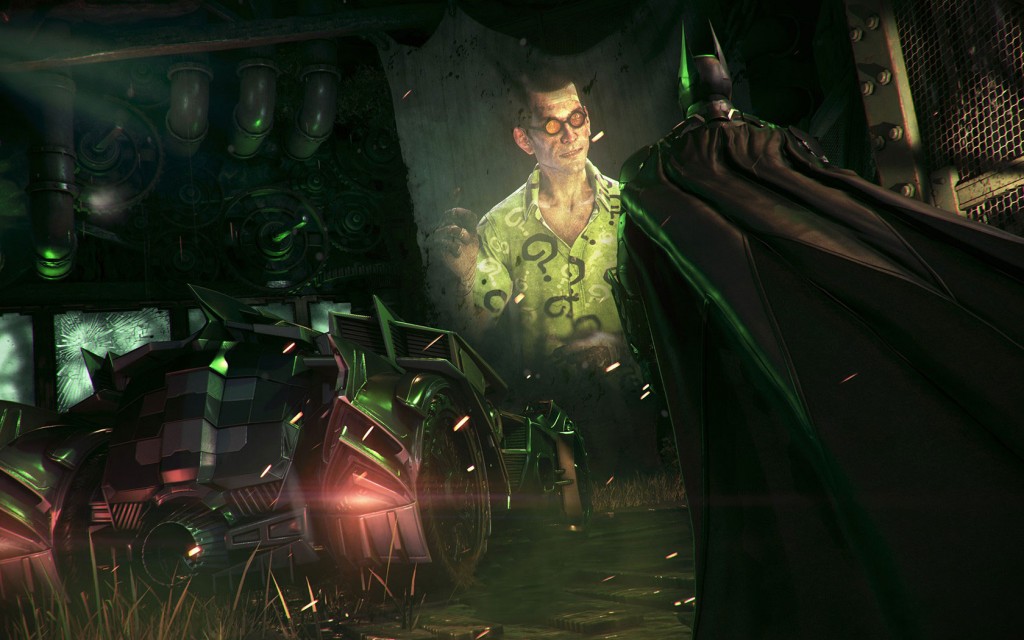 Some of them require you only to find them, while others have minor challenges attached to them. They’ll test your dexterity and wit, but don’t expect to get stuck too often. You may have to press buttons in the right order, shoot switches with your Batarang quickly enough, race against the clock to reach them before they become unavailable.

Bleake Island is the first of three islands you’ll visit in Gotham City, and home to the GCPD, the Clock Tower, ACE Chemicals and a lot of other, familiar locations. You can start collecting trophies right there, with about twenty Riddler Trophies hidden from view, waiting for you to use your detective skills and find them. We have a detailed screenshot guide with Bleake Island Riddler Trophies locations.

Miagani Island is the second island you’ll visit in the game, filled with notable places like the Miagani Botanical Gardens, Grand Avenue, Pinkney Orphanage and the glorious Wayne Tower. You’ll find more than twenty Riddler Trophies hidden all over the island, usually in high and inconvenient places. We’ve prepared a guide with pictures of locations of Miagani Island Riddler Trophies.

Founders’ Island is the third area of Gotham City you’ll unlock. It’s most notable for places like the Wayne Plaza, Cobblepot Manor, Goth Corp, Lex Corp, Amertek and Port Adams. There’s another batch of Riddler Trophies hidden on this confusing, labyrinthian island. We have written a guide that covers locations of Founders’ Island Riddler Trophies, for all you collectors out there.

Stagg Enterprise Airships are two zeppelins floating above Gotham City. You’re going to have to visit them during a main story mission. They belong to Simon Stagg, a rich man investing heavily into scientific research. Even though the area is small, the amount of Riddler Trophies isn’t much smaller than on the city’s islands. If you want to collect them, take a look at our detailed Stagg Airships Riddler Trophies guide.

Panessa Studios is a once-famous movie studio in Gotham City. It’s now used by the Bat family as a one of their bases of operations – this is where Robin is working on findind a cure to Batman’s ailment. It consists of three thematically different areas – a haunted house, a small town in the wild west, and a music stage. While doing missions in the Studios, you’ll have the chance to collect a bunch of Riddler Trophies, and most of them gave us a hard time, so we wrote a detailed guide on Panessa Studios Riddler Trophies.

The Arkham Knight Headquarters is the secret base of the mysterious villain. You’ll get the chance to visit it late in the game, and it will be the last major area you’ll unlock. It’s small, but filled to the brim with collectibles. Most of them only appear once you’ve finished the boss fight, so you’ll have to return after the mission. Since a lot of them are well hidden or guarded by puzzles, we’ve written a detailed screenshot guide about Arkham Knight HQ Riddler Trophies.