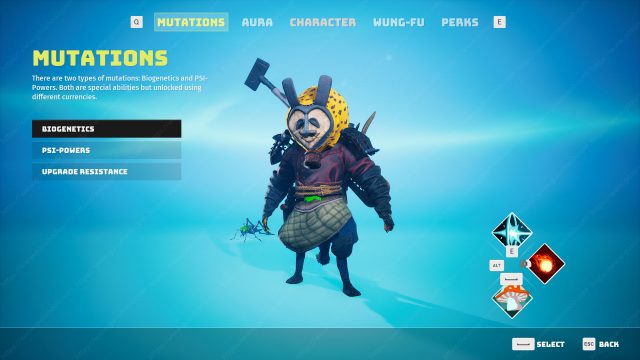 Mutations in Biomutant basically unlock spells, or abilities as the game calls them. One form of abilities are Psi-Powers and they are directly affected by you Ki Power stat. You unlock these abilities with psi points. They are gained by praying to Psi point shrines. There are 30+ Psionic Shrines in the game and some of them are in the open world. Easiest place to find them though are various tribe outposts. Each of them has a Psi shrine at the entrance.

Other type of abilities are unlocked through Biogenetics. They require Bio points. These are acquired by killing certain type of enemies called Morks. They can also be found in biocontainers. These are found as part of area objectives in various places throughout the game. Visit a nearby point of interest and you’ll probably come across some biocontainers. Best sought after in biohazard plants and chug stations.

Biomutant Psi-Powers How to Unlock Both Light and Dark Psi-Powers?

Under the Psi-Power mutations in Biomutant you will notice that there are spells, or abilities as the game calls them, that have a certain requirement of light or dark points. These points are what the game calls your aura and you get them through various decisions throughout the game. Whenever you choose to do something evil you get a dark point. Light points are acquired through good deeds. Many players worry that if you chose to be good at the beginning of the game you won’t be able to unlock dark point spells and vice-versa. This is not the case. You can choose to play half the game as light and once you gain enough to unlock all light psi-powers you can start earning dark points. This will not subtract from your light points. You can be morally ambiguous in biomutant. 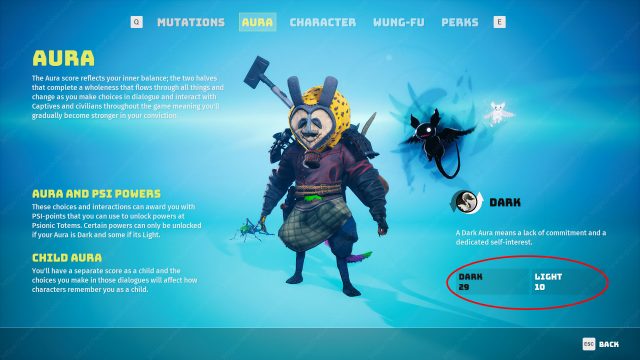 Another option is to have one light side playthrough and in new game plus go down the dark path. You will keep all your abilities and gear from your first playthrough and can now get all the dark stuff. In a single playthrough you can get light points each time you rescue a prisoner. These are all marked by one of the side quests. You can also capture small critters and choose to pet and release them. To get dark points you can burn down small camps usually found near outposts. You can also decide to kill small critters you catch with your net.

Effects of mutations found in the character menu do not change the physical appearance of your character. To physically mutate your character and change its appearance you have to find mutation spots. These are special places in the game that require one Bio Point, in exchange for which you’ll be able to change the physical appearance of your character. Check this guide out for the location of one such spot. There is also a side quest that will allow you to change the fur color and other attributes of your look. Check out our Biomutant change fur colorguide. However, this has nothing to do with the light and dark Psi-Power Abilities & Biogenetics.

Biomutant Light and Dark Psi-Powers list of abilities and requirements

We wanted to list all the Psi-Powers and the required amount of light and dark points for each so you don’t have to go through the game menus while farming your aura. We hope this helps you decide which aura and abilities to go for when planning out your Biomutant mutations.