Modern Warfare 2 campaign early access is now live, but many players are already having a lot of problems. For starters, many can not even launch the game yet, as they are unable to download the pre-release update. And then when they are finally able to enter the game, they are greeted by another annoying issue – the game requires them to change the name. If you are getting the “your current display name is not allowed” message but you can not change the name as you don’t have a rename token, here’s what to do. 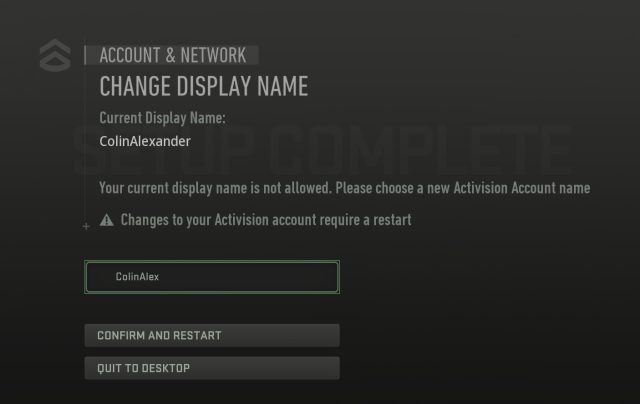 The day has finally come, the Modern Warfare 2 campaign is here for those who have early access. Alas, instead of enjoying the campaign, many players are suffering from various issues at the moment. The most annoying one currently is that almost everyone has received a message that their username is not allowed. This happens even though your name is seemingly perfectly fine. Even if you’ve been using it for years, now it is forbidden all of a sudden. But that’s not even the worst part. Rather, you are forced to change it, but the game tells you that you don’t have a rename token to do so. So, what to do?

The most important thing to point out is that this is a bug, and you should NOT try to change your name!! You most likely have a perfectly fine username. However, this “Modern Warfare 2 Change Display Name” error is currently plaguing early access players. Many are reporting about the issue on Reddit and social media. I know that it sounds bad, but you will simply have to wait until the bug is fixed. Hopefully, the developers are working on it as we speak and you will be able to jump into the campaign soon. We will make sure to update the article as soon as there’s more information.

PREVIOUS POSTGotham Knights Multiplayer, How to Play Co-Op with Friends

NEXT POSTModern Warfare 2 Campaign Stuck on Stay With Your Squad

If you want to know how to complete the Forza 5 Money Pit Treasure Hunt,…