If you’ve lost all your Polyatomic progress after the Modern Warfare 2 Season 1 Reloaded update, rest assured that you are not the only one. This annoying glitch has been troubling many players since the launch of the mid-season update. Read on as we explore why the game doesn’t track progress towards polyatomic. Also, is your MW2 Polyatomic Camo progress deleted forever or not? 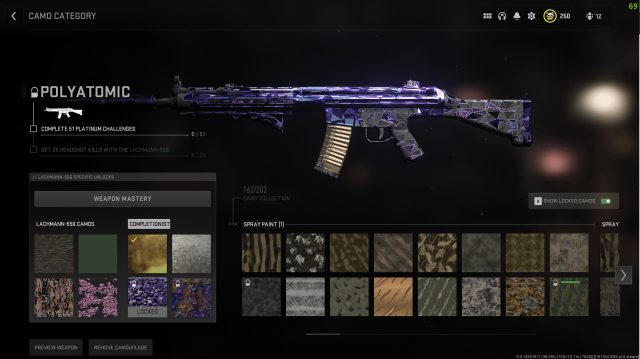 If you’ve lost your Polyatomic camo progress, unfortunately, there’s not much to be done. A similar camo bug already appeared in November when Season 1 launched. Now, with the Season 1 Reloaded update, players are experiencing the same issue.

“I’m working on Longshot for platinum right now, and my green bar that used to be in polyatomic is no longer there,” says Reddit user u/DiscGolfFreak. “I went from 20 guns platinum (showing in the green bar inside the polyatomic) to 0”. Other players report a similar issue: “I had 48 out of 51 weapons to unlock Orion. Just hopped on, and it says zero. But I still have poly on my weapons,” wrote u/JDOGmill66.

So, is there something you can do to fix this “Polyatomic Camo Progress Deleted after the Season 1 Reloaded update” bug? To the best of our knowledge, there are currently no working solutions. Logging in and out doesn’t work. Restarting or reinstalling the game doesn’t help either. Using the “repair” and “verify the integrity of game files” features is also futile. The only silver lining here is that, according to some players, the tracking towards camo progress is actually working. Some players claim that they have made progress even if it doesn’t show on the progress bar.

For now, that’s all we know about this annoying bug. If you’ve lost your MW2 Polyatomic Camo Progress as well, make sure to report the bug on the official forums. The more people complain, the better the chances of it being fixed soon. If we stumble upon any working solution, we will make sure to update the article. And, of course, if you know of some workaround, share it with us in the comments!/p>